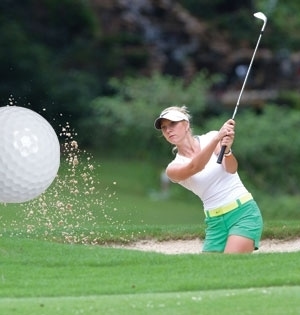 Symptoms and Treatments for Uterine Fibroids

Few things are more motivating than a parent’s love for their child, but a child’s love for their parents is powerful too. When siblings Dean and Lauren Judson lost their parents, Jim and Beth Judson, in a 2010 plane crash, they knew they had to do something to commemorate them. Lauren, an avid collegiate golfer at the University of Southern Mississippi, wanted to honor her parents with a golf event. Jim and Beth had tirelessly supported Lauren’s golfing aspirations, so it seemed like the perfect choice. With the help of family friend Jackie Cannizzo, the JCI Foundation was formed to house the golf event Lauren dreamed of.

“Sports help young girls to have a sense of belonging, build confidence and self-esteem,” Cannizzo says. “Sports also teach us so many life lessons, like team work, collaboration, discipline, hard work, attitude, leadership and empathy. There is no down side to getting young girls into sports.” Keeping these ideas in mind, they formed the Judson Collegiate and Legends Pro-Am Challenge, for which Cannizzo now serves as tournament director.

Now in its third year, the annual event features three components: the Pro-Am Scramble on June 27, the Legends Tour 1-Day Tournament on June 28, and the Collegiate 3-Day Competition from June 28 to 30. This third competition invites collegiate female golfers like Lauren herself a chance to compete with their peers and play one round alongside a professional female golfer – some of the best LPGA Legends players and a few Hall of Fame members will be in attendance.

This inspiring pairing motivates girls to keep working toward their goals in sports, both so they can earn their spot in the world-class tournament and so they can meet their role models. Maribel Lopez Porras, the 2013 Judson Collegiate champion, says, “Playing the Judson Collegiate has been one of the most amazing experiences of my life. It was the perfect combination of golf, experience and talent.” Not only that, but it also raises money for Children’s Healthcare of Atlanta and the JCI foundation to support young women through positive mentorship and further education.

The event also includes a leadership conference to complement the sporting events. Last year a two-hour workshop brought women like author and speaker Becky Blalock, golfer Kathy Whitworth, entrepreneur LeeAnn Maxwell, Dr. Lisa Perez and others together to teach young women how to take control of their careers. This year, the leadership conference has grown to a half-day program. Canizzo says, “Ideally we hope that these young people walk away knowing about the business culture in 2014, business etiquette and communication. We hope they leave with the thought that the C-suite is reachable if they want it.” Young women in high school and college, whether they’re golfers or not, can attend this conference for free with a student ID.

Whether it’s keeping girls active in sports or inspiring them to go for their career goals, no doubt the JCI Foundation is a fitting way to remember Jim and Beth Judson. The wonderful work they do is no less than they did for their own daughter, who carries on their legacy today. To get involved, visit www.judsongolf.com for more details.

Evening – Concert in the Park

As a skilled golfer, one of Golf Digest’s Top Ten Teachers in Georgia and a dedicated mentor of all ages and skill levels, Jackie Cannizzo was a natural choice to lead this event. The event’s other leaders recognize her unique ability to help varied groups work well together, as well as her fearless support of causes she believes in.

Since moving from Brazil, Luciana has played on the LPGA Tour for 12 years, recording several Top 10 finishes. Holes-in-One: 4

Pat started playing at age 11 under head pro John Wirbal and is now a member of Florida International University Hall of Fame. Holes-in-One: 6

Cindy has played golf since age 7 and joined the Michigan Golf Hall of Fame in 2003. Holes-in-One: 2

Rosie served as co-vice president of the LPGA Tour Player Executive Committee in 2003. She is also an Atlanta resident. Holes-in-One: 5

Barb joined the LPGA in 1987 and has served as spokesperson for the Ohio Girls Golf Foundation. Holes-in-One: 3

Val was named GOLF Magazine’s 1982 Collegiate Player of the Year and is currently the chairwoman of “LIFE” – LPGA professionals In the Fight to Eradicate breast cancer. Holes-in-One: 4

Sherri won eight tournaments on the 1986 LPGA Tour as well as the 1992 du Maurier Classic and the 2006 Women’s British Open. Holes-in-One: 2

Jan began her pro career on the Australian LPGA circuit and was honored among GOLF Magazine’s “100 Heroes” in 1988.

Sherri joined the LPGA in 1984 and won 3 LPGA Tournaments, including the 1988 LPGA Championship. Holes-in-One: 7