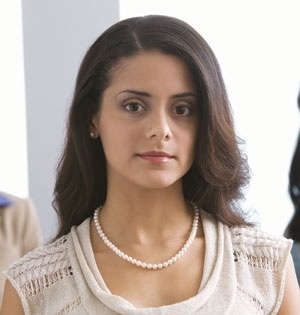 Is your menstrual cycle heavier, more painful and longer than it should be? Should that discomfort you feel during intercourse be happening? Many women overlook the symptoms of uterine fibroids because to them, their abnormalities seem normal. After all, you’ve never had someone else’s period, right? Surprisingly, up to half of all women may develop fibroids in their lifetime. For African American women, the numbers are even more alarming, estimated at 80 percent. Because uterine fibroids are so common, it’s important for all women to understand the implications and symptoms of this condition as well as the various treatment options.

What is a Uterine Fibroid?

A fibroid is a smooth, abnormal growth of uterine tissue muscle, and 99.7 percent of fibroids are benign. Dr. Nathan Mordel at Gwinnett Medical Center explains, “For all practical purposes, if you have any disease or medical condition that is 99.7 percent benign, you don’t have to address it as possible cancer.” While most fibroids are benign, they do vary in size, location and number. A woman can have a single fibroid or multiple fibroids, and their size and location play a major role in the characteristics and severity of a woman’s symptoms.

Dr. Boyd Byrd, a radiologist with Roswell Radiology Associates at North Fulton Hospital and Roswell Imaging Center, says, “Only approximately 10 to 20 percent of women with fibroids are symptomatic.” If you are in that group, it is common to experience disruptive symptoms like heavy menstrual bleeding, clotting and pain. Dr. John C. Lipman at Emory-Adventist Hospital points out, “Sometimes the woman has been bleeding heavily for so long, she does not realize that it is abnormal.” A woman’s period should last three to four days without clotting or pain. Dr. Lipman continues, “If you change pads more frequently than every three hours or use more than eight total pads or tampons a day, it is abnormal and needs to be evaluated.” Frequent urination is another possible sign. If you’re running to the bathroom more than usual during the day and multiple times at night, make a note to tell your doctor. Also, any physical discomfort during intercourse isn’t considered normal. If you’re experiencing discomfort, talk to your doctor. Frequent constipation is another symptom and is often the most commonly disregarded.

Because fibroids are very hard, their location and weight can inflict pressure on different parts of the body. If located near the center of the uterus, the fibroid can stretch the lining. If stretched too far, the lining isn’t able to heal properly, which causes heavy menstrual bleeding and clotting. Some fibroids block the bladder and disrupt the flow of urine, which – you guessed it – causes frequent urination. Fibroids located near the cervix are responsible for causing sexual discomfort. Those located near the back of the cervix press against the colon, causing constipation.

While most affected women experience these symptoms in their 20s and early 30s, many other women don’t become symptomatic until they reach their 40s. Dr. Thomas Murphy from Quantum Radiology explains, “Fibroids usually shrink in size or involute after menopause, but fibroids can continue to be a problem for post-menopausal women if symptoms persist.”
Dr. Byrd adds, “Most commonly, fibroids will become asymptomatic since hormonal stimulation will decrease with menopause. However, women who receive hormonal replacement therapy (HRT) may have fibroids which will not decrease in size or disappear.”

Sometimes, Dr. Byrd continues, they may even increase in size. In that case, another consideration is the rare chance that the growths are cancerous. “If a fibroid grows post-menopause or there is excessive bleeding, a condition called leiomysarcoma must be considered,” Dr. Byrd says. Thankfully, this cancerous condition is exceedingly rare. Dr. Byrd says there are more likely causes for post-menopausal bleeding, such as break-through bleeding from HRT, endometrial hyperplasia or endometrial cancer. So whether or not fibroids are the culprit, if you notice unusual symptoms during or after menopause, have a consultation with a physician familiar with these conditions.

It’s not completely understood what causes uterine fibroids, but it’s generally accepted that genetics are to blame. The gene responsible hasn’t been isolated; however, as the topic is researched further, doctors are able to suggest possible preventative measures. Dr. Lara Hart from Georgia Elite Obstetrics and Gynecology explains, “Some risk factors and associations with fibroids are diets high in red meat and low in vegetables, higher consumption rate of alcohol and early onset periods.” Dr. Thomas Murphy from Quantum Radiology adds, “There are studies showing that women who get more exercise do have a lower incidence of fibroids.” Basically, many practices that benefit your overall health could potentially help with fibroids too. Another of those practices is maintaining a healthy weight. “As fibroids are estrogen sensitive, keeping oneself at a normal weight may help with the condition,” says Dr. Melissa Seely-Morgan at Radiology Associates of DeKalb. “But it is genetic,” she continues, “and the best measure is to know your body and follow your fibroids for life-altering symptoms.”

Because fibroids are genetic, the low possibility of prevention can be discouraging. Fortunately, diagnosis is relatively quick. During your annual gynecologic exam, your doctor may actually be able to feel or see the fibroids upon examination. If the fibroids are too small, however, an ultrasound or X-ray may be used to verify their presence, size and location.

If you do end up with a diagnosis of fibroids, treatment may not be necessary, especially if you don’t show any symptoms. “Most women are unaware that they have these growths and will go their whole lives without an issue,” explains Dr. Hart. However, for many women, fibroids can be extremely inconvenient and sometimes life-altering. It varies from case to case. This is also true for the various treatment options. Dr. Hart continues, “Fibroids can be treated many different ways, depending on the patient’s individual situation and what her desire for the ultimate outcome is.”

For a woman who no longer desires to become pregnant, the two most common treatments are hysterectomy or embolization. A hysterectomy is the complete removal of the uterus and will trigger menopause, whereas embolization carries a lower risk of menopause. Embolization works by injecting the uterus with small particles, blocking the blood supply to the fibroids, causing them to shrink and die. This option is minimally invasive and carries a low risk of triggering early menopause. However, because its effects on fertility aren’t completely understood, patients are advised to avoid pregnancy following this treatment.

For others, there are options that have fewer implications on fertility, such as a myomectomy. “During a myomectomy, the fibroids are removed from the uterus,” Dr. Hart says. “This may require cutting them from the outside, inside or both sides of the uterus. Women are then encouraged to allow a few months of healing before attempting pregnancy.” Despite the recovery period, this procedure can ultimately leave the patient’s fertility unaffected, meaning that uterine fibroids do not have to be a sentence of infertility.

These days, the removal of fibroids, whether through hysterectomy or myomectomy, may be performed using a minimally invasive laparoscopic surgery. Small incisions are made and, using a camera and operating instruments, the surgeon can completely and safely remove the fibroids. Embolization is even less invasive than surgical routes. Whichever treatment you choose, know that all of your options will likely be much less of an ordeal than in years past.
With as many as half of all women being affected by this condition, it’s extremely important for women to understand their bodies and recognize abnormalities. This knowledge enables women to communicate effectively with their doctors and ensure the successful diagnosis and management of uterine fibroids. But as Dr. Lipman says, it’s important to remember, “If a patient has no symptoms, no treatment is usually necessary.”

Real-Life Recovery
Local woman Tania Leah Davis’ story began when she first noticed some unusual symptoms. She experienced everything from extreme cramps and heavier than normal menstrual bleeding to pelvic pressure, frequent urination, blood clots and even iron deficiency anemia. Upon talking with her OB/GYN, she was told that fibroids were causing her symptoms and that a hysterectomy was basically her only option. “I was devastated,” Davis remembers, because she still wanted to have children. “I decided to get a second opinion.”

Her search led her to Dr. Randell, who recommended an abdominal myomectomy. Through that process, he was able to remove 90 fibroids and successfully repair Davis’ uterus. “I went into surgery weighing in at 130 pounds and came out weighing 117 pounds!” Davis recalls. After two weeks, Davis was up and about, and after four weeks, her menstrual cycle returned. “It was not heavy at all, with no cramping or blood clots,” she says. Though she did still need a few weeks to recover fully from the anemia, today Davis experiences no symptoms or remaining negative effects.

She says, “My advice to other women who are experiencing issues with fibroids is definitely to see a physician.” Doing so helped Davis change her day-to-day life. “The pain [of the fibroids] was awful, but not knowing if I would experience spotting or bleeding from day to day was horrible! I no longer have any of the symptoms I had before the surgery. I can honestly say that I am happier than I have been in a long time.”