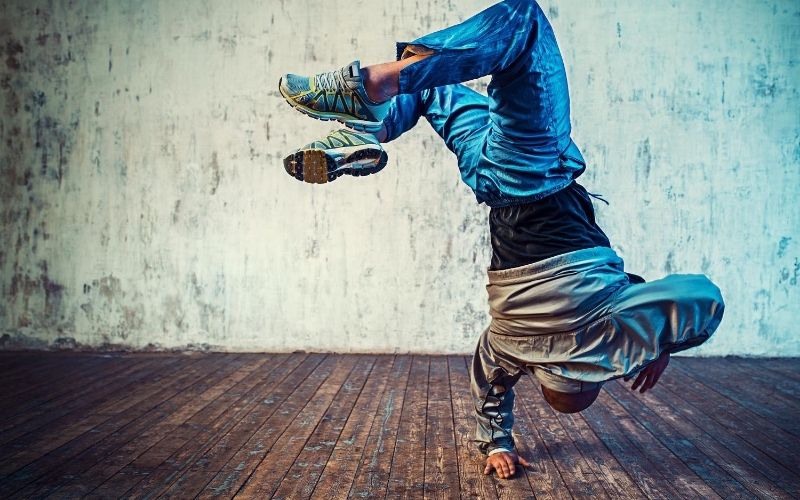 There aren’t many dance instructors who are the same age as their form of expression, but for Honey Rockwell, that’s precisely the case. She and hip-hop dancing have evolved alongside each other over the past four decades, and now she’s helping choreograph its future.

Rockwell, 45, is dedicated to sharing her love of hip-hop through her school, Rockwell Dance Academy, which she opened four years ago in Acworth with her husband, Orko, a fellow dancer. What started off as a small community dance-off, ended up being something way bigger. “I recruited my daughter’s friends and some kids from the neighborhood. We had a blast! We would put on performances for the neighborhood. As more kids started joining, our basement was getting too small to fit everyone. So then we moved it to the garage, then I rented space at a recreation center, and finally, our studio.”

The type of dancing she specializes in is breakin’ (also referred to in popular culture as breakdancing). Her mission is to preserve the original dance styles of hip-hop. “My passion is teaching dance, my experiences, and what I can share with the next generation,” she says.

In addition to the array of classes for kids offered at the academy, there are classes for adults who want to move in ways they may not have ever tried before.

Because hip-hop and breakin’ are still such relatively young styles of dance in the history of the art form, Rockwell says she has had to forge her own ways of sharing them with her students of all ages.

“There’s no template for what we’re doing now,” she says. “I’m always challenging myself to make my students believers of this dance style. It’s about just going for it and having fun with it at any age. I love showing my students that this is me and this is what I turned out to be!”

Rockwell got her start dancing as a young girl growing up in the South Bronx, where hip-hop itself was born. She was studying gymnastics and dance by the time she was 7. As a teenager, she competed with the gymnastics team at John F. Kennedy High School and competed for the United States Gymnastics Federation (now known as USA Gymnastics).

The transition between the gymnastics mat and the dance floor was a natural one. While most high school students were busy keeping tabs on their crushes, Rockwell was connecting with many of the key pioneers of breakin’ in New York, including Louie New Wave (who has since passed), Ghettoriginal Dance Production, the Rock Steady Crew, and VII Grandmasters. By the time Rockwell was 23, they had recognized and nurtured her skills, claiming her as one of their own: a true “B-Girl.”

It was during this time that Rockwell says she learned some of life’s toughest lessons, all of which she says went into making her the disciplined, balanced and focused woman, business person, and mother she is now. As a very young mom, she had to rely on the help of her grandmother to keep things together as she worked as a gymnastics coach and made a name for herself in the competitive dance culture.

In 1994, Rockwell began performing and touring with the Off-Broadway hip-hop musical, “Jam on the Groove,” which went on to tour nationally and internationally. It was in that show that she met her future husband, “B-Boy” Orko. (The two remained in each other’s circles over the years, eventually marrying when Rockwell was 40. They moved to the Atlanta area in 2010 with Orko’s job at a utility company.)

After her tour with the show, Rockwell danced in the Vegas theater production, “Madhattan,” and was cast in the movie “Mannequin 2.” She also performed on MTV’s New Year’s Eve 2000, and at the VH1 Fashion Awards with Cuba Gooding Jr., and Kid Rock. She still remembers the experience vividly to this day. “It was nerve-racking and exciting at the same time. Plus, it was awesome to dance with Cuba Gooding Jr., who happens to be a B-Boy as well by the way—insider scoop!”

In the early 2000s, with the Seven Gems Crew, she took part in a U.S. government-sponsored tour teaching hip-hop dance and performing in Brazil. She also produced Honey Rockwell’s B-Girl Video, the first B-Girl dance video, which can still be purchased today, and in 2008, she was a dancer and actress in the Grand Theft Auto IV video game.

As she reflects on life in her mid-40s, the youngest of her three children now a teenager, and life as an empty nester on the horizon, she is looking forward to finding new ways to enjoy dancing.

“I’m in this beautiful place in my life and I want to be an example for others. If you stay on a good path and learn discipline within yourself, you can have a better life,” she says.

Her gaze is also focused on the future and expanding her dance school and continuing to spread the breakin’ and hip-hop dance style. “Dance is an opportunity to release stress; it’s therapeutic. It allows me to step into a world of fantasy. I love breakin’ because I love the feeling of accomplishing challenging moves. It’s a total body strength-training workout.”