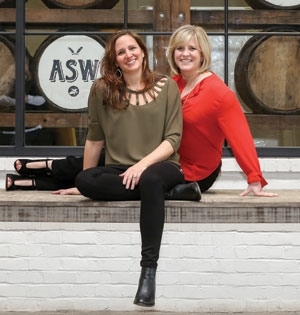 Changing Lives Inside and Out

For over a decade, Atlanta Food & Wine Festival (AFWF) founders Elizabeth Feichter and Dominique Love have built a partnership that supports charitable giving, nourishes community, celebrates Southern cuisine and, now, even plants a vineyard … right smack in the middle of Midtown Atlanta.

The two met years ago, when Love worked at The Coca-Cola Company and Feichter at Hands On Atlanta; they were part of a team that connected those organizations for community action initiatives. In 2003, Love started the company Corporate Community Outsourcing (CCO) to continue such efforts on a wider scale, helping corporations and nonprofits maximize their impact on the community at large. Feichter joined CCO and, together, they developed projects with a wide range of clients from Fortune 500 companies to small nonprofits, from NASCAR to Food & Wine magazine. 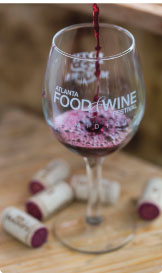 Their work with Food & Wine magazine planted the seeds for the Atlanta event. Love recalls their initial consultation about nine years ago: “They said, ‘Your timing is perfect! We’re about to celebrate the 25th anniversary of the Food & Wine Classic in Aspen and the 30th anniversary of the magazine and we want to give back to the community.’ We came up with a concept that focused on increasing consumer access to locally and sustainably grown foods—the Grow For Good campaign. We launched that and it propelled us into this world of food and drink.”

Once immersed in that world, they felt compelled to create a festival based in Atlanta that would celebrate and educate people about Southern cuisine. Love admits, “We pushed ourselves to limits I didn’t even know were possible.”

In May 2011, the table was set, the linens pressed, the dishes piled high and the first Atlanta Food & Wine Festival launched … with Feichter watching from the production office as she nursed her three-month old son. She says, “I remember looking out the window [at the festival activity below] and thinking, ‘We DID this! All of that out there! We brought it together.’ It’s a legacy we want to leave.” 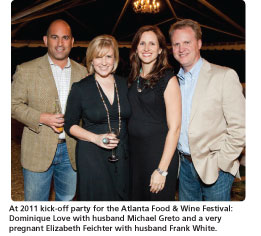 The applause and accolades rained down immediately as the Festival was greeted with a sort of “where-have-you-been-all-my-life” enthusiasm by presenters and attendees alike. Love and Feichter had tapped into something special—exploring the richness of Southern culture through its food and drink with some of the most talented chefs in the region educating people about methods and motivation.

“The Festival is about the South,” Love explains. “We are, in many ways, marketing this region through the narrative of its food and drink. It is a rich story. If you go every year, you are deep into the novel. You can’t talk about [all] Southern food in one weekend. We’re really working to shine an international spotlight on what’s going on here. There is a ripple effect to that. When a small business says to us, ‘I’m about to open a store in Atlanta, thanks to you and thanks to the Festival, now we are in a place where we can actually expand,’ we know that this is really important.” 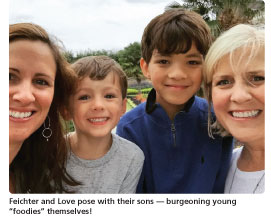 Feichter agrees, “We have such talent in the South. They’ve been here for years, if not hundreds of years. We’ve got pitmasters that have handed down generations of knowledge.They’ve always been here and we’ve always known those magical little places where you can get something to eat that you can’t get anywhere else.”
And they’ve brought that magic and legend and history to Festival-goers through their collaboration with those sharing that same passion. Chefs join restauranteurs, sommeliers, vintners, mixologists, brewers, distillers and epicureans to form the AFWF Advisory Board, which designs the programming for each year’s event. Presenters bring their knowledge and expertise into the classroom and workshops of the Festival’s Learning Experiences, teaching everything from grilling techniques to pairing tips to food history. And the tents … oh, the Tasting Tents. Rows upon rows, table after table, bar after bar—laden with decadence for an endless gastronomic adventure. Special dinners, parties and the ultimate package, the Connoisseur’s Experience, combine for a three-day sensory bonanza with a Southern drawl.

This is conscious-eating at its most elevated level, pulling every principle of “eating well” into sharp focus. Feichter and Love advocate culinary awareness far beyond festival planning. “For us, food carries such meaning,” Love shares. Her mother had a catering business when she was growing up; she and her husband have always been avid cooks and entertainers, and those interests became a family focus after adopting their son seven years ago. Now the family sets new intentions and heads to the farm later this year. “We’re moving down to Serenbe and raising pigs, among other things. We’ll have our garden and have been working on the garden plans together. My son flips through cookbooks and gets totally psyched about it. He is NOT a picky-eater!” 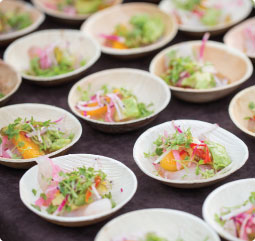 Feichter concurs, “I feel like it’s influenced our families and our appreciation for food—how it’s brought to the table, how it’s raised, how it’s grown, the care that’s taken to feed people, feed families. We have a garden at our house and [my son] plants it with me. So, why does he love lima beans out of the garden? Because he grew them. Why is he fascinated with peaches? Because he picks them off a tree and brings them into the kitchen. To blow his mind even further, I can introduce him to a chef and say, ‘Watch that chef take that bean and turn it into something fabulous that you are going to love!’ We’re proud of what we’ve done and when people come together around the table—and I think of AFWF as a big table—for my family to see that I was even a small part of it makes me proud.”

Love goes on to say, “The bigger thing for our kids is growing up with entrepreneurs. I want my son to see that we had a passion and an idea and took the chances. We took the risk. We believed in ourselves enough to make it happen. It’s not an entitlement. You don’t wake up and have your dreams delivered to you. You make it a reality through hard work and falling down and detours.”

“And, it’s okay for them to see you with your head in your hands sometimes,” Feichter reassures. “This is hard. It’s okay if you need someone to pat you on the back every once in awhile. For us, the strong friendship, having each other … we’ve been able to hold each other up, to grab hands and say, ‘We’ve got this!'” 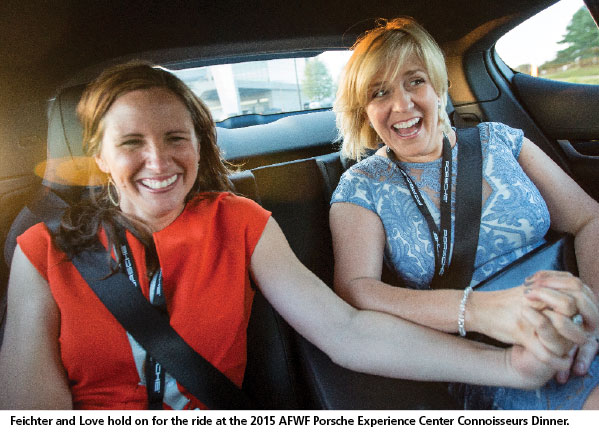 Those hands have clutched tighter recently as Love conquered two different of types cancer in a little over a year. With a very prominent history of breast cancer in her family, Love was already vigilant about regular mammograms. She confesses that her July 2014 early-stage diagnosis did not totally shock her. She underwent a bilateral mastectomy and soldiered forth, attending crucial corporate planning meetings only three weeks after surgery—”I got my hair and makeup done, took some pain pills, wore layered outfits and sat through the whole thing.The second cancer, thyroid cancer, however, was a surprise.” But, again, her doctor caught it early and she was able to tackle it. “I was extremely fortunate to get two treatable types and because I didn’t require chemo or radiation.” She armed herself with positive thoughts, a team of supporters and doctors and, then, she says, “fought through every poke, prod, exam, surgery and treatment to get to victory!”

It’s been a rollercoaster ride … for both of them. But these two let no obstacles get in their way; they are armed with supportive husbands and a yin-yang friendship that functions at an intuitive level. From raising babies to raising funds to contracting talent to kicking cancer, they’ve been by each other’s side through it all.

This year, AFWF celebrates its sixth anniversary and adds some new people to the mix—their team is now part of the London-based IWSC Group, Ltd., which originated as the International Whiskey & Spirit Competition and then expanded to include several other prestigious beverage events. With the acquisition of the Festival, IWSC now forays into the culinary realm and establishes their North American office with Love as CEO and Feichter as COO. 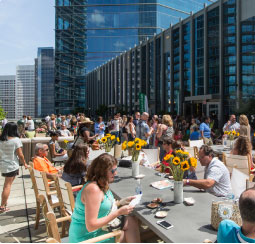 Feichter explains, “They said, ‘We’re interested in moving into the U.S. marketplace. Are you interested in selling AFWF? We’ve been watching you for the last couple of years.’ We said that we’re not interested in selling it outright, but through a series of conversations we found the perfect meeting of what we do, and [also] how to do these other larger initiatives. I think we are at a different chapter. The Festival has grown up, we’ve passed the five-year mark, we put a stake in the ground with a successful event that has a long-lasting opportunity behind it. So, what does the next five years look like? How does IWSC take shape here in North America? How are we helping to guide that? We really are in partnership with the group in London, setting the course for what the food and beverage entertainment industry looks like in North America.We thrive off of what comes next! Finding the next big thing drives us, and going big drives us and never settling drives us. Quiet doesn’t work for us.”

No, quiet does not work for them. And the delicious noise they make echoes once again through Atlanta when AFWF serves up its fare from June 2 to 5. The Learning Experiences will be presented at Loews Atlanta Hotel and the Tasting Tents this year move over to Piedmont Park Promenade—including the brand-new experience of the pop-up Vineyard in the City, which is an actual vineyard planted just for AFWF and remaining in place through July 30 for community enjoyment. The roots of the Festival continue to spread deeper and further as its influence grows, nourishing new ventures and inspiring the next generation. Visit atlfoodandwinefestival.com for full event details and to purchase tickets.