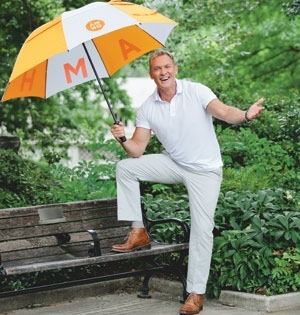 Men’s Health: The Boys Are Back

It was early 2010. Sam Champion, the beloved, award-winning weather anchor for ABC’s top-rated “Good Morning America” was dealing with something that was all too familiar to him: skin cancer. His first diagnosis came in his mid-20s, and by his mid-40s, he knew the drill. He had five suspicious moles, and they had to be checked and treated by a dermatologist. “The problem is that there is no way to treat it other than to cut it out,” Champion says. “But I’m on television every day, and that means that other people are aware of what’s going on. When I have scars and loop stitches, people notice.”

Twitter was just taking off, and Champion decided to reveal his skin cancer history to his growing number of followers. “It wasn’t a conversation people were having on a regular basis. I just wanted to discuss with people why I had these scars and stitches,” Champion explains. “I was so taken aback. I got a huge response. People were sending me pictures and asking if I thought they had skin cancer. I thought, ‘We need to create awareness. People don’t want to feel like they’re being preached to, but we need get people talking about skin cancer.'”

With that in mind, Champion decided to have surgery live on air that May. He had a spot of basal cell carcinoma, the most common type of skin cancer, removed from his left shoulder. The well-received piece allowed him to share more details about his personal experience and gave him a platform to create a new level of understanding about skin cancer. “I wanted people to know what I didn’t know. When I was a kid, there was no discussion about skin cancer. You were told to get your first good burn of the year, and then your skin would acclimate. But I was a blond, blue-eyed kid. And every time you burn, you damage your skin,” he notes. “The only way to prevent skin cancer is to use some kind of protection against the sun. Today, there is a huge variety of skin care products that include sunscreen. Those aisles in the stores are miles long, and they’re there for a reason. Anyone can get skin cancer.”

It’s that kind of straightforward, educational discourse that has endeared Sam Champion to the millions of viewers who watch him every morning on television. Of course, today they tune in to The Weather Channel, Champion’s home since early 2014, when he left GMA to serve as anchor of the flagship morning show “AMHQ: America’s Morning Headquarters” and managing editor for the Atlanta-based weather network. The move may have surprised many people, but for Champion, it was a completely natural step. 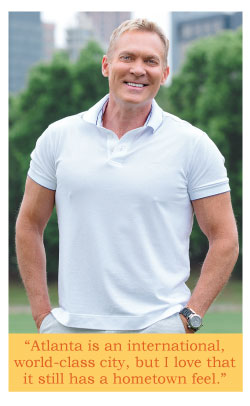 “I’m a project guy,” he asserts. “A lot of people like to plan their career and know where they want to be. That was never me. I like a project. We took ‘Good Morning America’ to number one. We did that, so that project was done. And the opportunity with The Weather Channel came at a really wonderful time.”
With a plan to move away from longer-form programs and reemphasize the weather again, The Weather Channel offered the perfect environment – and new project – for Champion, who was a longtime fan. Like many, he had become disillusioned by the shift in programming in recent years and was thrilled to hear about the new strategy. “I was a Weather Channel viewer. Like everyone else, I had to have my weather,” he says. “And they wanted to get back to weather full time.”

Champion’s love for climate and science proved to be a perfect match for The Weather Channel’s plan of action. The excitement of revamping the network’s quality programming brought Champion back to the enthusiasm he felt during his earliest days in the industry. “In the ’80s, the thing that excited me was live television. You could get a truck out there and be on a live feed and actually show people what was going on. Then in the ’90s, there were all of these incredible computer graphics being used for the weather. It was something you’d never seen before. It was very visual, and I was drawn to that,” he explains. “Today, we have even more knowledge. We can be live anywhere around the world in a moment’s notice. And there really is zero competition for The Weather Channel in terms of being able to do that.”

The feeling of admiration clearly is mutual. “Sam is one of the hardest working talents I have ever come across throughout my years in the television industry,” says Nora Zimmett, senior vice president of live programming for The Weather Channel. “Not only is Sam terrific on air, but he is also an incredibly talented producer. He is able to view AMHQ and the whole network from multiple perspectives, which helps in the entire 360-degree production.”

The opportunity also felt like the right move for Champion and his husband, Rubem Robierb, who married in December of 2012. New York City had been home to the couple, but relocating to Atlanta offered Champion the chance to do something that he truly enjoys. “I love learning a new town. I love exploring,” he observes. “I grew up a military brat. My dad was a Marine, and we moved all over the world.” Interestingly, Atlanta never made the list of cities in which he lived. In fact, the only time he visited the metro area was to report on the weather, from the severe droughts to the crippling ice and snowstorms of the past few years. However, once he and Robierb arrived, they quickly became taken with their new hometown.

“We’re outdoors people. We love the bike paths around the city, and we love living by Piedmont Park,” Champion says of the couple, who split their time between Atlanta and Miami. They also enjoy the many dining options the city boasts. “The weight gain is horrible,” Champion admits. “There is such good food here. If you’re a gourmet or a foodie, Atlanta should be at the top of your list when it comes talking about food that excites you. It’s an incredibly delicious city.”

For Champion, it also feels like the best of both worlds. “Atlanta is a wonderfully progressive town. It’s an international, world-class city, but I love that it still has a hometown feel,” he says.

One thing Champion isn’t as crazy about in Atlanta: pollen season. In fact, he jokes that his first year in Atlanta almost sent his body and his red, swollen eyes into shock. Fortunately, year two has been a bit easier on his sinuses. However, he is still waiting for the temperate winters he was promised before he left the Big Apple. “Since we’ve been here, we’ve had double ice storms, brutal cold and gray winters. I’m waiting for that nice, mild winter,” he laughs. “But spring in Atlanta is amazing. When the season rolls in, you can go outside and just feel the warm sun. And the tulips and flowers look like they exploded overnight. Does someone come in and plant them in the middle of the night?”

While Atlanta has been a great fit for Sam Champion, he has been an equally great fit for The Weather Channel. And whatever he’s reporting, from major weather events to skin cancer awareness and beyond, viewers can depend on his information being as fascinating as it is useful. It has become a hallmark of his impressive 27-year career. “Everyone loves an interesting tidbit,” he concludes. “This is a new Weather Channel. It’s about providing ongoing education with a purpose. We’ve spent a year now putting The Weather Channel’s focus on the weather again. It feels good. It feels like a success.”