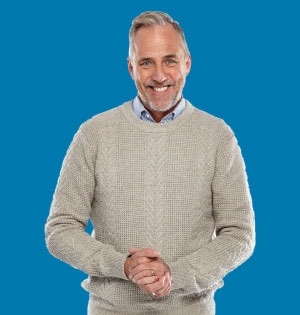 Annual check-ups are a crucial part of staying healthy – after all, you don’t know what steps to take if you don’t know where you’re starting. In addition to your regular check-ups, it’s especially important for men to check things like their PSA and cholesterol levels to avoid the health issues that commonly take guys out of commission. (Find out more about those tests on p. 17!) These three Atlanta men learned the value of regular check-ups and broad lifestyle changes after their own health journeys. Now, with closer attention on their health, these boys are back and feeling better than ever. 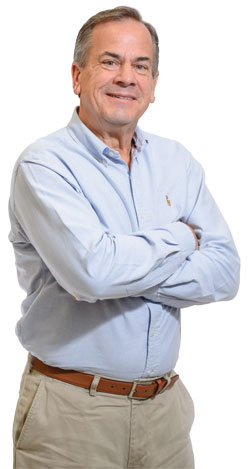 Cancer hit Ron Pavuk hard. Up until late 2013, he considered himself pretty normal: he didn’t exercise regularly, he ate a typical American diet and he dealt with everyday stresses as best he could. There was no history of cancer in his family. He experienced mild acid reflux, but he considered that fairly common among men his age. Then, in the fall, he began to have problems swallowing. In December, a scope procedure detected esophageal cancer. After that, as Pavuk describes it, “Two weeks of musical chairs in different doctors’ offices had me feeling even more lost than when I was first diagnosed.” Finally, he found the Cancer Treatment Centers of America and began his battle.

“My treatment was five weeks of daily radiation with chemo weekly,” he recalls. On May 2, 2014, he underwent a surgery to remove the cancerous mass. The surgery also removed part of his esophagus and pulled up his stomach to replace what was removed. He recounts: “Five days later, my surgeon came in for my morning check-up with a bigger smile than usual. ‘It’s gone,’ he explained. The treatment had worked.”

In the weeks that followed his surgery, Pavuk was on a strict diet to aid his recovery. As a result, he lost more than 50 pounds and he won a new lease on life. He saw the errors of his previous lifestyle: he had been overweight, his diet was unhealthy, he had too much stress and he didn’t exercise regularly. So after he recovered from his surgery, he changed his lifestyle. He “stopped letting the little things bother me,” as he puts it, and he now makes healthy choices for what he eats, including as much organic food as possible and proper planning. “Prior to my healthy diet, there was no planning for what I was eating – I ate whatever I felt like or wandered into that particular day,” he explains. “Now, I plan my meals more strategically. Before going out to eat, I decide in advance what I’m going to eat when I get there instead of going with impulse.”

Besides overall healthier living, one of Pavuk’s main takeaways from his bout with cancer is that early detection is the key to faster recovery. You never know when that annual check-up might help stop a disease in its tracks.

Selflessness is often praised as a virtue, but as Dr. Ken Nears has learned, you must also take care of yourself if you want to be alive to help others. As a single father who was granted custody of his daughter when she was 11 months old, Nears has spent more than 20 years devoting his time to caring for others. His history also includes the launch of a mentoring program for middle-school minorities, volunteer work for the American Red Cross and foster parenting for at-risk youth. When he was diagnosed with prostate cancer in 2010, his frustrations about the lack of treatment information available caused him to again think of helping others and develop a website (prostatecancerassessment.com) that serves as a one-stop shop for prostate cancer information.

Since his diagnosis and subsequent treatments in 2010, Nears’ cancer has never officially been in remission. That fact, combined with the shock of his brother’s death from a massive heart attack a couple of years ago, has led Nears to recommit to his own life. “I decided, if I was going to die from anything, it wasn’t going to be from stupidity,” Nears says. He began by eating “a simple, healthy diet,” he says. He also started working out at a gym, and he took up tap dancing as a hobby. Then he found the Dance 101 dance studio. Offering classes in both mornings and evenings six days a week, Dance 101 allowed Nears to dabble in several dance styles and stay motivated.

Nears also focused on reducing the stress in his life. Prior to his diagnosis, he was a workaholic. “I taught full-time at a local university, conducted psychotherapy on the side and attempted to start several businesses,” he says. “I believe that all of these factors combined, including my lack of rest, contributed greatly to my cancer by weakening my body’s ability to keep dormant cancer cells under control.” To reduce his stress, he makes a constant effort to think positively, visualize his goals, relax, stay centered and balanced and take time for reflection. As a result of his diet and exercise changes combined with his lifestyle changes to reduce stress, Nears is now 50 pounds lighter. “I look and feel better now than I have ever felt in my adult life.” 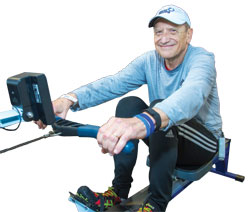 He’s been rowing for 48 years, since the age of 13. He’s a three-time Olympian. He’s a 64-year-old who works out two hours a day. Luis Aparacio is not a person you’d expect to suffer a near-fatal heart attack.

Yet earlier this year, when he was competing with the Atlanta Rowing Club in the world’s largest two-day rowing event, the Head of the Charles Regatta in Boston (his eleventh time competing in the event), he suffered a massive heart attack mid-race. In the hospital, the doctors put him into an induced coma, and his wife was instructed to prepare for the worst.

“In the morning, I was dead, and in the evening, I moved my toes,” Aparacio says. Indeed, his recovery was miraculous. Nine days later he was transported to Atlanta, and he began cardiac rehabilitation at Emory Saint Joseph’s Hospital. “The first day I walked into rehab, I wasn’t able to put one foot in front of the other,” he says – he had suffered nine rib fractures from the CPR administered during his heart attack. “After three months of constant hard work, I got in shape and gained 87 percent of my muscle back.”

He adds that, at 153 pounds, he is in better shape now than when he was prior to the heart attack. “I will always be grateful to the cardiac rehab staff,” Aparacio says. “They saved me and encouraged me to go on and fight for a better life.”

So what caused Aparacio’s heart attack? He had a blockage in one of his arteries due to high cholesterol. “My biggest regret is that I should have seen the signs of heart problems and [monitored my] cholesterol levels,” he says. Today, he advocates for awareness of your body’s health. “Eat well, exercise hard, sleep, take no salty foods, avoid fat and junk food,” he says. “Be grateful to God for your family and your friends, and don’t forget to go to your doctor for as long as you live.”