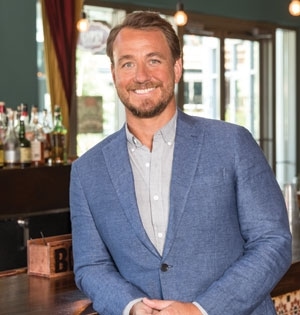 Chris Hadermann brings excellence to every pursuit. From his many business ventures, personal health and fitness goals to philanthropy that feeds the soul, he is the ultimate entrepreneur.

One evening out with the boys changed Chris Hadermann’s life in 1996. Tired of the Buckhead party scene, the recent Florida State University grad and friends decided to create East Andrews Café, an upscale yet unpretentious hangout for fellow 20-somethings. With a bachelor’s in finance and marketing, Hadermann possessed book smarts, passion, and a natural ability to recognize a glaring gap in Atlanta’s social landscape. “East Andrews Café was such an incredibly fun and rewarding springboard for me,” he says. “But I eventually realized I was more passionate about creating fun concepts centered around food, wine and conversations than the bar and nightclub industry.”

If you have ever been to the Spanish-Moroccan tapas restaurant Gypsy Kitchen, you know it’s hard to miss the iconic metal bull at the bar. Much like the bull, Hadermann, 46, is determined in his efforts to not only elevate Atlanta’s restaurant scene, but also to stay fit, give back, and constantly strive for what’s next.

The self-described serial entrepreneur can always be found exploring new real estate opportunities or brainstorming up-and-coming business concepts. His most recent endeavors include becoming a local franchisee for the California-based hair salon sensation, Drybar, and the owner of the historic Monte Vista Hotel near Asheville. How does he keep up with it all? Not only is Hadermann intentional about his professional moves but he’s also deliberate about his fitness and health.

“I get up in the morning to get some fitness activity in. I have a routine that I at least try to go to Flywheel twice a week, do yoga at Thunderbolt Power Yoga once a week, and lift twice a week at The Forum Athletic Club, and that’s like the bare minimum just to keep me sane,” Hadermann says.

His latest fitness goal? Mastering the art of meditation. “Many successful people meditate and it’s just really good for you, spiritually and metaphysically. So I’m trying to quiet my active mind and do more of it whenever I can,” he says.

When it comes to nutrition, Hadermann admits that when he’s sampling cuisine for new eatery concepts in New York, California, or most recently, in Mexico, calories don’t count. Not all of these excursions are filled with decadent meals though. As a matter of fact, a healthy restaurant is up next on his launch list! All of Southern Proper Hospitality Group’s restaurants are designed to be “experiential,” so it’s natural that much of the inspiration for new concepts and existing ones come from Hadermann’s own worldly experiences. “Travel has become my favorite hobby. I love exploring new places, meeting interesting people and the conversations that come along with that. And of course, experiencing the local culture through the food and drink from the area,” he says. “My friends describe me as fun and adventurous.”

But when the enterprising foodie is home, he focuses on eating clean. His meals consist of lean meats or fish and he will often chow down on salads and other nutrient-packed roughage. “Also, once a quarter, I do a bone broth cleanse where all I eat is bone broth for four days,” Hadermann says. “The collagen in the bone is really good for your stomach and your gut bacteria. Plus, it is a calorie restriction and helps me reset my system.”

Outside of traveling, day-to-day duties, and practicing mindfulness, you can find the laid-back businessman exploring the cuisine along Buford Highway or venturing to Edgewood to check out its quirky bar scene.

The ambitious executive recruits friends, family, and colleagues to join his philanthropic efforts such as the Southern Proper Hospitality Golf Tournament. Hadermann began the annual event as part of his campaign to be the Leukemia & Lymphoma Society’s Man of the Year in 2016. This year’s tournament will take place on Oct. 1 with 100 percent of the proceeds supporting the Atlanta Community Food Bank.

Giving back is huge for Chris Hadermann. His advice for budding entrepreneurs? “The hardest part is finding the thing that you’re going to do,” he says. “Once you hone in on what you are passionate about, then you must find the courage to take that first step and just do it. More often than not when people finally do step out and get started they often look back and say they wish they would have done it earlier.” SPHospitality.com