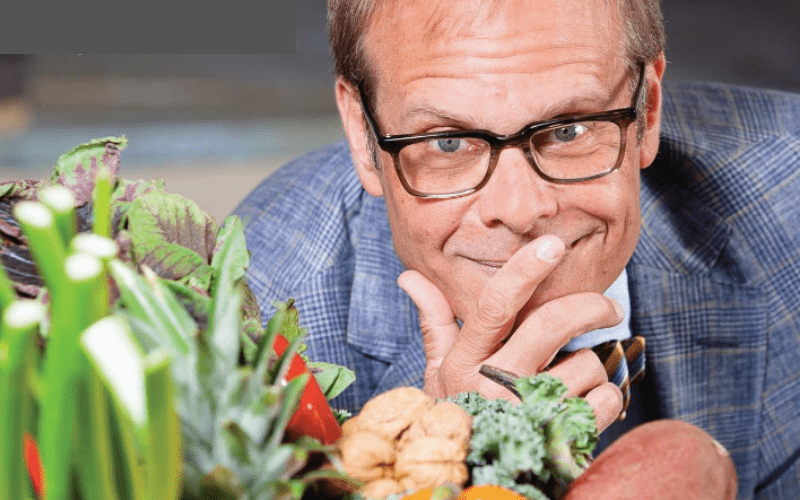 12 Health Symptoms You Should Never Ignore

Despite a busy career, high-pressure work, and dizzyingly frequent travels, Alton Brown never skimps on his health. Not surprisingly, the food expert who has become known as the sort of nutty professor-chemist of the kitchen has honed eating healthy into a science with his four-list method, which has helped him lose 50 pounds and keep the weight off for more than two years. Brown pinpointed foods to eat daily (like leafy greens and fruits), several times a week (like yogurt and avocado) and just once a week (like red meat), as well as foods to cut out completely (like diet soda). Brown says he’s not sure if he’ll put his personal plan into book form, but he is open about sharing it with others when asked. It was featured in the “Live and Let Diet” episode of Good Eats and on The Dr. Oz Show. (See picture below for a complete breakdown of the four lists).

Brown says the selection of the foods for each list came largely from the years of nutritional research he gleaned from his years doing Good Eats. The motivation to create a plan based on what to eat and how frequently to eat it came out of his personal needs and past experience.

“Having wrestled with weight my whole life, I knew that a diet based on denial—based simply on don’t do this, don’t do that, don’t eat this, don’t eat that—would ultimately fail for me. I rebel against that. I knew if I was going to design a plan that had any hope of success, it would have to be based on not things I couldn’t eat but things I had to eat, because that’s more proactive.

“So I came up with this concept that there are a great many foods that are extremely high in nutrition that you ought to be getting every day, some things several times a week. And I balanced that with the things that did need to be restricted which is the once a week and never list, then I could find some things that I could live with.”

Brown believes it’s crucial to bid a permanent farewell to certain foods that are just plain bad for you. “The real importance of the ‘never’ list is that you have to make a commitment that there are some things in your life that you’re going to give up and you’re never going to have again. And there’s not a diet that I know of that ever said, ‘You know what? You’re going to say goodbye to some things forever.’ I actually think that’s important because it’s a symbolic life change that says ‘I’m turning a corner.’ It’s a statement of ‘I’m making a permanent change.’ That’s important from both a psychological and nutritional standpoint.”

Brown broke his 30-year habit of drinking four or five diet sodas (Diet Coke or, before that, Tab) a day. “There’s nothing really worse for you than diet sodas,” he says. “I was a complete diet soda addict.” He also ditched fast food and his “bad influence” food: milk. When he drank milk, it led to eating cookies, cake and other treats. “I broke a pattern that was harmful for me,” he says.

Desserts are now a one-day-a-week food. Those rare treats serve as motivators, making you look forward to them all week. “Anticipation is actually a very potent tool,” he says.

Give food a chance

In many cases, Brown says, it’s not so much the foods themselves that are the problem, but what you coat, slather, sprinkle and fry them in. “What you would have to worry about is what you put on things.” He says by changing his eating habits, he reset his palette. Now when he eats a sweet potato, he enjoys it without the dollop of butter that used to top it. “You’d be amazed how delicious food really is. If you get your diet adjusted properly, your tastes change and you respond more to the natural flavors in things.”

If foods don’t taste good au naturel, chances are the problem is with the food itself. Out of season produce simply won’t pop the way just-picked fruits and veggies do. “If you buy food in season when it’s at its best, guess what? It tastes good! Give food a chance to taste good again.”

Eating more healthfully is a matter of shifting focus, Brown says. “There are things we need. It’s more about concentrating on the things we ought to have rather than things we shouldn’t. If I’m going to function at my highest level, I need high-level nutrition. The problem comes from what we’re not eating.” 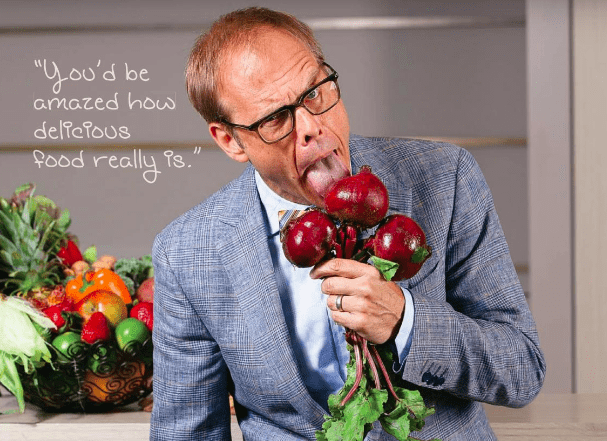 At the center of Brown’s philosophy about food and health is the concept of taking personal responsibility for each and every bite we eat. Unfortunately, the abundance of fast food and processed meals makes that more of a challenge for many people than it sounds.

“It’s just really easy for people to shirk responsibility. You’re handing the responsibility for feeding yourself to someone else [when you eat fast food or processed meals]. You have to hunt and gather. It takes effort, thinking, energy.”

Association is key, Brown says. Surround yourself with good foods that can be readily consumed, and you’ll be setting yourself up for more success. “Don’t have temptation sitting there. Don’t have the stuff around. If you have three good things standing by and reach for that instead, eventually you’ll get used to it.”

Brown says he pre-measures and packs snacks (almonds are a biggie) that go with him wherever he goes. He also brings along a travel blender for smoothies, which he says is an ideal way to get fruits and vegetables in easily. Though perhaps a less popular choice, Brown says cans of sardines are another great portable snack he enjoys. “I’m not going to be victimized by travel,” he says.

If you find yourself stuck in what Brown calls a “food desert” and you can’t get to a grocery store to load up on acceptable options, just eat as little as possible until you get to better meal options. And try not to eat alone when you’re traveling, if you can help it. “There’s not a whole lot worse for you than sitting down and consuming mass quantities, especially alone. Eat with other people in a communal atmosphere.”

After he began sharing his knowledge and perspective about changing eating habits to improve health, Brown says he was surprised to find out it was a very polarizing topic among his fans. Some even lashed out. “There are people who think I’m trying to push a lifestyle on them—that I’m judging them. But I say if you decide you want to be heavy, be heavy.  Whenever you do something that makes people realize they’re not taking responsibility for themselves, they’re going to get angry.” Brown pointed out that a friend of his who is a physician attributed 65 percent of his practice to obesity-related problems which are, for the most part, preventable.

While some have bristled, Brown says many more people tell him about their success with the four-list plan. “I run into people several times a week who tell me, [for example] ‘I’ve lost 70 pounds.’ One lost 127 pounds—that it absolutely works for them.”

In addition to sticking to his lists, Brown exercises every day, doing “whatever I can get.” Depending on his location, he runs, hikes, swims, works out with his trainer and lifts weights. “Weightlifting is the secret for men, especially. Weightlifting builds muscle, and muscle needs to eat.”

Brown says mixing things up with more than one type of exercise is key. He also prefers exercising three times a day, rather than in one long stretch. Whatever you do, just move. “I don’t watch a lot of TV and I don’t play computer games, because I’d like to live to be 80 years old,” he says. 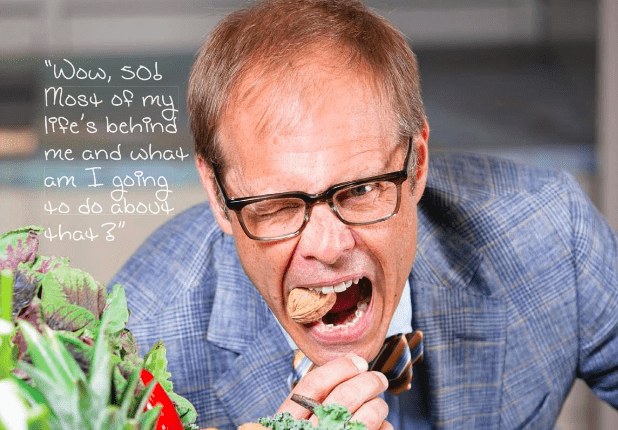 Although Southern cooking gets a bad, buttery rap these days, Brown says eating healthier doesn’t have to mean giving up on the richness of our region’s cuisine. “I will eat a massive amount of collard greens and a little bit of the meat. Instead of frying okra, I’ll stew the okra. Biscuits I’ll make maybe once a week and that’s my white starch. I’m not getting rid of any of that stuff, but I’m not going to load up with sugar and fat.”

Although Brown’s travels take him to LA, New York and everywhere in between, he says he loves living in Georgia and plans to stay. “I have great pride that I’m Southern. I like calling women ‘ma’am’. I like barbecue and cold beer and Lynyrd Skynyrd records. I want to raise my daughter in the South.”

As he celebrates a milestone birthday this month, Brown says his mood is reflective. “I’m like, ‘Wow, 50!’ Most of my life’s behind me and what am I going to do about that?” What he’s doing about it right now is just about everything, including spending valuable time with his wife, DeAnna, and daughter, Zoey, in Marietta. But he prefers staying busy. “Having time off scares the heck out of me.”