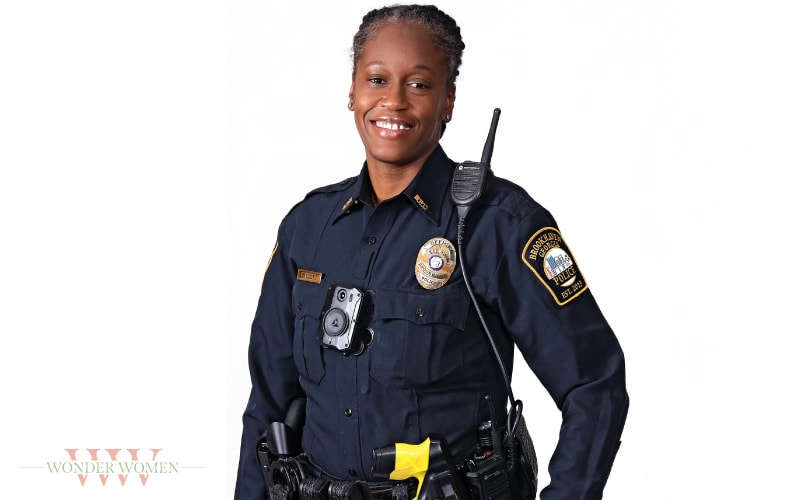 Wanting to make a difference is a common reason to go into professions like medicine, teaching and police work. And for some that reasoning comes from a more personal place than others. Officer Carlai Moore, 36, of the Brookhaven Police Department falls into the latter category.

“I had a close family member murdered because of mistaken identity. The troubled teen who shot him and the police officers involved is why I chose this field,” Carlai explains. “I believe I can affect change on both sides of an incident, so I became an officer.”

As both a Black woman and an officer, Carlai is used to breaking stereotypes. She has been an officer on the Brookhaven force for three years and also serves on the Honor Guard. “Many in my community don’t always see a black woman as a police officer. Everyday I come to work I’m changing the narrative,” she says.

On top of a global pandemic, social unrest has also been a factor in Carlai’s job, though she adds, “To be a black woman and a police officer has always had its challenges, even before the increased racial tensions and scrutiny.” While the landscape of policing has changed, Carlai says her approach has not. “I still operate with safety first, integrity and with an open mind. More than ever it has been my mission to have a good encounter with citizens. Even if I’m taking them to jail, their experience with me will be one of respect and possibly renewed hope that there are good officers still out in the world.”

While the world has changed dramatically for everyone, Carlai says it’s been especially hard on the homeless. “Shelters are closing their doors or limiting their spaces and resources are low. The interaction with the homeless has heightened and each interaction has been tough, because you are limited on the resources you can offer,” she says. So she has made it her personal mission to extend whatever help she can to those that she encounters. “While I may not be able to change their situation, I can offer a hot meal, locations for food pantries or maybe a place to shower and sleep or a mask to protect themselves.”

Carlai, who is originally from Kansas City, Kansas, says the first thing she’ll do when things get back to normal is fly home and see her family.