It’s not the most talked about subject around the water cooler … but it’s on more people’s minds than you would think. In fact, according to The American Cancer Society, prostate cancer is the most common form of cancer among men, after skin cancer. The good news has always been that it can be treated successfully in most cases; but gather round for a new conversation, boys, because now the news is even better.

Dr. Vahan Kassabian, Medical Director of Georgia Urology in partnership with Vituro Health, is the first and only surgeon in the state of Georgia to introduce the revolutionary HIFU procedure to treat prostate cancer. Originally from Canada, where the procedure has been approved for many years, he’s been successfully treating men with prostate cancer for over a decade. Now that the FDA has approved the procedure in the U.S., he brings his niche expertise to our community.

The acronym stands for high intensity focused ultrasound, something Kassabian describes using the analogy of a harmonic scalpel. The result is a truly minimally invasive, outpatient procedure without the side effects or downtime associated with radiation or the general risks of surgery. 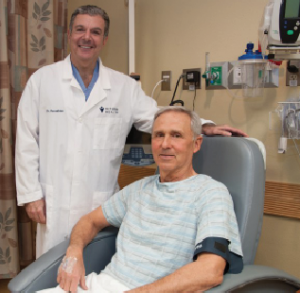 “With HIFU, I am killing as much or as little of the prostate cancer, or prostate gland, as I want, using heat,” said Kassabian. “People go home the same day. They don’t even need to take pain medication. They have a catheter for about 10 days, but they’re feeling great without any of the discomfort or pain associated with surgery.”

To say it’s labor intensive – which Kassabian does – is an understatement. The surgery takes anywhere from two to three hours and uses an impossibly tiny (3mm, to be exact-think a grain of uncooked rice) ultrasound beam. “

There’s a very steep learning curve involved with this procedure,” he said. “But I can avoid damaging surrounding tissue, such as the nerves responsible for erections. As I am treating, I’m looking at it, I’m getting a lot of technological feedback, seeing heat changes, visual changes and more, all in real time.”

Whereas traditional treatment options are surgery to remove the entire prostate gland or radiation to radiate the entire gland, HIFU allows a surgeon more control over how much tissue gets destroyed. Physicians direct the ultrasound energy, also known as sound waves, toward the diseased prostate tissue and burn away the malignancy. As a result, they can destroy only the targeted prostate cancer cells and leave surrounding tissue unharmed.

Surgery without the aftermath is reason enough to book the new surgery with Dr. Kassabian, but the benefits go beyond that. “This is truly an outpatient, minimally invasive procedure,” he reiterated. “But the biggest difference is a very low effect on sexual function.”

According to Kassabian, one year after the procedure, 90 percent of the men he has treated are still sexually able to function – something not guaranteed with traditional surgery to remove prostate cancer. This new procedure also helps patients avoid complications with urinary function and the short and long-term effects of radiation. In turn, it helps patients avoid secondary malignancies, often caused by treatment with radiation. In that sense, it’s also much more in line for people who are taking a holistic approach.

“I am using sound waves to create heat,” Kassabian said. “That’s about as natural
as one can get.”

Are Overactive Bladder Symptoms Holding You Back?

The Lowdown on Shingles