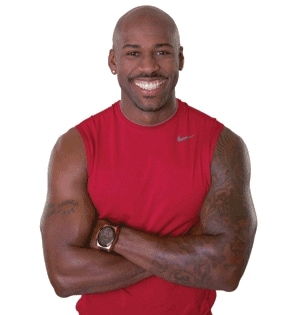 Give Her a Hand!

On NBC’s “The Biggest Loser’s” Thanksgiving special, the show’s newest trainer Dolvett Quince was asked what it felt like to be a part of something as amazing as transforming people’s lives. Since Quince has helped countless people lose weight during his career as a personal trainer, his answer was simple and heartfelt. “I can’t think of a better job. When you take someone from doubt to belief in themselves, I think that is one of the most amazing jobs on the planet.”

If you tuned in this past season to see contestants compete to lose pounds on NBC’s “The Biggest Loser,” then you’ve no doubt seen Quince in action. Most of the contestants on his team have agreed that he is the nicest person outside of the gym, but once they begin working out with him, he takes on a militaristic likeness, shouting his encouraging words and urging his team not to give up. “How bad do you want it?” he’ll exclaim. And it seems to work, as they all push themselves harder and respond to his motivation. Quince has always taken his job seriously. Even before he received that career changing call from the producers of NBC’s “The Biggest Loser,” he was the owner of his own gym in Buckhead and used his positive attitude and training skills to help people get healthy.  Quince has always been active, playing basketball and studying martial arts, however, only in the last 12 years has he taken his love of exercise to another level.

“My passion (for training) first started while I was working at the YMCA over on Ashford Dunwoody,” he explains. “I just started working there when someone (who worked there) approached me and asked me if I’d ever been certified as a trainer. They thought I had a great rapport with people and that I had a good psyche and said it just made sense, so I got certified and I kept building from there.”

Quince went from a corporate trainer to an independent contractor, and today he owns his own training facility, Body Sculptor Inc., along with his own staff of trainers. He formed Body Sculptor Inc. on his own and turned it into a successful business, but it really started booming in 2001 as he began to receive more high profile celebrity clientele. “When I started training my good friend Bert Weiss from The Bert Show, he started talking about me on the air,” he recalls. “I was doing well on my own, averaging two new clients a week. When Bert started talking about me transforming his body, my business tripled.”

Quince was in high demand with local people as well as celebrities like Justin Bieber, Boris Kodjoe and Michael Jai White, just to name a few. “I take a lot of pride in what I do and have a lot of attention to detail. I’m very involved with the development of my client, and I’m not distracted,” Quince explains. “I don’t just look at myself as a trainer, I look at myself as a transformer. If someone hires me, I’m going to take them from where they are to where they should be.”

When Quince realized he would not have enough time to dedicate to all of his new clients, he decided to teach others to train “the Body Sculptor way” as he built up his team. “I couldn’t be happier with the team of trainers I have,” he says. “They are as passionate about fitness as I am.”

When Quince received a call from the producers of NBC’s “The Biggest Loser,” he knew leaving his Buckhead-based business behind to go to California where the show is filmed would be difficult. But he also had a lot of faith in his team to hold down the fort. Since he had to split his time between the west coast and Atlanta, having his team in place made the transition easier.

Quince believes that many factors led him to have the opportunity to join the reality show. “I think building my career and starting to train celebrities, as well as having a private studio in Buckhead – all of that organically led me to this road.” Although this is his first season on the show, Quince is no stranger to pushing people to achieve their goals. He admits one of the most challenging aspects of being on the show is being away from his studio. But he is not one to shy away from a challenge or to forget the people whose lives he’s touched along the way.

“I remember I was working at the gym in Buckhead and there was this young lady who was getting married and I helped her lose 30 pounds and she fit into her wedding dress,” he recalls. “She came to me in tears handed me a gift card and a gift, and said ‘Because of you, I’m going to have the best day of my life.’ I knew in that moment I’m doing what I’m supposed to do.”

Whether training people on TV or in his own gym, Quince is someone who helps people with equal parts passion and tenacity. He marks his successes not only by his personal achievements, but also by the achievements of those whose lives he has impacted. Through it all, his positive attitude and passion has never changed.

On NBC’s “The Biggest Loser’s” Thanksgiving special, Quince’s closing remarks were simple, yet rang true. “We all have insecurities and doubt ourselves,” he said. “We don’t believe day-to-day that we’re the best we can be, but if I can be a tool to help someone both physically and mentally get to that space – then I love what I do.”

Where did you grow up and how long have you lived in Atlanta?
I’ve been in Atlanta for over 13 years now, but I’m originally from Connecticut.

How do you keep people motivated?
I advise people – don’t be hopeful with your workout, be specific, write things down – write down what your plan is and create a schedule. Maximize your time.

If someone could do one thing to begin their journey toward healthier living, what would that first step be?
Change your portion sizes and swap them out for clean options of food. Take away bad options.

How can people jumpstart their healthy lives in the new year?
My suggestion is clean out your cabinets and your refrigerator. Choose an entire month – let’s say January – to make a complete cleansing of your kitchen. If you’re eating chocolate, replace it with fruit. If you’re eating mashed potatoes, replace it with mashed cauliflower. You can still eat and be full, but be more selective.

What qualities do you have that have helped make you successful?
My confidence. Someone said to me once, “You have the ability – no matter who you’re training – to make anyone feel comfortable in their own skin,” and I think that is a God-given talent.

What charitable events are you involved with?
We started our first annual Body Sculptor food drive through the holidays for homeless shelters, so I’m very excited about that.

Who have been your biggest influences?
Ambitious people. People like Oprah Winfrey and Jay-Z who have built something out of nothing. I’m so inspired by businessmen and women who create jobs for other people.

What advice would you offer people who want to start their own business?
Stay consistent in your pursuit. Along the way there’s going to be a lot of people who tell you, you can’t do it, but there is a way to do it, so don’t be ashamed to ask for help. There are so many people in front of you who have gone down this pathway before you. It’s ok to ask for help. Don’t ever, ever, ever give up on your dream. Make it a reality through your words, deeds and actions.

What is an obstacle you’ve had to overcome in your life to get to where you are today?
I think any kind of success breeds envy. I had approached people in my industry and asked them about how to open a gym, tried to get advice from them. and they laughed and asked me why I would want to do that and told me I was fine where I was. A few years later I opened my gym and those same people who laughed at me leaned on me for advice and asked me how I did it.

If you weren’t in this line of work, what would you be doing?
I love to sing – a lot of people don’t know that about me. I’m pretty good at it!

Last book you read?
“The Power of Now” by Eckhart Tolle

What inspires you?
I’m inspired by my team of trainers. I really believe in those guys. They come up with different workouts and have great energy. They really know how to have a good time and the people in my studio say they feel that.