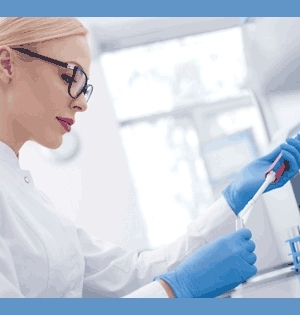 All mistakes are not equal. The famous leaning Tower of Pisa wasn’t meant to lean, but its construction on soft soil hasn’t resulted in much other than a charmingly tilted structure. The series of mistakes that led to the sinking of the Titanic, however, resulted in catastrophe.

Gene mutations are like that, too. A cell can replicate and slightly scramble the genetic recipe, swapping out one nucleotide for another. Perhaps the results produce nothing more than another “charming tilt” as the cells make do with what’s there. Or, that change in code may dictate devastating effects on the human body.

Genetic testing is a broad term covering a variety of purposes. The forensics testing used in criminal investigations identifies DNA in blood at the scene of a crime. Similar testing methods might also predict how well a woman with breast cancer will respond to certain medication. A few types of genetic testing even allow a little glimpse of the future, such as the predictive testing and the genetic tests done before the conception and birth of a child.

Each of our 50 trillion or so cells contains the DNA often called our blueprint. Encoded in DNA are the instructions for life—such as directions that tell cells whether they belong to the eye or the kidney, and whether their job is to pump blood or fight bacteria. DNA molecules are tightly wound and packaged into 23 pairs of chromosomes. These chromosomes are made up of thousands of genes, each with a specific function or the potential to activate new characteristics.

Occasionally gene mutations occur. Some of these are hereditary and known as the germline mutations from parents. The other kind, acquired or somatic mutations, crop up during our lifetime —UV rays from the sun, for example, can damage some genes, as can the chemicals in cigarettes. Sometimes cells simply damage themselves when they replicate.

Kimberly King-Spohn, a certified genetic counselor and manager of the genetics program with WellStar Health System, describes genetic testing to her patients this way: “When we do genetic testing, it’s like we’re proofreading a book. We’re looking for typos, extra letters and larger errors that change the meaning of the whole sentence.”

Dr. Mark Perloe, medical director at Georgia Reproductive Specialists, says, “We talk about genetic screening with every patient who’s thinking about getting pregnant. Each year, half a dozen couples come in after their first pregnancy was a disaster—either the child was lost or had mental insufficiency or another condition. An equal number come in having no idea that there is a 1-in-4 chance of their child having a genetic condition because they are a carrier couple.”

Carrier couples each have one copy of a mutated gene that, in them, causes no problems. But combine the two through reproduction and there is a 25 percent chance they will have a child with a condition like cystic fibrosis or sickle cell anemia, and a 50 percent chance that the child will be a carrier as well.

The American College of Obstetricians and Gynecologists recommends specific tests to certain groups (couples with Ashkenazi Jewish heritage, for example, should be offered a screening for Tay-Sachs disease), but there are additional options available. There are also prenatal tests administered to pregnant women to help identify conditions like Down syndrome. “We present the spectrum of what’s available and allow patients to self-identify with what meets their needs,” says King-Spohn.

As a genetic counselor, it’s her job to discuss the possible psychological effects of results before testing ever takes place. She must consider: “Would this information be valuable to the patient? Would it be useful to them to help direct their treatment or allow them to prepare for the future? Or would it just cause them anxiety? Would the knowledge hang over their head or make them unable to sleep? Then it’s not helpful.” For example, if knowing that testing positive for the risk of Down syndrome would not change the course of the pregnancy, the patient may not want to know at all. 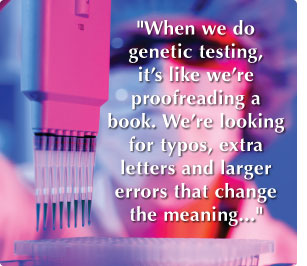 Predictive testing carries its own weighty decisions. It allows a doctor/scientist to scan the genome for genes known to be related to certain cancers. The best-known of these is probably the blood test for BRCA1 and BRCA2, genes known to harbor harmful, inherited mutations that sharply increase the risk of breast and ovarian cancer.

The medical options for women who test positive for BRCA can be tough, both psychologically and physically. Often, these results start a series of frequent mammograms and MRIs, possibly adding chemopreventive drugs or even risk-reduction surgeries such as the removal of both breasts and ovaries.

“Removing your ovaries is what saves your life if you’re BRCA-positive. The outcomes for ovarian cancer are dismal because we can’t find it early,” says Katie Lang, certified genetic counselor and Hereditary Cancer Program Coordinator at Northside Hospital. “But that’s a huge decision. It puts you in menopause. If you’re a woman who hasn’t had children or isn’t in a relationship, you have to start thinking about things like whether you want to do an egg harvest and freeze your eggs, or whether you want to adopt. You are suddenly under pressure to make life choices you thought you had more time to make.”

The big difference between carrier testing and predictive testing is that when there are two prospective parents present, they inherently have all the information needed. When testing for gene mutations like BRCA, it’s necessary to check in with the whole family.

Lang says that genetic counselors always joke about their nosiness. If your mother died of breast cancer, they’re not just going to ask you about her—they’re going to ask you about her mother, your sisters, and where your aunt lives so they can recommend a testing center. If your mom’s sister tests negative, then you don’t need to be tested for BRCA. She was the missing piece.

Genetic counselors are very careful to explain what test results can mean. A positive result for BRCA, for example, does not mean that you have cancer, or that you will get cancer. On the flip side, testing negative for BRCA doesn’t mean that you won’t get breast or ovarian cancer—most women with breast cancer do not have the BRCA mutation.

Both Lang and King-Spohn urge patients to talk to their relatives about their family’s medical history. “We can’t do genetics with just one person,” says Lang. “We solve the puzzle with everybody. That can be hard. Maybe your relatives have passed away, maybe they don’t want to be tested. Maybe you don’t have access to your family history or have a very small family. Risk is a spectrum, and we don’t know where you fall on the spectrum.”

There are researchers who, every day, spend hours in a lab looking for genetic clues to conditions like autism, diabetes and Alzheimer’s. They’ve already found puzzle pieces for breast and ovarian cancer, colon cancer and sudden cardiac death. The field will keep advancing, and it will save lives. While those facts don’t make the choices easy, the knowledge does empower patients with greater understanding.