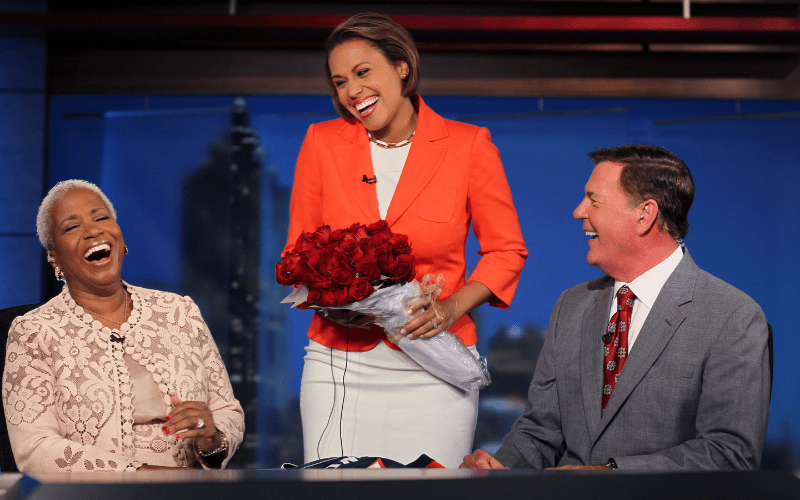 At five and six o’clock every weekday, Jovita Moore catches viewers up on the latest in Atlanta news. Before she takes her seat behind the desk, though, her work begins at two o’clock with a daily meeting, and then she rushes on to hair, makeup, promotions and the news itself, lasting well into the night for the 11 o’clock show. Moore jokes, “I used to be in bed at nine, and now that doesn’t happen ever.” But this nonstop pace is the best part of the job for Moore, and after a long journey to get there, she feels right at home in her role as anchor.

That journey started at home with her mother. “I grew up in a one bedroom apartment, and we only had one TV. So when my mother came home from work and turned on the news, I would sit there and watch with her,” Moore recalls. “I was the kid who always knew current events. I read the paper as a child, The New York Times and the Daily News, and then I would go to school and talk about it.”

Years later, a college professor suggested that Moore’s writing style made her a good fit for journalism. Running with his suggestion, Moore took a summer internship at the Amsterdam News in Harlem. “It was hands-on because the staff was so small. This was before the Internet, before cell phones, so I had to go out, get information, and come back and put together stories. After that experience, I guess I was bitten.” Moore would later work in the very offices of one of her favorite childhood reads, The New York Times, interning through her sophomore, junior and senior years of college.

“[My internship] was definitely a great introduction to reporting the news, but what was frustrating was that I’d be sitting in the newsroom and the same story that I was working on would already be live on TV. I started to get the difference of television news – the immediacy, the urgency.” In that pivotal moment, Moore decided to enroll in Columbia University for graduate school to learn more about the world of broadcasting. After graduation, she got a job at a New York Times TV station, where she wore a lot of hats and did so with enthusiasm.

“I had to carry around my own equipment, drive the truck myself, shoot the video and do the interview because back then I was a one-man band.” She parlayed that experience into her next job at a TV station in Fayetteville, Arkansas. The first time the camera was pointed at her, Moore remembers, “I was so excited. I just remember thinking, ‘I’ve got to get this right.’ I had to figure out how to get better so I could move up.”

This ambition served her well during her three years in Arkansas, where she was soon promoted to anchor. Then through her friendship with Ken Jobe, a fellow National Association of Black Journalists member, she took a job at a station in Memphis in 1993. Eventually she wanted to break into a bigger market – specifically a top 10 city market like Atlanta. With the help of an agent, and after a year-long job search, Moore arrived in Atlanta to join the WSB-TV team. “I came here [in 1998], not intending to be the main anchor, but certainly hoping I would have a long career. I was totally open to whatever the future held for me.”

Moore started off as a weekend anchor who was also out on the streets reporting and taking advantage of every opportunity that came her way. One of those opportunities came not from work, but from a routine health exam, during which Moore’s doctor discovered benign tumors in her uterus: fibroids. The lack of research about this condition led her to search for answers herself. “There were all kinds of theories, but there was nothing concrete, so I wanted to do a story on it,” she says. Moore’s report, “Women and Fibroids,” garnered a lot of attention, and she won an Emmy award for the piece in 2001. “It was a great feeling of satisfaction for me that I had won because it was my labor of love. It was a story that I felt was important and educational for women and viewers.”

That labor of love and the evident dedication to her career eventually earned Moore a primetime seat at the WSB-TV desk in 2012 when anchor Monica Pearson retired after 37 years. Remembering stepping in to that role, Moore says, “It was very exciting. I feel like I was very prepared for it because of Monica and the management at WSB-TV.” And the viewers have been behind her every step of the way. “They have been completely supportive and excited, and they are kind of on the journey with me.”

That journey continually pushes Moore and her colleagues to stay on top of their game. The immediacy she originally loved about television news has in some ways been eclipsed by social media, which is an even faster way for people to get information. Moore says, “Social media certainly keeps our newsroom on its toes. We use it to our advantage to let our viewers know we’re there, too. You don’t just find us on TV – we’re on the web, we’re on Twitter, Facebook and Instagram, too. Getting information from social media is simply a fact of life now, especially for younger people.”

So whether the ever-evolving face of news brings her online, behind the desk or out on the street to tell important stories on her own, Moore knows what she wants and isn’t afraid to keep working hard to get it.

What advice do you have for working moms?
Be flexible. You never know what the day is going to bring you.

What advice do you have for people wanting to get into journalism?
Learn the craft at an accredited journalism school, get internships, network as much as you can and find a mentor. Also, understand you have to start small and work your way up – this is not a myth. It’s real, and I think it’s the best way to build yourself on a solid foundation.

Who has had the most influence on your career?
I definitely have to give credit to my mother, Yvonne. Also people like Ken Jobe and editors at The New York Times who were very helpful and guided me, the people at WSB-TV, Ray Carter, my first news director who hired me and saw my potential, Marionne Pitman, who is a great manager, my makeup artist, Tymeka, who has been a great support, and my agent, Betsy, who helped me and stood by me.

What charities are you involved with?
I’m on the board at Genesis Shelter, which is focused on making sure that women and newborns are not homeless. Last year we did a Mother’s Day pampering day for the moms there, giving them massages and doing their makeup and hair. It’s a great place.

How do you stay fit?
Well, that is one of the challenges of this job. It’s like fighting between “Do I want to sleep?” or “Do I want to work out?” I actually started training for a half marathon, and then I hurt my knee, so I ended up going to a different trainer, David Buer at David Buer Fitness. I also do Pilates with Marie at Body Vision Studio in Brookhaven.

What do you like to do to relax?
Most of the time “relaxing” means being on the couch with the kids. And whether we’re just watching TV, watching a movie or reading, that’s what I try to do when I can. I feel like I’m turning into a foodie in my old age. I’m always going out to eat – I just went to St. Cecilia and loved it. And when I need to get away from kids and home life, then it’s the spa. I love the spas at the Mandarin, Loews and the Four Seasons.

What would people be surprised to learn about you?
People are surprised to find out that I am a big Jay-Z fan. They don’t equate a woman on the news being into hip hop culture, but it’s how I grew up.