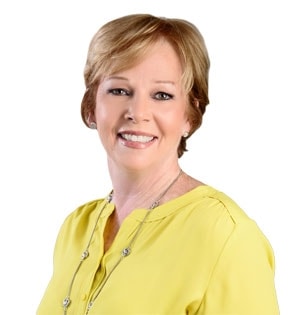 My Best Self: Tracy Nicole

When Jill Binkley received her second breast cancer diagnosis in 2007, she knew what to expect. The busy mother of three underwent the same treatment that she had seven years earlier at the age of 40: a mastectomy followed by chemotherapy and radiation. But there were some differences the second time around. For instance, the cancer was located in her left breast instead of the right one, and it surprisingly was not a recurrence of the first cancer – a rather uncommon circumstance. What’s more, during her second bout with primary cancer, Binkley was not as scared. And for good reason.

“By that time, I could turn to the people at TurningPoint,” says Binkley, executive director of TurningPoint Breast Cancer Rehabilitation, which she founded in 2003. “I had created my own support.” 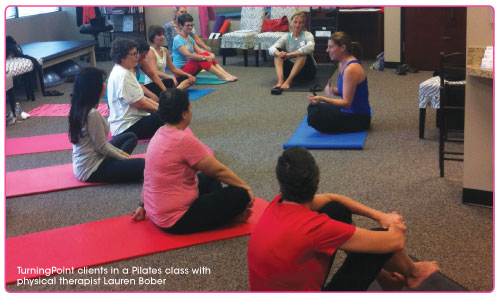 Starting a nonprofit organization that provides rehabilitation services directly related to breast cancer treatment was never something Binkley planned to do. However, her own experience opened her eyes to the need for the important services that TurningPoint now offers. “When I was first diagnosed in 2000, I was really shocked at many of the side effects of the breast cancer treatment, both emotional and physical,” explains Binkley, a trained physical therapist who specialized in orthopedics and sports injuries. “When you have a mastectomy, there is significant pain after the surgery. You can have difficulty moving your shoulder and arm. You have weakness and fatigue from the chemo. It can really impact your quality of life. And I developed lymphedema, a swelling of the arm that’s not an uncommon side effect. But I wasn’t aware of what it was.” Astoundingly, at the time, her medical team didn’t really have any resources to recommend to her as she navigated the ramifications of treatment.

“If you think about it, when you have major surgery on your knee, you’re referred to physical therapy or rehab,” Binkley observes. Yet, 15 years ago, no one extended those services to women who were diagnosed with breast cancer. And as Binkley researched her own issues and tried to find solutions during her first two-year recovery, she quickly realized that she was not alone. So, in 2003, she opened the doors to TurningPoint Breast Cancer Rehabilitation. Initially, she began with her own area of expertise: physical therapy that includes gentle, hands-on stretching, manual therapy and exercise for muscles that are stiff, painful and have lost range of motion after a mastectomy or lumpectomy. Then, over time, she and her team of professionals added services based on patients’ needs. “We would hear from patients about what they needed and what they weren’t receiving,” she says. Today, TurningPoint offers an array of clinical services, including specialized physical therapy and lymphedema management, massage therapy, counseling, nutrition guidance, an exercise program and a special program for women with metastatic breast cancer (Stage 4 breast cancer that has spread to other parts of the body). 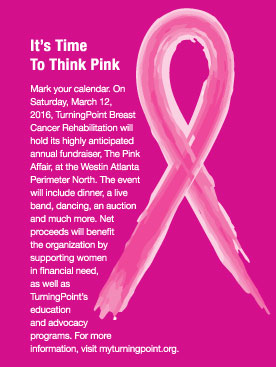 “Everyone on our staff specializes in breast cancer rehab. We know about the stages of breast cancer and its treatment and all of the physical and emotional effects,” Binkley notes. That’s because every person on staff has been touched by breast cancer in some way. She continues, “Each of us has either gone through it ourselves or has had someone close to us go through it. We have a lot of compassion for our patients because we truly understand their journey.”

That empathy is one of the most important components for the nearly 3,000 patients who have become part of the TurningPoint family over the last 12 years. “It can be difficult to talk to close family and friends. When you do talk about your fear and your concerns, you feel like you’re complaining,” Binkley explains. “Our patients feel like they need to be strong. And when they come in, many times this is the first time they’ve admitted that they’re having a rough time. We offer them a safe place to talk about these things.” Binkley points to one patient who summed it up perfectly. A wife, mother and full-time professional, the patient felt like she had to do it all without putting strain on anyone in her life. Binkley recalls, “She said, ‘Out there, I have to be Superwoman. But when I come here, I’m allowed to leave my cape at the door.'”

That’s exactly the type of support Binkley wants to provide to women with breast cancer, regardless of their financial situation. That desire led her to start TurningPoint as a nonprofit, which was an excellent decision. In addition to removing the financial barrier for patients who normally would not be able to afford such comprehensive services, the organization has the ability to implement new services and programs quickly when funding is available. “There is a push nationally to get these services into hospitals and other clinics, but being a community-based clinic, we’re light on our feet. It’s easier for us to respond quickly and provide patients with the services they truly need,” Binkley explains.

Fortunately, community support for TurningPoint has grown steadily over the years. In addition to grants from organizations like the Susan G. Komen Breast Cancer Foundation and the Atlanta 2-Day Walk for Breast Cancer, TurningPoint receives much of its funding from local donors – many of whom are former patients. “It’s amazing that you can affect someone so much that they’re willing to come back and support you like this. As a physical therapist, I was so surprised by that. It’s a very different model of care from the traditional rehab environment,” says Binkley, who has become a tireless advocate for bringing attention to the physical and emotional side effects of breast cancer treatment. Her work has led her to speak locally, nationally and internationally and publish well-received papers about evidence-based physical therapy outcomes and breast cancer rehabilitation. Through TurningPoint, she has taken on an educational role for the healthcare community, as well as physical and occupational therapists who want to specialize in this specific area of rehabilitation. And her efforts – as well as those of TurningPoint’s entire staff – are making a resounding difference. 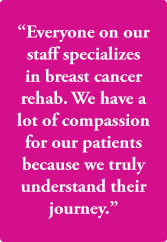 “We have oncologists and surgeons in the Atlanta area that automatically refer their patients to us now,” she says. In fact, TurningPoint sees 35 to 40 newly diagnosed patients per month from metro Atlanta and other outlying areas. “It’s wonderful. It’s so rewarding to be able to reach out and help other breast cancer survivors – to do this so other women won’t have to search for what I was searching for,” she adds.

Binkley also is thrilled that TurningPoint has become part of the research surrounding breast cancer rehabilitation. Recently, the organization partnered with Georgia Tech to help develop a way to identify lymphedema using three-dimensional photography and Xbox technology. The goal is to create a system for women to check at home on an ongoing basis so they can detect the condition early. Data will be collected through TurningPoint, which not only has the clinical experience necessary for such an endeavor, but also a state-of-the-art lymphedema measurement device that no one else in the region has in a clinical setting. It’s the type of innovative, forward-looking effort that TurningPoint is perfect for.

“We named the organization TurningPoint because that’s what our goal was – to be a turning point for breast cancer patients,” Binkley states. “That’s the most important thing for us. We want women who are going through breast cancer to know that we understand that there is so much going on physically and emotionally, and we can help. All women in the United States deserve this kind of care. That’s my ultimate goal – to be part of a woman’s standard of care.”

Of course, there are challenges, including serving women who are going through something so familiar to the TurningPoint staff. “It brings back memories,” Binkley says. “But at the end of the day, even if it feels sad or scary, we realize that if we’re not here for them, who will be? And we get over it. We think about them. We put that ahead of everything else.”

For Binkley, that message is crucial, especially being a two-time breast cancer survivor. She sees herself and her staff as role models for women who are newly diagnosed or in the middle of their own journeys. “We’re here, and we’re healthy. We want to give them the message that they can get through this,” she concludes. “And we want to say to them, ‘We’re here for you. We’ll walk by your side.'”