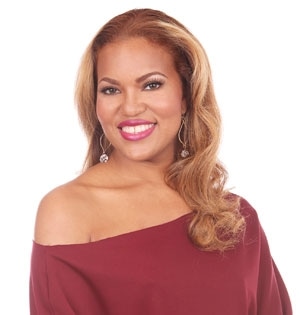 With more than a decade of experience in the fashion industry, Atlanta designer Tracy Nicole has achieved national recognition and built a celebrity-studded client roster through her Tracy Nicole Clothing line. Just a few years ago, Tracy had achieved success in her work and as a mom to two girls, but everything changed when she was diagnosed with breast cancer in her 30s. Tracy’s in remission now, but she learned some valuable lessons during a tough season of her life.

Where did your passion for fashion begin?

It started really, really early with my grandmother. Every closet in her house was full of shoes and clothes. I taught myself to sew in high school, and I could cut out some fabric, sew it up into an outfit and wear it that night. But I grew up in a household where being creative was not supported; you became a doctor or lawyer. So I studied Occupational Therapy at Florida A&M University. After school, I started working seven days a week and became a workaholic. I made a lot of money but wasn’t fulfilled. So I applied to fashion school and took classes at night. I realized how much I loved fashion because I’d work a full 12-hour day and then go to fashion school and feel like the day had just started.

How did you transition to a full-time fashion career?

In my Fashion Merchandising class, I created a business plan and eventually used the plan to open my Tracy Nicole store in Smyrna. I carried at least 50 different designers. After five years I was ready to do my own thing, so I closed the store and opened a design studio. Then two years into opening the studio, I was diagnosed with breast cancer.

How was the cancer discovered?

My mother is a three-time breast cancer survivor, so I had been heavily involved with breast cancer awareness. I even donated profits from my store opening to Susan G. Komen. My sister and I would talk about going to get mammograms, and we finally made an appointment. My sister’s tests were negative, and mine weren’t. That was a blow – totally unexpected – and I didn’t know what to do. I was thankful I went to get tested, but it wasn’t supposed to be like this. I decided to have an elective bilateral mastectomy.

How did you deal with your diagnosis?

I started to look for other young people’s stories that had breast cancer, but the ones I found were heart-wrenching, and that’s not what I wanted to read right then. I decided to start a blog called “Beneath the Petals,” and it tells my story from day one. It has allowed me to open up, heal and deal with those feelings. I had over 15,000 views of my blog, and I ended up healing other people with it.

How did cancer treatment affect you?

I had doctor’s appointments once a week, and that was my only outing, so I would dress up. When you go through a surgery like mine, there are a lot of tubes and bandages, and it was difficult to find something to wear. That’s where the occupational therapist in me met the fashion designer, and I designed clothes to work around that. That would take my mind off of everything, and the focus would be on the clothes.

Where do you draw inspiration for your clothes?

Traveling and people watching inspire me. I think of wanting to look good and feel good but still be comfortable in the clothes. I enjoy taking trips outside of the country. Anytime I need inspiration, I just go somewhere new!

What habits help you be your best self?

I am a big stickler for eating healthy and exercising. When you’re taking care of your body and exercising, you feel healthier, and I feel like that makes you healthier.