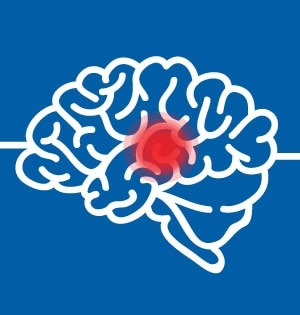 Southerners live in what the Centers for Disease Control calls the “Stroke Belt,” an area made up of people who are both more likely to suffer a stroke and more likely to die from one.

The one thing doctors who treat stroke victims wish you knew? How much control you have over that risk. As part of National Stroke Awareness Month, we’re providing information necessary to help you recognize how to lower your risk of having a stroke.

An average of about 795,000 people per year have a stroke. For more than 140,000 of them—roughly the population of the city of Savannah—their stroke is fatal. Yet most of us have only a superficial understanding of what a stroke looks like, how to prevent it and what the outcomes can be.

“Eighty percent of strokes are preventable,” says Dr. Aaron Anderson, a vascular neurologist at the Marcus Stroke & Neuroscience Center at Grady Memorial Hospital. “There are some risk factors that you can’t change, like age, but there are plenty that we can treat and control.”

“People feel like they’re powerless when it comes to stroke prevention, that they’re at the mercy of their genetics,” says Dr. Lisa Billars, chief of the departments of neurology and sleep medicine at Kaiser Permanente Georgia. “But these modifiable risk factors matter a great deal.”

A recent REGARDS (Reasons for Geographical and Racial Differences in Stroke) Project study, sponsored by the National Institutes of Health (NIH), showed that a Southern-style diet, characterized by fried foods and high in both saturated fat and added sugar, significantly increased the risk of acute coronary heart disease (and therefore stroke) more than any other diet pattern the researchers evaluated—including one full of pizza and takeout. (Note: We are not advocating switching to pizza and takeout.) 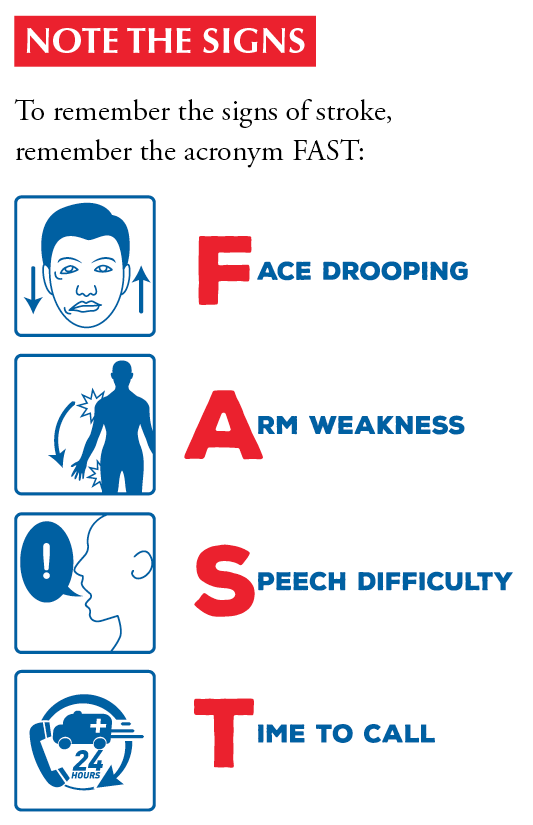 If one side of a person’s face droops, one of their arms can’t raise as high as the other or their speech is slurred or confusing, the key is the “T”—time. Clinicians say, “Time is brain,” meaning that the longer it takes to get treatment for a stroke, the more nervous tissue is lost. It’s estimated that, during a stroke, each minute costs a patient 1.9 million neurons. The difference between arriving at the hospital in 45 minutes versus 65 can be critical.

The growing awareness of the importance of time to treatment, along with treatment advances, is changing outcomes for stroke survivors. A good outcome for a person who has suffered a stroke is a mild disability (the patient can still walk and perform daily living activities independently). An excellent outcome means full function returns to the patient, along with some side effects, such as headaches.

The American Heart and Stroke Association defines two distinct types of stroke—ischemic and hemorrhagic. An ischemic stroke results from a clot that obstructs blood flow to the brain. The hemorrhagic stroke occurs due to the rupture of a blood vessel leading to the brain.

For an ischemic stroke, the treatment champion is tissue plasminogen activator (tPA), a blood-clot busting medicine that allows blood to flow to the brain where it’s needed. However, the catch is that it can only be administered up to three hours (in some cases, four and a half hours) after a stroke.

The most exciting ischemic treatment advancement, according to Dr. Fadi Nahab, medical director for the Stroke Program at Emory University Hospital and Emory University Hospital Midtown, is an endovascular procedure called a mechanical thrombectomy. A physician threads a device called a stent retriever through an artery in the groin to get to the blocked artery in the brain to grab the blood clot. 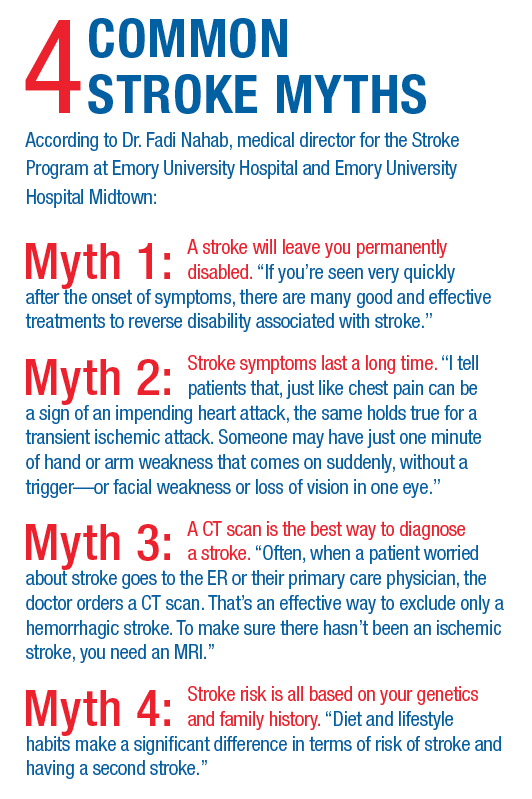 “We’ve learned through multiple studies that getting to ischemic stroke patients as quickly as possible results in significantly less disability from that stroke than with just clot-busting medicine alone.” Dr. Nahab adds, “This is one of the most substantial improvements in any procedure in any specialty in medicine.”

Dr. Nahab also feels encouraged by new medications showing promise in early studies as well as a new procedure for unruptured brain aneurysms that can prevent hemorrhagic stroke. What doctors really want to share with the public is that researchers are learning new things all the time, and ongoing studies reveal insights into innovations that can be put into place immediately.

Recent studies on stroke recovery found, for example, that patients with weakness resulting from a stroke on one side of their body can regain more mobility if their full-functioning arm is constrained and they are forced to use their disabled arm.

Physicians have also taken a more aggressive stance on early mobilization after research showed better physical function and a better rate of return to walking if patients move around in the first 24 to 48 hours after a stroke. “We used to think, ‘Let them rest, they just had a stroke.’ But now we know it’s vitally important to get them moving unless there’s a compelling reason they shouldn’t be,” says Dr. Billars. She points out that this is a tactic that can be used even in small communities that don’t have access to a high-tech stroke center.

The role of family and friends in stroke recovery is vital, not only to share the psychological burden or practical tasks in caring for a patient, but also to provide encouragement through the physical-therapy process. It can be difficult for patients to continue pushing themselves to move when their body isn’t cooperating like it did before a stroke. “Stroke recovery doesn’t have to stop six months or a year after a stroke,” says Dr. Anderson. “It’s not static. And it doesn’t happen without support.”