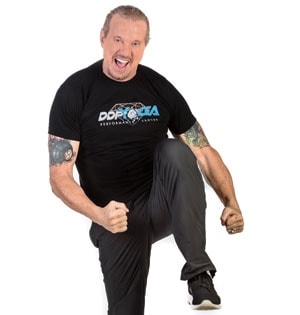 Diamond Dallas Page (a.k.a. DDP) fast-tracked his professional wrestling career at warp speed. He may have arrived a bit later to the party than most, starting at age 35, but he made up for the lost time, reaching the top tier of the industry within a few short years. In 1998, that success threatened to come crashing down when, at age 42, his injuries caught up to him. He had struggled with shoulder and knee injuries, and then, a final blow hit when he ruptured his L4 and L5 discs during stunt sequences for a film.

Hoping to avoid surgery, DDP searched for exercises to help him regain his strength and found nothing. “There was nothing out there. Nothing!” he said. His former-wife (and still business partner), Kimberly, urged him to try yoga, but he resisted with full force. “I said that I’d never be caught dead doing yoga,” DDP confesses. Nope. No way. That wasn’t for him. He couldn’t get past the yoga stereotypes, claiming all of it was too “out there” to take seriously as a hard-core athlete. For this tough guy accustomed to heavy-duty weight training and regular body slams, yoga seemed like nothing but “spiritual mumbo-jumbo,” and he continued to ignore the suggestions.

But as doctors advised retirement, proclaiming his career to be over, he softened his resolve. Page was desperate to make a recovery and ready to try anything to get back in the ring—anything—even yoga.

Reluctantly, he added yoga to his physical rehab routine. At first, he felt frustrated. He didn’t know how to breathe correctly through the moves and couldn’t find the right modifications to fully accommodate his injuries. He got mad. He refused to quit. He had a mission and he was, quite frankly, out of other options.

Within three short weeks, he started to notice a significant difference. This “spiritual mumbo jumbo” was working for both his body and his mind. Yet, he needed to amp it all up to regain strength. He played with the routines and movements, adjusting motions to suit him. He incorporated some of the techniques learned in his physical therapy. Gradually, he tacked on old-school calisthenics and then layered those with dynamic resistance. It took him awhile and he discovered for himself why yoga IS called a “practice.” It takes, well, practice.

Page learned to relinquish a bit of control, to let things flow, to listen to his body and allow it to teach him. Soon he realized how much he could potentially teach others. If a yoga-based program could change him, when he had been so openly stubborn about it, then perhaps he could “change” existing yoga programs to bring these benefits to those who may also have previously rolled their eyes. 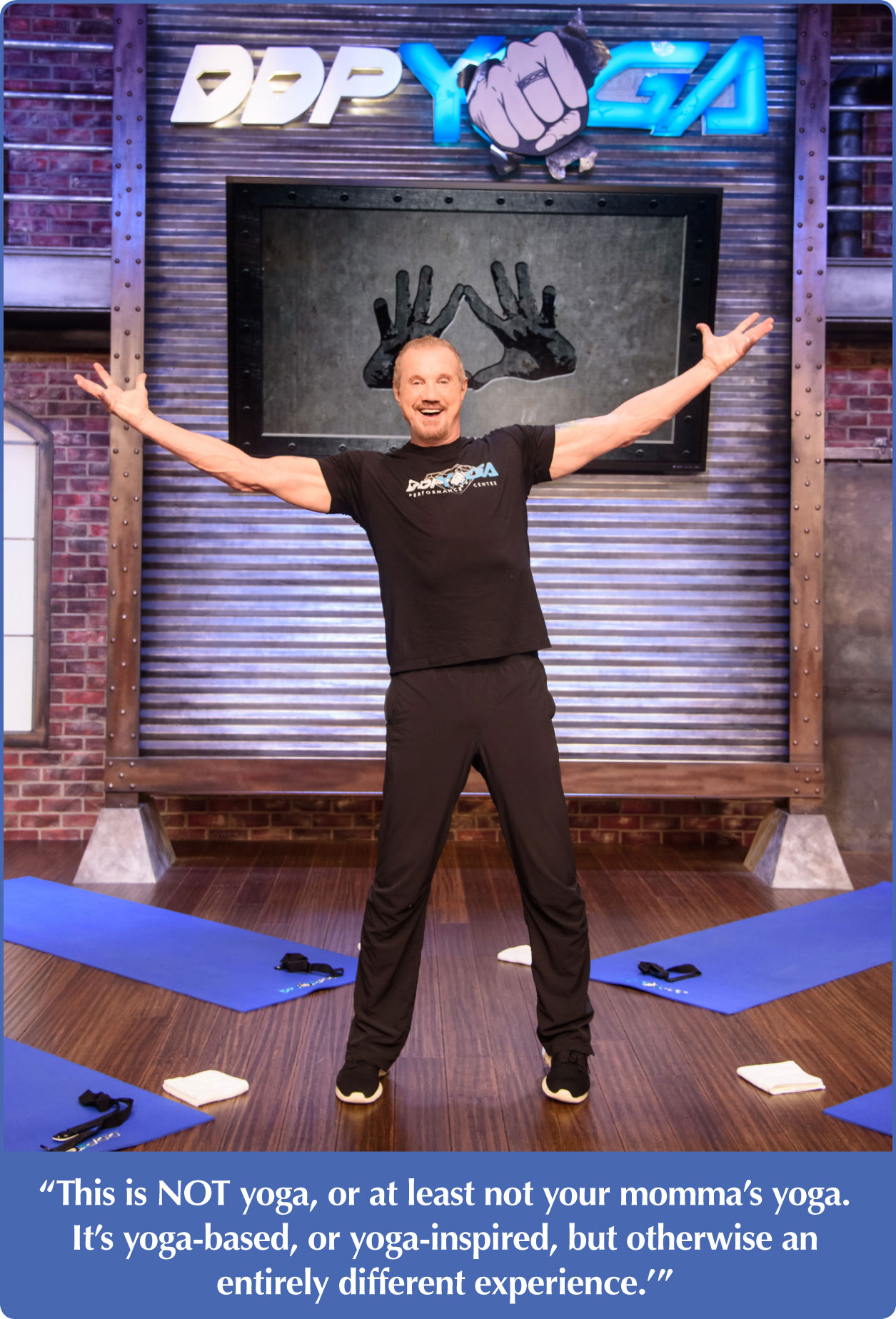 “I see yoga like sushi. Years ago, I’d have never eaten sushi, and now I crave it.” Page clarified, “I didn’t start this for yogis, not at all, [they have] hundreds of different kinds of yoga.” He wanted nothing of the traditional yoga culture that had turned him off, and he longed to inspire real people who thought they couldn’t relate to some of the traditional yoga premises. He set out to develop a yoga practice for regular guys.

And those regular guys were exactly who filled his first classes.

Page chuckles as he recalls the way he opened those sessions. He’d fold his hands in prayer and acknowledge that most of the students expected yoga to be about “namaste.” But then, “I’d raise my hands up into my diamond-cutter sign and announce that mine is about T&A — Tone & Attitude. Look, 90 percent of the workout is between your ears, [in] your inner voice, the story we tell ourselves. Everyone is ready to listen to the negative [voice in their head]. So many people start out with an attitude that they will just ‘try it.’ The spiritual end of my yoga practice is the power of ‘I can. I can get there. I’m working on it.'”

DDP Yoga is NOT Yoga

Page quickly asserted that, despite the DDP YOGA title, he does not refer to his workouts as yoga. “This is NOT yoga, or at least not your momma’s yoga. It’s yoga-based, or yoga-inspired, but otherwise an entirely different experience.” Page revealed that the resistance element of his workout caused a cardio advantage that surprised him. As he first developed moves that worked for his rehabilitation, he noticed that even minimal, low-impact resistance raised the heart rate. For example, that signature “diamond-cutter” hand symbol of his: the pressure of pushing fingers together and extending overhead registered a moderate spike on a heart-rate monitor. “We’re flexing and engaging muscle. Every time you do that, you jack up your heart rate,” Page explained.

The transformative DDP YOGA workout has garnered national attention. The story of disabled Gulf War veteran Arthur, went viral as he documented his own healing journey while following the program, and YouTube teems with similarly powerful video diaries of hope. In fact the interest in the workouts and testimonials led to the next phase of Page’s mission — the DDP YOGA Performance Center. 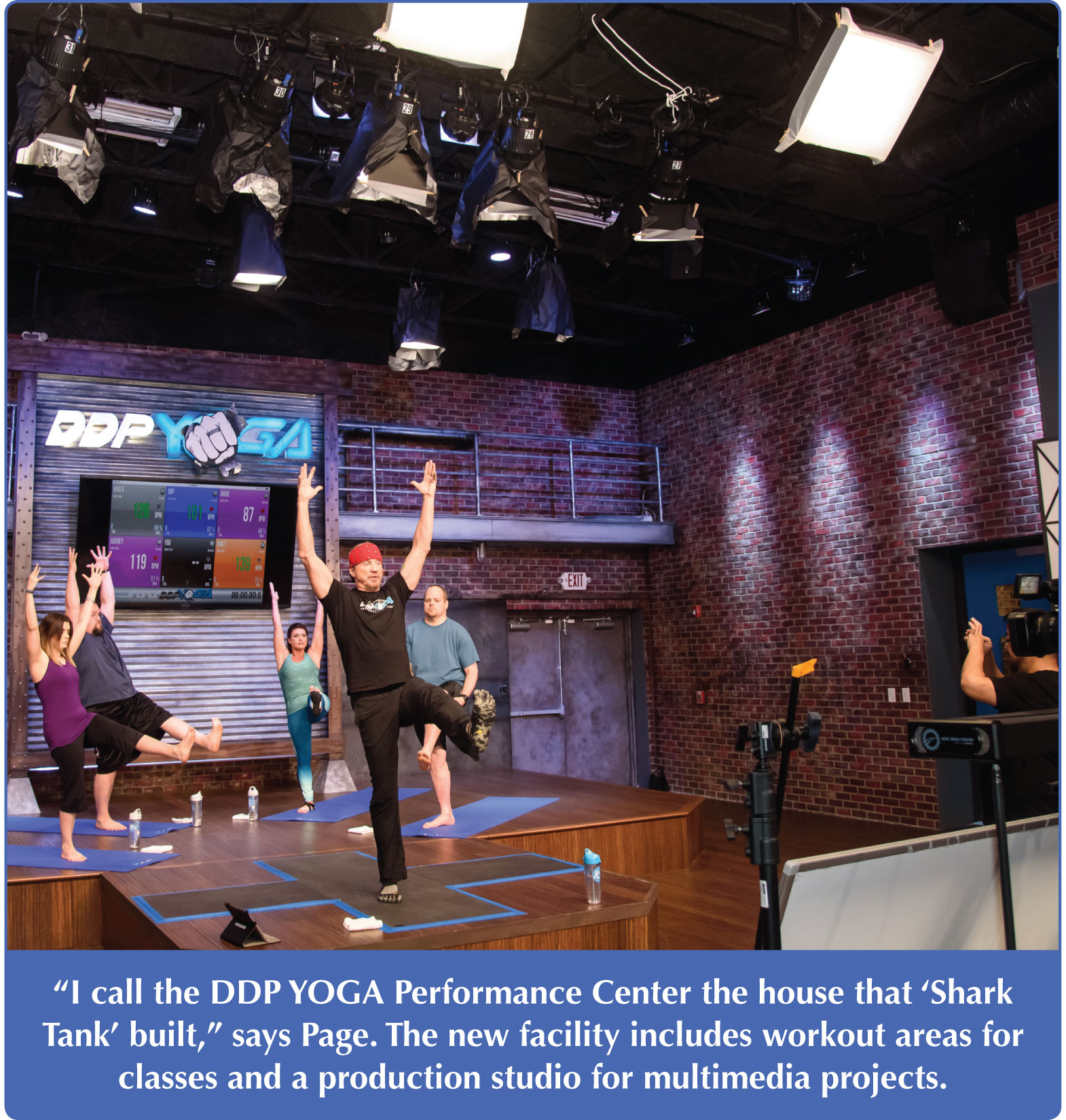 For years, Page has recorded videos of various routines and posted them online. He realized that he needed a designated place to film those videos in order to produce high-quality programming for distribution. As he considered all the options, he knew he didn’t want to be limited to producing only DVDs. He wanted to keep everything in-house — the videos, the classes, the production — and explore new possibilities for the brand. He needed to raise capital to do that, so the former champion wrestler went on the TV show “Shark Tank.” That’s right. He went on “Shark Tank,” promoted his plans and was completely denied.

That appearance, however, rallied enough interest and sales to ultimately fund construction of the multi-use facility he’d planned. “I call the DDP YOGA Performance Center the house that ‘Shark Tank’ built,” says Page. The Smyrna/Vinings workout and production studio once again shatters expectations with its combination of boutique-style rustic and urban-industrial design and innovative use of technology. Heart monitors on the classroom walls keep students informed of their bodies’ responses. A variety of spaces, including the classroom area, double as studio sets for video production; there’s a full kitchen set-up for DDP’s healthy-cooking video segments and a green screen for movie-style special effects fun. His technology team headquarters there and is currently developing the DDPYogaNow app, which integrates all aspects of the programming into a convenient, entertaining format. The team recently segued into documentary film production with the highly-acclaimed and riveting true story of “The Resurrection of Jake the Snake,” recently-released and garnering incredible buzz.

When evaluating the twists and turns of this career path, no one registers greater amazement than Page himself. He’s overwhelmed by the direction the brand has taken, yet maintains that his overall goal is to continue serving those people dedicating their health to this program. Page humbly declares, “There’s no fad to yoga. This is not a new thing. The practice is only as good as the teacher and the commitment.” His commitment inspires a motivation that’s revolutionizing fitness for countless grateful enthusiasts. Namaste, DDP, namaste.