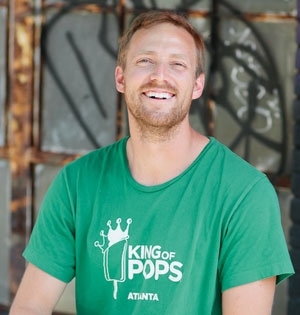 Refreshing. Flavorful. An Atlanta summer staple. These might be the descriptions that come to mind when someone mentions “King of Pops,” but when Best Self Atlanta sat down with Steven Carse, the company’s creator, we discovered there’s even more to the product than that. In addition to being tasty treats, King of Pops products are local, sustainable and help reduce food waste.

Carse says his inspiration struck when he visited his older brother, an anthropologist doing field work in Latin America. “The model there is pretty ingenious,” he says. Farmers take their produce to market, but not all of it sells. Instead of letting the food (and their potential earnings) go to waste, the farmers make the leftover fruit into popsicles called paletas. “That was something that just really made a lot of sense to me,” Carse explains, citing that not only does the practice extend the life of the food, but it also creates another valuable product from a local source. But Carse had a typical 9 to 5 job at AIG, so it seemed unlikely that he would be able to bring the paletas concept to America.

Sometimes the push you need comes in a pink package. Well, a pink slip, to be exact. In 2009, Carse was laid off. He says at that point, “I didn’t really feel like I had anything to lose.” Without a spouse or kids to consider, he dove head first into this idea that had been on his mental back burner since that family trip. “That winter, I made a ton of pops. I don’t even really remember [the flavors]. I was trying every single thing I could consider and forcing it down people’s throats,” he jokes.
Beyond the “making pops” part of the process, though, he didn’t have a grand plan. “I envisioned sitting there every day, just at North Highland and North Avenue, having a small following and someone eventually to help me in the kitchen.” But the hope of laid back days was soon eclipsed by long, busy hours, thanks to overwhelming consumer demand. “It kind of took off fast,” Carse admits modestly.

Soon, he asked his brother to come on board. Since his brother was leaving a lucrative law career, they made it a point to crunch the numbers and confirm that this popular idea could really be a successful business. Having a family member for a partner, Carse says, “has only been good. We have very complementary skill sets. We can be honest with each other and have each other’s best interests in mind.” Soon it was in the whole family’s best interest to be a part of the business: now Carse’s mother and father are on board. “It is kind of a family affair,” Carse says. “We haven’t had any bad experiences yet.”

These days, Carse’s vision of selling pops from one cart has expanded to six cities outside of Atlanta, with 25 carts in Atlanta alone. Originally, he reveals, “We thought the cart was going to be a very, very small part of our business. We were going to open up a shop.” After putting the product out there, Carse says, he got feedback that encouraged them to change their original idea, leading to the cart-centered King of Pops Atlanta knows and loves today. “I don’t think our business would have been the same if we hadn’t just run with it the way we did.” 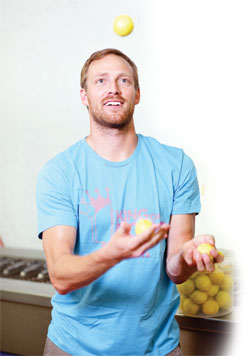 That attitude of adaptation serves Carse well in the off season, too. Naturally, pop sales drop off in the winter months, but instead of slowing down, the company just shifts gears. In recent years, their initiative called Tree Elves has provided a way for the team to stay busy while providing another sustainable service to Atlanta: delivering live, potted Christmas trees to Atlanta homes and then replanting them at the end of the season. This winter, Carse adds, “We’re also toying around with a high-end chocolate bar for the holidays.”

Even as he branches out, Carse also prioritizes staying true to the inspiration: local, sustainable ingredients for his pops. To that end, they recently purchased 68 acres of farmland west of Atlanta, near Douglasville. “The plan is to get more serious about local than we already are. We’ll have bees for honey, and we will be doing our own compost. We’ll be starting with berries, herbs and melons.” They also want to further invest in their relationships with local farmers, emphasizing the method of using pops to preserve ingredients that would otherwise go to waste. “If these guys have extra fruit, we want to become the person that they will call.”

At the end of the day, Carse says, “The more successful we are, the more help we are able to do for the local community.” By purchasing from local farmers, Carse feels he’s introducing every King of Pops customer to the delicious options that can be found right on Atlanta’s doorstep, including the options that will eventually come from King of Pops’ own farm. “One of my biggest hopes is that people can see where the food is from, taste the difference and see what it is all about.” Because whether it’s a wildly successful business or the local food movement itself, a tasty pop may be just the beginning.