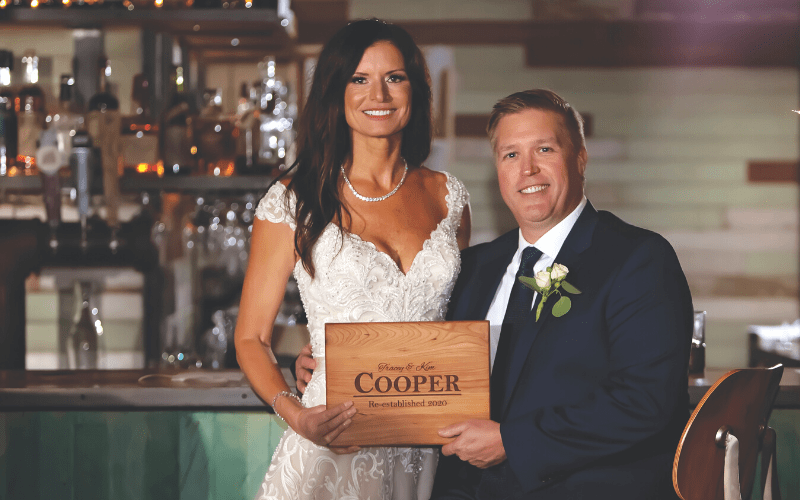 Sometimes the path to deeper connection winds through a period of disconnection. Kim Cooper and her husband, Tracey, discovered this truth when they remarried on Dec. 30, 2020, after having been divorced for the past six years.

“You just don’t think you’ll have a chance to fall in love with someone again, and when it happens, it’s like a miracle,” says Kim, 48. “Things change, you evolve and you change. We had to split to become the people we are now.” The East Cobb couple had been through their share of challenges and trials over the course of their 14-year first marriage. Their daughter Taylor, who is now 20 and is studying to become a nurse, was diagnosed with cancer at the age of four, and Kim had a series of miscarriages in an effort to have their second child, Ella, who eventually arrived in 2008. The couple continued to go through intense difficulties that Kim says revealed that they had not started their marriage off on a solid, deep-rooted foundation, and over the years it began to shake and crumble.

In 2014, a long commute to and from work for Tracey, along with the stark absence of healthy communication and time together, had led to an immense chasm of distance between them, and Kim knew something had to change. “I realized we weren’t happy, and didn’t want my girls to think that was what a happy family and marriage looked like,” she explains. “I’m their role model of what a happy mom and a happy wife should look like.” So, the two moved into separate homes and Kim transitioned into life as a single parent, which she says helped her discover strengths within herself that she hadn’t realized were there.

After a few years, Taylor, who had been 11 at the time of the divorce, started experiencing teenage struggles and Kim and Tracey had to learn to communicate better as co-parents in order to provide her the support and guidance she needed. In the family counseling setting, they reached a deeper level of understanding and connection, and by the fall of 2017, they were dating again.

“We both did work on ourselves while apart, [on] being a better parent and a better person,” Kim says. Tracey took part in a men’s mentoring group and began to show shifts in the ways he communicated with Kim, and things began to change and grow exponentially between the two. “We had a few late-night conversations talking over this stuff, because no one understands your struggles with your kids better than their father,” Kim recalls. “He was listening, and he understood.” And when they met for their first romantic, post-divorce lunch date, “It was like a first date with someone I’d never met, and something just clicked.”

Kim says their daughters were uncertain about the reunion at first, not wanting to go through the pain of separation all over again, but now they are coming into a new level of solidness within their family and a new understanding of what love truly is. And Kim says she’s discovered that with Tracey. “Now I know 100 percent that there is pure, unconditional love there, because he’s seen everything—the good, the bad, the ugly and everything in between,” she says. “It’s not easy, and it’s definitely a choice—you have to choose every day to love that person unconditionally. If you’re going to work together, you have to choose love.”

Kim’s Advice for a Lasting Relationship
• The past is the past for a reason. Learn from it, move on and leave it there because it no longer serves the direction you are going.
• Build your relationship on a rock-solid foundation and remember the importance of communication and empathy.
• Never stop dating your spouse! It’s essential to take the time for each other and intentionally connect on a weekly basis.