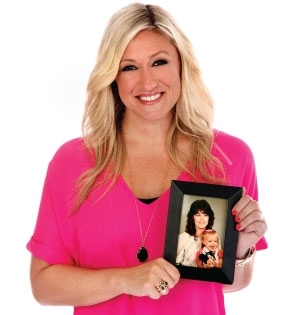 At first glance, Kiera Palmer seems like an unlikely breast cancer activist. She spreads awareness and raises research funds for this disease that traditionally affects women twice her age. She works long hours in the insurance industry, which doesn’t seem like it would allow much spare time for fundraising. She hasn’t had the disease herself. And yet, an activist she is. “I did the Susan G. Komen 3-Day Walk four times,” she remembers. “I would have a fundraiser every fall for people to donate to the walk.” In 2013, she took her passion to the next level by spearheading the launch of The Pink Agenda in Atlanta, a 501c3 nonprofit dedicated to breast cancer awareness and fundraising. “It’s like a second full-time job, for sure,” she says with a smile. But, she points out, “I’m so passionate about what we’re doing that it’s not work.”

Where does that passion come from? Like many things in life, it started with her mother. When Palmer was just 16 years old, her mother passed away from breast cancer. Cindi Ranke was only 40 at the time, which spurs her daughter’s activism today: she works to include young women in the awareness of this disease, knowing that they may be at risk just as early in life as her own mother was.

In the summer of 2013, Palmer was poised to begin her annual fundraising efforts for breast cancer, with October only a few months away. For years, she had been active in awareness walks and held annual fundraising events on her own, but now she was ready to step it up even more. In researching organizations she could get involved with, Palmer came across The Pink Agenda, a nonprofit in New York City affiliated with the Breast Cancer Research Foundation (BCRF). “I had never heard about The Pink Agenda, which surprised me, because I try to stay very involved with what’s going on. So I read up about it and it kind of hit me – that was exactly what I was trying to do.” 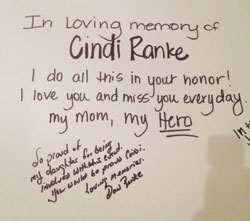 Their mutual goal was, and still is, to include the younger generation in breast cancer awareness. No dull sit-down dinners for this organization: they cater to a 25- to 40-year-old crowd by hosting events with open bars and DJs. At age 30 herself, and ready to get more involved, Palmer didn’t hesitate to email The Pink Agenda’s president, founder and treasurer – anyone she could find on their contact list. She asked them if they wanted to branch out of New York and bring their efforts into Atlanta, and the answer was a resounding “yes.” Palmer was quickly on a plane headed to the BCRF office in New York City.

After a meeting with The Pink Agenda’s New York team and Myra Biblowit, president of BCRF, Palmer returned to Atlanta empowered to launch the organization’s first satellite chapter. Atlanta Pink Agenda’s first big event, Toast to a Cure, happened “basically two months later,” Palmer remembers. “It was pretty tough to get the word out and get sponsors on such short notice,” but despite those challenges, she managed to pull it off with the support of her company, clients and Atlanta network. The event, which included drinks, music and a silent auction, brought in an impressive $56,000.

Staying true to The Pink Agenda’s desire to cater to young breast cancer supporters and victims, a portion of these funds were awarded to the Dana-Farber Cancer Institute’s Program for Young Women with Breast Cancer in the form of a direct care grant. Increasingly, those young women seem to be all around us. Palmer says, “We have two women on our board of directors who are 31 and 29 who are both breast cancer survivors. We actually have a young woman coming to speak at [Toast to a Cure 2014] who is 30, and she is a three-time breast cancer survivor.” And of course, Palmer’s mother is never far from her mind – Ranke, passed away from the disease at just 40 years old. “We want people to know that it’s not just your grandmother,” Palmer says. “This is affecting people you are hanging out with every single day.” And unfortunately, according to a study of more than 200,000 women in the SEER database, under-40 women with breast cancer are 39 percent more likely to die from it than their over-40 counterparts. 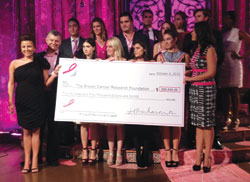 And The Pink Agenda’s answer to that frightening fact is, as they say, to “raise money, raise awareness and raise hell.” Bringing this feisty spirit to their important work helps pull in the younger crowd at events like Pink Your Drink, which they held in May at a local bar, or the annual Toast to a Cure, which will be held for the second year on October 16. “If you’re going out and you’re going to have a good time, come have a good time for something good,” Palmer says. To that end, this year’s Toast to a Cure includes a DJ, an open bar, a silent auction and heavy hors d’oeuvres. And true to The Pink Agenda’s mission and Palmer’s enthusiastic, dedicated spirit, it includes the promise of a meaningful good time.

The Pink Agenda awards a check to the Breast Cancer Research Foundation from last year’s funds.