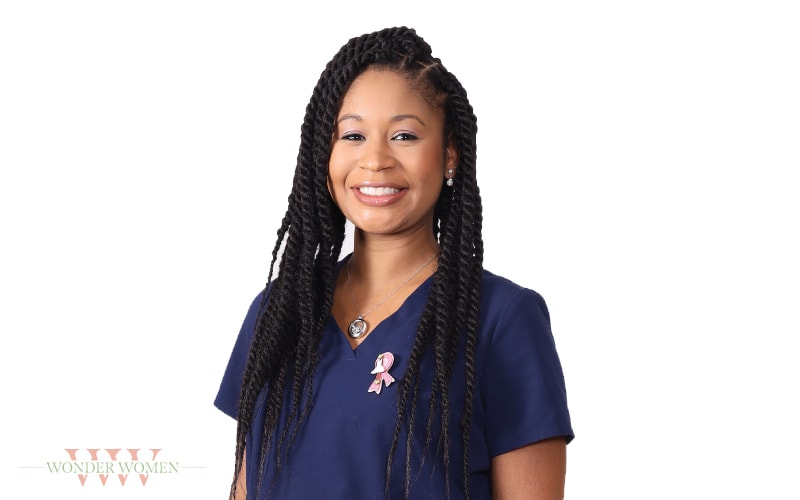 Janae Finley, 34, says that her ordeal with breast cancer was both a curse and a blessing. “I was referred to TurningPoint to aid in my recovery following surgery and radiation. I came to TurningPoint and never left,” she says. “Approximately one month after completing my therapy I began working at TurningPoint as a physical therapist. It was one of the best decisions I have ever made in my life.”

In March, TurningPoint made the decision to switch to primarily remote services for the health of their staff and patients. The transition has been tough for Janae. “I truly believe in the power of healing touch,” she explains. But despite the challenges of going virtual, she says she has definitely seen some good things come from it. “Because we can reach more people, we no longer have a limit on the number of participants who can attend our events,” Janae says, adding that she has been able to assist patients as far as Macon and Rome.

Though she misses the face-to-face interaction, Janae says that by working hard she’s still able to establish the strong connections of support her patients need during these even more difficult times. “One of my most heartwarming moments during COVID was with a patient who I had previously seen in the clinic,” tells Janae, who reached out to check on them after she received her third surgery. “She proceeded to tell me about her recovery and the last thing she said in her email was, ‘Thanks for being the best PT and friend ever!!’ In all of her time on her long breast cancer journey, she had never had anyone just check in with her other than a post-op visit with a doctor. She was so appreciative, and when I did finally see her for a telehealth session three weeks after her surgery, she just wanted to thank me so much for being there for her and hanging in there with her on her long journey. She told me that she would not have even gone through with her last surgery if I didn’t encourage her to take care of herself. Speaking with her that day made me realize that even through an email or a telehealth appointment I can still make a difference in people’s lives.”

Once things are safer, Janae plans to take her 4-year-old daughter to Disney World.