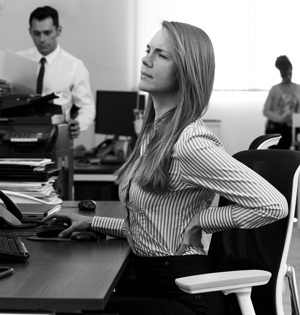 In the 1940s and ’50s, scientists raised the alarm that cigarette smoking contributed to disease. And yet it wasn’t until 1964, when the Surgeon General released a report saying definitively that smoking caused lung cancer, that the public began to change behavior.

More than 50 years later, we’re still fighting the public health battle against smoking. But another behavior has been hailed as “the new smoking,” a health menace that requires intervention: sitting.

Evidence is mounting that too much time on your tush leads to chronic health problems and an overall higher risk of mortality. Worse, the length of time we spend sitting doesn’t seem to be offset by how much exercise we get.

So, how much damage are we doing while we sit idle? And how much of the hype is just that—hype?

Sitting is a behavior that, barring disability, we all do. And it’s one that’s easy to ignore because it’s such a big part of our daily life. We’re commuting to work or school, we’re seated at a desk behind a computer or around a conference table. We spend our leisure time watching TV or reclined at a movie theatre or lingering at a restaurant table.

“With the Industrial Revolution, we started moving away from traditional, ambulatory living into what some have called a ‘chair-sentenced’ life,” says Randy Martin, MD, FACC, FESC, FASE, emeritus professor of cardiology at Emory University Medical School and principal advisor of the Marcus Heart Valve Center. “Employers believed that the fewer minutes moved during the day, the more productive workers would become.”

On average, more than half of our waking life is spent sitting down. While there are plenty of public health recommendations for exercise (The World Health Organization [WHO] recommends 150 minutes of moderately intense activity per week, or 75 minutes of vigorous exercise), there’s no guideline for the length of time you should (or shouldn’t) be sitting.

Surely evolution didn’t give us two legs and the ability to walk upright because we’re designed to recline.

A Body at Rest Stays at Rest

Many studies agree. A meta-analysis published in January 2015 in the Annals of Internal Medicine made a splash in the medical and academic worlds. Researchers reviewed 47 studies assessing inactivity in adults. They found that prolonged sedentary time was associated with a greater risk of:

While high levels of physical activity decreased some of the ill health effects of time spent sitting, it didn’t erase the risk. Sitting for eight hours a day at work wasn’t cancelled out by a 60-minute workout, no matter how intense.

The individual studies included in the review had all pointed out serious health risks related to prolonged sedentary behavior, but taken together, the evidence is damning. The limitation of an epidemiological approach, however, is that it can’t determine that sitting caused these diseases and conditions—only that it’s associated with them.

A big question is: What are the bodily processes that happen (or don’t happen) while you’re sitting that make you more susceptible to falling apart?

What’s a Body to Do?

In the hour after a big meal, the body experiences a spike in blood glucose and insulin response. Over time, those spikes lead to fatigue of the insulin-secretion system, which in turn leads to Type 2 diabetes. That is, if you’re sitting. But if you walk after a meal, or do even 10 minutes of moderate activity, those spikes aren’t so severe.

Or let’s take a look at a protein called lipoprotein lipase (LPL). LPL helps determine whether the calories you consume should be used as energy by your muscles or turned into fat. High levels of LPL in the blood send the calories to muscles to do work. Low levels of LPL signal the body to store it. Research shows that sitting for long periods of time decreases your LPL levels by as much as 90 percent. If you’ve spent most of your day sitting, even if you go to the gym straight after work, the damage has been done. However, studies also show that moving on an hourly basis throughout the day keeps LPL levels high.

When we’re moving, the cellular processes that keep us healthy are also trucking along. When we stop, so do they.

What’s the answer to the optimal workplace? Do we all need a standing desk (or a bicycle desk or a treadmill desk or maybe a hamster wheel)?

According to Dr. Alan Hedge, a professor of ergonomics at Cornell University, concern over how much time we spend sitting versus standing at work is nothing new — although a hundred years ago, the worry was over too much standing and the dangers of being on your feet for hours: varicose veins, fatigue and strain on the circulatory system.

So neither sitting nor standing all day is the optimal pattern of working, despite what your newly-converted-to-standing-desk co-worker may tell you. The ideal, says Hedge, is a combination of sitting, standing and moving around. To be precise:

That way, you’re letting different groups of muscles rest at different times by building a variety of movement into your day.

“When you sit longer than an hour, there are measurable biochemical reactions that happen in the body. Exercise doesn’t reverse those changes—only frequent movement does that,” Hedge says.

As for treadmill desks, research shows that performance of certain tasks, like typing, deteriorates while walking; other tasks, like reading a document or making a phone call, are unaffected. But the more cost-effective (free, in fact!) version of a treadmill desk is to get up and walk around while you’re on a call.

Better health at work doesn’t require new equipment, and neither does a resolution to standing from 9 to 5 or a brutal workout after hours. The answer may simply be making more transitions from seated to standing. More research is needed to investigate the underlying causes of the links between sitting and disease, but in the meantime, remember the 20/8/2 rule: 20 minutes sitting, eight minutes standing, two minutes walking around. Don’t let your sweaty gym time go to waste.