Midlife dating is a testament to love’s battle scars—divorce, children, time-intensive careers. As we age and our life experiences increase, so too do our hearts wrack up both wonderful and not-so-wonderful moments of love. But that’s the great thing about hearts—no matter the age, the capacity to love and find love always exists.
The stories of these local couples will entertain and inspire you, reminding us all that love is always waiting to be discovered. 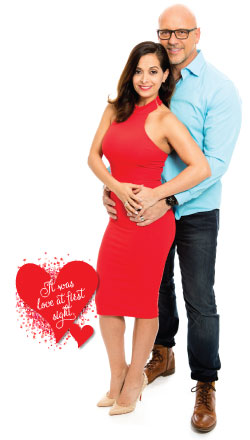 Prior to meeting in 2007, Maria and Keith were each newly divorced with five young children among the two of them. Frustrated with the bar-hopping dating scene, they each sought out nontraditional methods of meeting that special someone, and eventually landed on matchmaking service Single Atlanta. Keith became known as the service’s pickiest client and Maria participated on a whim with a free trial. The stars eventually aligned, somewhat, as Maria became Keith’s fourth match and Keith became Maria’s second match. Once the two waded through earlier matches, they met each other and it was love at first sight. Literally.
“Single Atlanta offered its clients the option to see a picture of their potential dates; Keith and I both opted not to see pictures,” says Maria. “We were perfectly comfortable, for the most part, being matched based on non-aesthetic qualities of a potential match. We both trusted the matchmaking counselors and the process.”
They both bonded over the love for their children and God, as well as their desire to find soul mates. About two years after their first date, Keith and Maria married in front of their newly blended family, and their marriage has withstood the test of time over nearly 10 years.

“We both chose to be very intentional about midlife dating; we sought a relationship that would last forever,” says Maria. “As a thirtysomething woman, I found it difficult to find a potential partner that didn’t mind when I talked about my kids. I struggled with putting myself out there, opening up to someone, and I feared rejection.”
Not trusting her own dating instincts is what pushed Maria toward a matchmaking service, like Single Atlanta. Her journey toward true love was guided by a professional agency that could help her fulfill her dreams and fill the voids left in her heart by past relationships. “[Single Atlanta] opened our minds to try new things and meet new people,”she continues. “They offered a sense of security while also offering a sense of exploration. Midlife dating can be fun and exciting!” 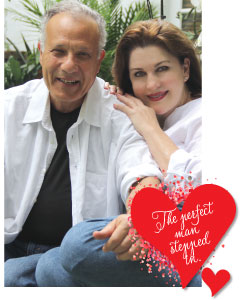 Jacklyn Ghali’s love life seems to be straight out of a romance novel—a hair color specialist, divorced for 30 years, catches the eye of a glamorous man with a sexy foreign accent. The two fall in love and eventually get married in his native Egypt, taking a spectacular cruise down the Nile River, where both their families meet in Alexandria. The couple sails off into the sunset, back to the United States and eventually celebrates their nuptials with their friends and families back in Atlanta.

So there may not be any dastardly pirate or a menacing vampire, but Adam and Jacklyn Ghali’s love story is primed for novelization. The two first met on Match.com after this “happily divorced” woman decided it was time to get back on the dating train. Instead of filling out the questionnaire with her standard responses, she decided to think outside the box and target a relationship that didn’t fit the usual men she looked for. She opened her heart to love and the perfect man stepped in.
“The first time I saw him at Villa Christina, he came running down the stairs and I kept thinking, ‘This person enters a room like a member of the Rat Pack!'” Jacklyn says. “I was so busy looking at his feet and legs, it took me a second to realize he was headed straight toward me. When he got close to me, he said my name in a beautiful accent, put his hands on my face and kissed me on my cheek three times. I thought, ‘Oh my God, this will be the one!'”

The eye-catching moment led her to a flourishing, healthy relationship, where each partner respects and appreciates each other. He loves to cook elaborate dishes and she brings home lovely flowers, as they ignore generic gender roles and celebrate his and her strengths and wants. Though at times, Jacklyn loves the “old-fashioned rules” of courting, where the man holds the door, helps put on her coat and lovingly pursues her. “We listen to what each other has to say,” she says.
When it comes to dating, she credits her realization looking beyond what she had always sought in a potential partner. “My midlife dating advice to people, whether male or female, is not necessarily opposites attract, but maybe try a different path.” 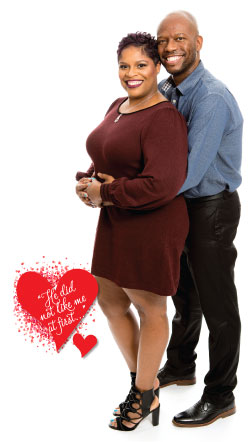 Sometimes you actively seek out love and sometimes it just pops up out of nowhere, even at the watercooler. That’s what happened for Adrienne and Floyd Allen—their work lives coalesced into their love lives, eventually leading to a wedding in May 2017.
Adrienne, originally from Baltimore, Maryland, and a mother of three from her first marriage, admits it wasn’t love at first sight, or rather sound, when she started at her job in 2016, where Floyd had already been employed for eight years.

“He did not like me at first and told his mom that the ‘loud girl’ at work wouldn’t leave him alone. He had been single for eight years and wasn’t interested in a relationship at all,” she says. But she was persistent about going out with him. The two talked more at work, grabbed lunch and, over time, started conversing and socializing away from the office. When he found out that his mom, who is also originally from Baltimore, shares the same birthdate as Adrienne, it became a bonding moment the two couldn’t ignore.

The couple may be opposites—in fact, one of Adrienne’s favorite things about her husband is his “quiet power”—but it’s this celebration of each other’s differences that she credits to the strength of their relationship. They each enjoy their own space while being together—he has his man cave; she has the living room. But they continue to come together, still dating and eating lunch together.
“Midlife dating requires effort from everyone involved,” Adrienne says. “Go to your favorite spots and pay attention to the people that make your heart smile; those are the people you want to keep around. After 40, people don’t have time for the games—stay in your truth and don’t waiver. The best is yet to come!” 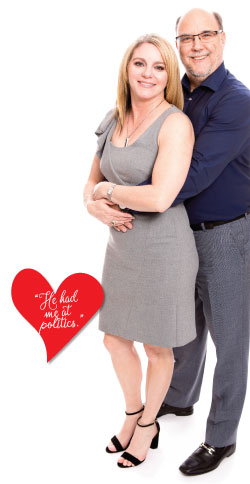 Whereas politics have been known to tear relationships apart (especially in today’s turbulent climate), politics is what brought new couple Tim and Garet together. The two met through Eight at Eight Dinner Club, seated next to each other at one such dinner. When the topic of politics popped up, Garet joked that perhaps the group should avoid such a sensitive subject; Tim interjected with a clever quip about easing into any subject matter. That was it. As Garet puts it, “He had me at politics.”
Garet, divorced for six years, and Tim, divorced for seven years with two children, each turned to Eight at Eight Dinner Club after trying, unsuccessfully, online dating. “I hated online dating because I felt like I had to convince someone that I was a decent person before I could even get a response,” says Tim. “I really liked Eight at Eight because it allows you to meet someone in person and see who they are right up front. While anyone can act differently in person too, it still gives you a much better way to gauge your interest and compatibility.”

Tim and Garet have been together for six months and they both credit timing and communication as the key factors to finding the right partner, and flexibility and fun to keeping the bond strong. Garet also advises that any singles over the age of 40 invest in themselves, learning about what makes you happy and what you want out of life. She also says that every relationship, failed or successful, has something to teach: make strong friendships and if one way of meeting singles isn’t working, keep trying other ways.

Tim agrees with Garet, adding that midlife dating creates a different set of rules. “I am looking for a partner but I’m not willing to be with the wrong person just to avoid being alone,” says Tim. “I think at our age, it’s easier to know what you are looking for in a relationship. When you are in your 20s, there’s this goal of finding someone to marry and start a family. While I don’t need anyone in my life to make it fulfilled, I want someone to share my life with.” 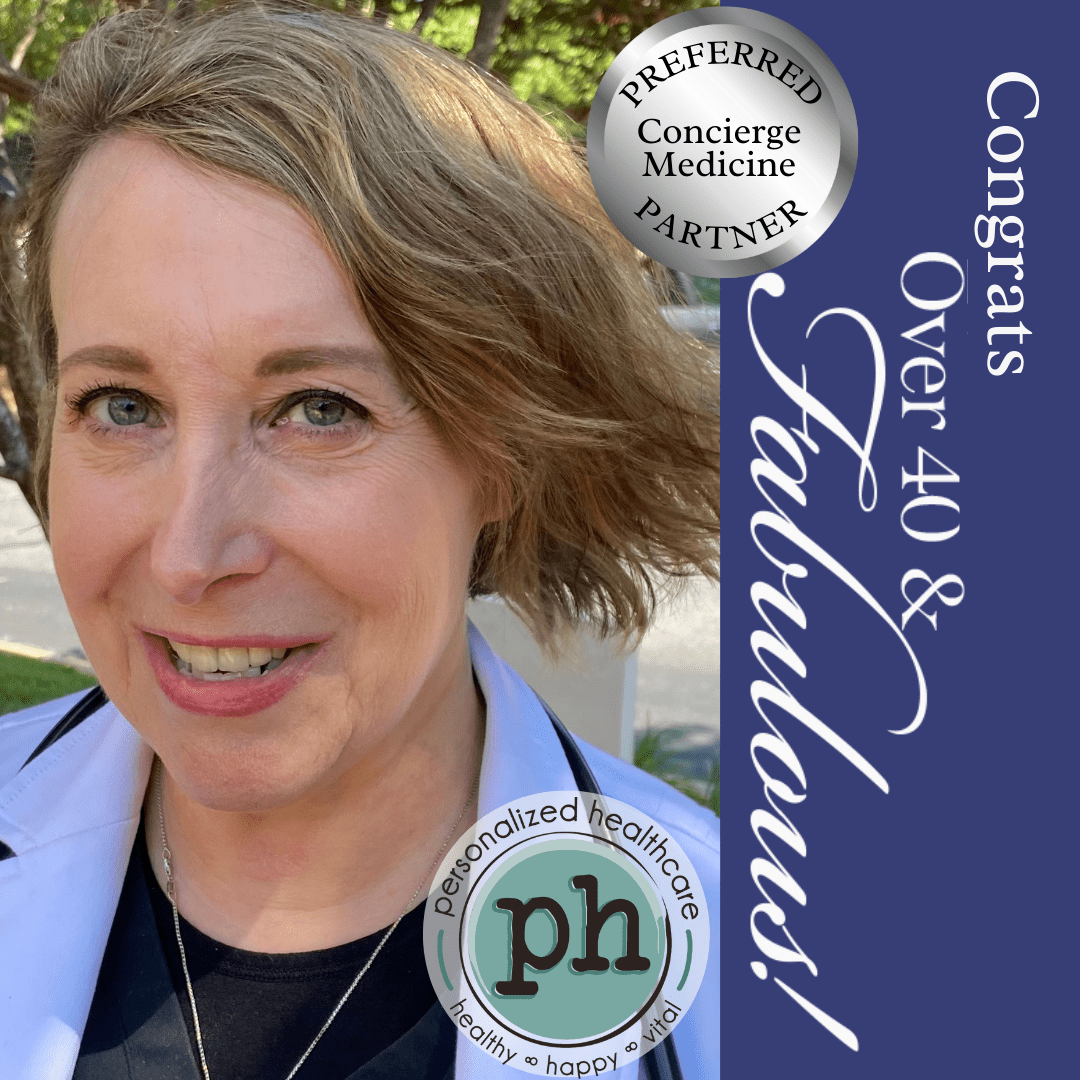