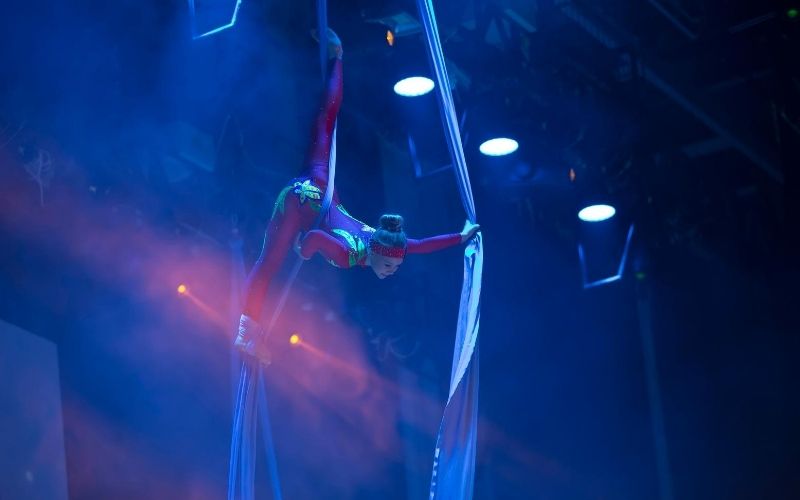 In a magical land somewhere between heaven and earth, you’ll find Corteo by Cirque du Soleil. The Italian word corteo is cortege in English and means funeral procession. Corteo tells the story of Mauro the Dreamer Clown as he pictures his own funeral in a carnival setting. Exciting adventures unfold, both funny and bittersweet, as the clown relives old memories such as a childhood beach day (seen in the Artist Marionette act) and imagines out of this world new adventures like the Helium Dance where he holds the floating Clowness on one hand.

Venturing to places familiar and far out, the 51-person cast presents 16 intense acts from juggling to an aerial dance on swinging chandeliers. In the last act of Mauro’s dream, his friends (10 high-flying men of the Tournik act) send him off on his way with a celebration. Andre Kushneryk, one of the amazing Tournik performers, sat down with us to talk about what you can expect from the arena version of Corteo, why he joined the cast, and his life on the road.

A: One big difference between Corteo and other shows is that all of the cast members are playing humans. We play real people, ourselves, compared to other shows where artists are playing the roles of imagined creatures like bugs or animals. The stage is also different. Reimagined as a circle, the audience is given a view of both sides of the stage, and can see things more from our point of view. The move from big top to arena has led us to add two new acts as well—the suspended pole and the hula-hoop act.

Q: How did you get involved with Cirque du Soleil, and Corteo, specifically?

A: Early in my time performing in the circus I saw Corteo on DVD—I had never seen a show live before I became a cast member—and I wanted to be a part of it. In particular, I remember watching a Tournik actor and I was impressed and inspired by what he was doing. A few years later, I was picked for the same show and ended up playing the same role that had inspired me to send in a tryout video years ago.

Q: What is it like performing in the Tournik act? Is there more pressure or is it exciting to be in the last act?

A: The ending should be strong and powerful so it brings a little more pressure on me because I want people to feel touched by the show. The pressure is manageable for me now because I have been doing it for 13 years but it is always a little bit nerve-wracking. In the end, I do enjoy being a part of the last act.

Q: What do you do to stay in shape for such physically demanding acts?

A: We travel with gym equipment where we can work out daily. We also warm up a lot before each training session and performance. Generally we have sit-ups included, along with several exercises that will vary according to our discipline on the show.

Q: What do you enjoy most about being a member of the Cirque du Soleil team?

A: It is wonderful to be on the road, meeting new people, getting exposed to new things, and trying different foods. I’m a nature lover, and in South America there was plenty for me to see. Places that impressed me the most were the Perito Moreno Glacier in Argentina and the whole Patagonia region where I ate the best lamb ever! Also, Ushuaia, a small town in Argentina, situated at the southernmost point of South America, is named “The End of the World” and has some nice wines. It’s also the motherland of penguins and sea lions.

Another experience that really touched me was the “Inca Trail”— a four-day hike through Peruvian rainforests to the top of Machu Picchu. Plus, I did a road trip through Costa Rica. I love how Costa Ricans take care and protect the environment and promote “Pura Vida” [Pure Life]. It’s a happy and meaningful way of life for all living beings including the planet itself. Discovering this made a big impact on me. Since the beginning of this year, I’ve been traveling in the United States. I really enjoyed New Orleans for the rich jazz culture and Colorado for the magnificent nature views.

Q: What is next for you?

A: I love this show. I hope to keep touring with Cirque du Soleil as long as Corteo is on the road. I do have some hobbies—I like music and play the drums as much as I can. Performing onstage is my main passion though and I hope to do it as much as I can for as long as my body allows me to.

Since its production in 2005, the big top show of Corteo by Cirque du Soleil has drawn 8 million people in 64 cities across 19 countries and four continents. Now reimagined as an arena performance, join in on the fun at the Infinite Energy Center Aug. 29 through Sept. 2. Tickets start at $35 and can be purchased through CirqueduSoleil.com.