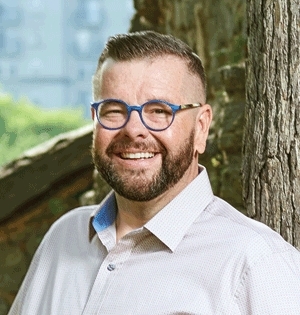 In 2016, interior designer Kerry Howard’s career was on a high note. He had previously restructured his business to allow him to become more involved in the day-to-day aspects of design he loved most. His health however, could not have been worse. At 351 pounds, Howard’s lifelong detrimental eating habits were taking a serious mental, physical and emotional toll on him. And now with a happier work life, he was ready for a personal transformation. Howard realized it was time to tackle the heavy load he’d been carrying his whole life and embarked on a 110-pound weight loss endeavor.

For over a decade, Howard made countless waves in the interior design world.

The growth of his business meant more clients, more employees, more management duties and even less time to try and make conscious lifestyle changes. “The business grew really fast … but self-awareness kicked in and I went back to the grassroots. I scaled down to a small staff. We were all in the same room again, so everyone communicated with each other, and it worked! It helped me focus—not just on my work—but also on changes in myself. And so began my weight loss journey.”

Howard’s personal mission has been one of designing a healthier lifestyle for himself. “I was always overweight, I don’t remember a time I wasn’t,” he says. “I was raised in South Carolina and have an amazing family. But my family feeds you to love you. At breakfast, we’d already be planning what we’d have for lunch. Food became an addiction for me.” Growing up, it was normal for his family to chow down on biscuits made from lard shortening and use pork fat to season just about everything, from beans to creamed corn.

With his 50th birthday drawing near, Howard’s list of health concerns only continued to pile on—back pain, hurting knees, out of control blood pressure, and sleeping with a continuous positive airway pressure (CPAP) machine every night. “I took anxiety pain medication when traveling because I couldn’t stand the thought of making somebody uncomfortable beside me on the plane. I was a big guy!”

With diets and trainers not bringing any great results, Howard realized he needed to do something drastic. He needed to make a big change and make it fast. When medical issues persisted, this time affecting his kidneys, his primary care doctor recommended bariatric surgery. Howard didn’t tell anyone about the surgery, not even his mother, until the night before, for fear of discouragement. “I had made this decision myself and wanted to follow through.”

On October 26, 2016 he made his way to Beltline Bariatric and Surgical Group, LLC for gastric sleeve surgery with Charles Procter Jr., MD, FACS, FASMBS. Within six months, Howard went from a size 54 to a 40. Since having the procedure, he has lost 110 pounds.

“I used to hate going shopping, it was disappointing to not find anything that fit. Now I can go to a normal store to buy normal clothes and look good.” During his weight loss over the last few months, he was thrilled to shop at Target and find pants and shirts that buttoned all the way up for a great fit.

Usually the first to avoid mirrors, Howard’s aha moment finally played out in real life. “In my mind, I didn’t think of myself as overweight until I walked past a mirror and saw the person in that mirror,” he says. “But that day, the person standing in front of me in the mirror was the person that I have always envisioned in my head. It felt so great, I didn’t cry, I was so happy that I started laughing!”

Howard is still losing weight and is ecstatic to have newfound energy and control in his life. “I don’t know if I have ever had energy like I have now. I feel like I have a whole new reason to live.” On a recent weekend spent with family, Howard enjoyed riding bicycles with his nieces. “With being overweight for so long, little things like that made me realize that I missed out on a lot. But I don’t want to miss out on anything else anymore—whether it is family or work or to be able to fly without anxiety.”

Howard’s changes to his personal lifestyle have impacted his professional life positively. “I can get up for work without my body hurting and stay focused during the day.” Being obese, he was consumed by the thought that clients were judging him by his appearance. “But I was my own worst enemy, letting all these things take control of my life. Now, when I walk into a room, I have the confidence and I can own the room.”

As for his newfound happiness with his health, Howard’s mincing no words. “You have to have the will to want to change something in your life. Somebody can listen to me talk all day long about my journey but people have to listen to what their body is telling them to be able to change and become what they want to be in an effort to be their best selves.”