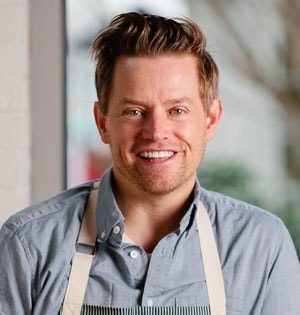 Atlanta Bloggers Weigh in on Fitness and Health Trends for 2014

When you’ve opened several restaurants, braved the reality TV circuit (and survived), written a book and are raising a family, you’re bound to know a thing or two about balancing your time. And if you’re Chef Richard Blais, you take everything in stride. “I’m still trying to figure it out, but I put my family first. That’s the main thing.”

This grounded attitude served Blais well throughout the twists and turns of his career. He graduated from The Culinary Institute of America in New York, but his first job was at McDonald’s. Then he rose from that role to become one of the most recognizable winners of Bravo’s “Top Chef All-Stars” in 2010. His biggest takeaway from being on “Top Chef” is “Improv, in anything, is a great skill to have.”

Blais honed his creative culinary skills next to notable chefs such as Thomas Keller, Grant Achatz, Daniel Boulud and Ferran Adria before making his way to Atlanta in 2000 to run a seafood kitchen. Then in 2004, he opened BLAIS Restaurant. Although this venture was short lived, closing its doors after six months, Blais was undeterred and continued to forge ahead. He went on to work in other restaurants such as One Midtown Kitchen and opened his own company, TrailBlais. This culinary consultant company allowed him to partner with FLIP Burger Boutique, for which he helped create the menu. Then in October 2012, Blais opened The Spence in partnership with Concentrics Hospitality.

Blais’ culinary creativity is evident if you’ve ever dined in one of his Atlanta eateries. As each restaurant evolved, Blais learned what worked and what didn’t. “I continue to learn how difficult they are, what a hard life it is for restaurant workers, and I continue to ask ‘Why do people open restaurants?'” For Blais, the answer evidently seems to be for the love of cooking because he shows no signs of slowing down.

In addition to another restaurant project, Juniper & Ivy, which opened last month in San Diego, Blais took on another TV gig in December 2013. Along with co-host and nutritionist Keri Glassman, Blais now hosts HLN’s Upwave network show, “Cook Your Ass Off.” This show pits chefs against each other in a race against the clock to create dishes that “balance the nutritious with the delicious” for a cash prize of $50,000. “I was stoked to hear of the premise [of the show]. Being that health and wellness have become so important to me, it was a perfect fit,” Blais says. “The message is that you can cook and eat delicious food that is still good for you. I think ‘Cook Your Ass Off’ can help change lives.”

Staying fit and cooking healthy are topics that are now near and dear to Blais, who once weighed in at 225 pounds. When speaking to HLN on this subject, Blais admitted, “I just really lost control of myself because I was tasting food all day long.”

Blais confesses his journey to losing the pounds started with “wanting to get a girl.” The “girl” was his now-wife Jazmin, who helped motivate him to get moving. They began running together and after several months of training, Blais competed in the Peachtree Road Race for the first time. At the end of the race, he proposed to her, and they’ve been together ever since.

He also credits his two daughters for helping him stay on track. “Well, [at first] I didn’t consider nutrition or exercise, so the biggest changes were to make sure they were a part of my daily life. My kids certainly have helped too, because I want to feed them healthy meals.”

Although Blais says the food he eats now is usually healthy, he does sometimes indulge in “chicken wings, cheeseburgers and ice cream like everyone else!” Blais acknowledges that it was a challenge to keep the weight off, but he learned, “It’s a marathon not a sprint, so once you feel comfortable with that, it’s all gravy. Mind you, it’s a gluten-free gravy!”

It’s been a long journey since making Filet-O-Fish sandwiches at McDonald’s, and Blais has learned a lot along the way. He shares some advice with aspiring chefs, saying, “You will most likely make minimum money for six to 10 years, working holidays, all while spinning around in the same five-foot space for each 12-hour day. You will get burned, cut and smell like burning wood and garlic for a long time. You will most likely lose most of your existing friends and most certainly your boyfriend or girlfriend. You in?”

Get to Know Chef Blais

What advice do you have for someone who is struggling to lose weight?
Have small goals and realize it’s mostly mental. Controlling what you eat or cook or buy is the first decision to make.
What is your favorite way to stay fit?
I run maniacally and recently started swimming. But right now, trail running is my jam.
Best advice for parents who need some inspiration for weekly dinners?
Cook vegetables, always make a salad, and get your family and kids involved in meal planning, preparation and cooking.
Best book you’ve read?
I’m a big Malcolm Gladwell fan.
Best place in Atlanta to relax?
Piedmont Park.
Favorite restaurant?
The Spence or Bacchanalia Star Provisions.
Who are the people that help you be your best self?
My wife is my consultant in all things. Mind you, she is a yoga-practicing, organic-vegetable-shopping, vegetarian consultant.

As a nutritionist, owner of New York-based practice Nutritious Life, and co-host of the new show “Cook Your Ass Off,” Keri is passionate about teaching people to “reach beyond a healthful diet and take a whole person approach to health and wellness, both inside and out.”

What was your reaction when you heard about the premise of “Cook Your Ass Off”?
I thought “I love this idea! How has it not been done before?” People seek out health information everywhere, and people love cooking competitions. Yet the concept of adding the health element to the competition had never been done. My passion is teaching health, so I fell in love with this format.
What do you hope the audience takes away from the show?
Healthy does not mean deprivation or lack of flavor. The healthiest foods for you are naturally incredibly tasty.
What is your best piece of advice for someone who is struggling to lose weight?
I would say the thing that has the greatest impact without changing anything else is learning to listen to your body — stopping eating when slightly satisfied and eating when slightly hungry. And eating as much real food as possible.
What is your favorite healthy dish to cook?
My go-to healthy meal that my kids can’t get enough of is baked wild salmon with sesame crust, burnt broccoli and quinoa. Super simple, super healthy, and I always know it is well received.