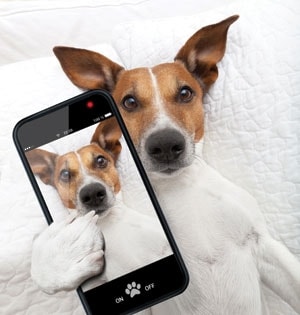 Mr. Olympia Lee Haney Gives Back to His Community

In the last few years, the age of technology has brought with it an era of selfies. We snap them everywhere and with everyone: with friends at dinner, during fun events and – you guessed it – with our pets. For this year’s photo contest, our readers submitted their Best Pet Selfies. Through votes from their friends, family and the Best Self community, the top three contest winners were able to win cash prizes for Society of Humane Friends of Georgia, Southern Animal Rescue and Fix Georgia Pets, as well as prize packages from our contest sponsors and a pet party at Nancy G’s Café. Let’s meet these selfie stars!

Jacki and Fizzle came in first place with an impressive 1,398 votes in this year’s contest. Fizzle enjoys playing fetch with tennis balls and making Jacki laugh with his funny facial expressions. Jacki chose the Society of Humane Friends of Georgia as the pet charity to receive her first place prize money of $250. SOHFGA is a nonprofit organization that has been serving Gwinnett County for 16 years. The organization’s Lawrenceville shelter accepts cats and dogs from animal control, from owners who are no longer able to properly care for their pets and from off the streets. SOHFGA works hard to find perfect matches for each family and animal they work with, and they also help through other initiatives such as such as Jail Dogs, the SOHFGA Spay and Neuter Clinic and the Gwinnett County Pet Project (GCPP). The GCPP reaches out to communities with limited access to veterinary care and provides free or subsidized services to help keep their pets healthy and safe with vaccinations, supplies and spaying and neutering. SOHFGA is supported solely by donations and adoptions, which take place regularly at the Petco on Highway 124 in Snellville.
Details: www.sohfga.com

When Marla came to Widdi as a foster pup, Widdi quickly fell in love and decided to adopt Marla “furever!” Marla is full of energy, and her favorite thing to do is walk on her mom’s treadmill. Widdi chose Southern Animal Rescue as the pet charity to receive her second place prize money of $150. Founded in 2008, Southern Animal Rescue helps rescue and rehome abused, neglected and homeless cats and dogs in the Atlanta area. One of SAR’s primary initiatives is to reduce the number of feral cats and kittens in the area through a trap, neuter and return program. SAR is a small organization without a physical shelter to temporarily house their rescued animals, so they rely on a network of foster parents to open their homes to these pets. SAR supports their foster parents by taking care of veterinary visits and the search for a permanent home.
Details: www.southernanimalrescue.org

Named after the former Chicago Bull, Pippen tries to make everyone he meets a cat person, and Lauren fell in love with him the second they met. He enjoys meeting new people, getting Lauren to pet him and snack time with his canine pals. Lauren chose Fix Georgia Pets as the pet charity to receive her third place prize money of $100. Fix Georgia Pets’ motto is “Together, we can put an end to pet overpopulation in Georgia,” which they are achieving through low-cost spay and neuter clinics, mobile units and the pro-bono services of private practice veterinarians. Fix Georgia Pets puts an emphasis on spaying and neutering because not only will these measures help reduce the numbers of homeless or euthanized pets, but fixed pets are said to be less aggressive, which lowers the risk of bites, attacks and the spread of disease. Fix Georgia Pets has a team of volunteers called the FGP Ambassadors who help educate the community about the importance of animal safety.
Details: www.fixgapets.com

To see more of our pet contest participants, visit our photo page!