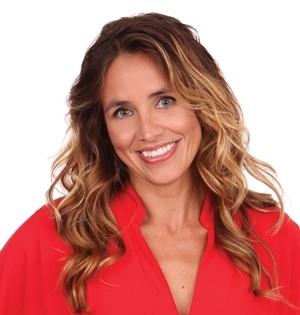 It was something that Tracey Pearson heard too often from young girls.

“I’m just not good at sports.”

She even heard it from parents when they talked about their daughters.

“She’s not the athletic type.”

“We tried sports, but it just wasn’t for her.”

As someone who grew up playing fast-pitch softball and reveling in an energetic outdoor lifestyle, Pearson simply could not understand the negative and defeatist attitudes she kept encountering when she spoke to preteen and teen girls about athletics. And she knew that she had to find a way to change the minds of those impressionable
young women. 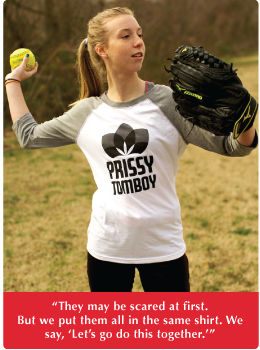 She wanted them to know what it was like to be empowered by sporting pastimes. She wanted them to find their adventurous spirit and experience the confidence that comes with living a healthy and active lifestyle. She wanted them to learn how to disconnect from the need for social media validation and build their self-esteem from within. She wanted them to start exercising at a young age so it would become part of who they are—not an unpleasant chore later in life. So she took action and founded Prissy Tomboy Athletics in March of 2014.

Designed to promote athleticism and adventure for preteen and teen girls, Prissy Tomboy is a lifestyle brand and online community that provides girls with the inspiration, knowledge and resources they need to keep them healthy, active and empowered. For Pearson, the name of her company was a no-brainer. “My parents always called me a prissy tomboy as a kid,” she muses, recalling how she personally found the balance between being feminine and athletic.

During her teen years, while her friends began dropping extracurricular sports either because they lost interest or felt they weren’t good enough, Pearson stayed the course, successfully engaging in all kinds of athletic activities. By maintaining her athletic edge, she was able to develop invaluable skills and an innate drive that have helped her in countless ways throughout her life.

In her personal life, those skills helped her cope with obstacles like her parents’ divorce and her mother’s bout with a serious illness. In her professional life, she tapped into her internal sense of motivation to establish a successful career in the beauty industry and open her own salon with her husband, Erik. Whenever she needed comfort or guidance, she could turn to sports and her lifelong healthy lifestyle. And she wants today’s girls to have that same experience.

“For girls, the athletic title gets stripped away if they don’t succeed right away. And soon enough, they’re going to believe that they’re just not athletic. I wanted to change that culture of thinking,” Pearson says. “Once that non-athletic label is gone and these girls come out of their shell, the world lights up for them.”

The key, according to Pearson, is to help preteen and teen girls understand that they don’t necessarily have to play competitive sports to be an athlete. With so many adventure sports out there, there truly is something for everyone. Pearson explains. “While talking to teen girls, I realized how competitive team sports have gotten today. If you haven’t started playing a certain sport by the time you’re 4, then you’re not going to be able to start when you’re 14. You really have to start at a young age. But you don’t have to compete to be an athlete. The goal is to get out there and try different adventures.” 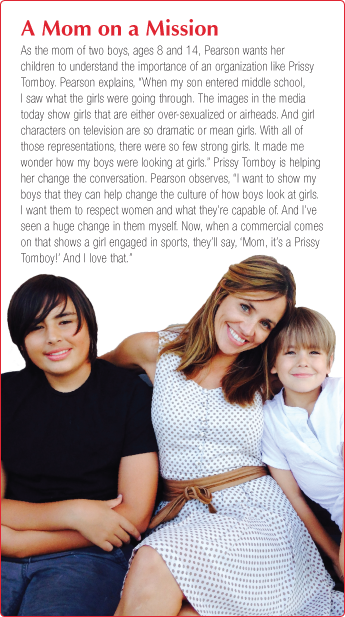 To that end, Prissy Tomboy’s aim is to introduce girls to as many different sports as possible, from archery, golf and Jiu Jitsu to rock climbing, mountain biking, surfing, snowboarding and BMX. Initially, the company partnered with athletic institutions and organizations to offer an array of free clinics and events at various times throughout the year.

The clinics gave participants the chance to check out a sport that interested them without having to make a long-term commitment. “I would talk to parents who were so frustrated. They would say, ‘She tried soccer and hated it. It was like pulling teeth to get her to finish the season. We spent thousands of dollars on a sport she doesn’t even like,'” Pearson notes. “With Prissy Tomboy, they were able to try out sports. They could just get out there and have an adventure.”

Pearson traveled throughout the southeast to speak at schools and in communities so she could explain first-hand the community resources available to preteen and teen girls. She launched an online community for Prissy Tomboy Ambassadors, which recognizes girls for their athletic dedication—often in male-dominated sports—and gives them a forum to share their success stories with and become role models for their peers. She also developed a line of Prissy Tomboy apparel and accessories. And over the last 18 months, the Prissy Tomboy concept has become a bona fide movement.

“We are giving girls what they need, and we are really excited about where we are heading,” Pearson says.
The evolution of the brand has led to the development of the new Prissy Tomboy Adventure Club Pass, which begins in January of 2016. For just $150, participating girls will get six months’ worth of athletic opportunities, scheduled every weekend with the help of community partners throughout metro Atlanta.

The sports offered will include rock climbing, rowing, jazz, hip hop, yoga, golf, paddle boarding, kayaking, roller derby, volleyball and a host of other options. The program also includes a film clinic so participants can learn to create their own sports documentary, as well as an entrepreneur clinic so girls can learn to become effective business leaders. The class options will change every six months and give members the chance to find the perfect athletic fit.

“We are always wondering how we can inspire girls. How we can empower girls,” Pearson observes. “And I love when we get girls together into these kinds of classes. They may be sports they’re unsure about. They may be scared at first. But we put them all in the same shirt. We take down the labels and the barriers. And we say, ‘Let’s go do this together.’ And they go from being scared to smiling and being so happy. It’s so empowering. Right away, they see that they can do it. I see the change happen in them so quickly. They realize that they shouldn’t be afraid of things in life.”

That shift in perspective is exactly what Pearson wants every preteen and teen girl to experience. “I want girls to know that adventure needs to be part of your life,” Pearson says. “There is so much out there in the world. And so much comes from travel and being in nature and experiencing other cultures. You need perspective on how big the world is. You need to see the world from the top of a mountain and to go to the ocean. The things you remember in life won’t be playing a video game for eight hours or being on social media all the time. That’s not how you create wonderful memories. You have to go out there and have an adventure. Those are the things that will stay with you forever.”

So much has happened—and changed—for Prissy Tomboy in such a short amount of time. And Pearson is ready to move full steam ahead into the future with her brainchild. Ultimately, the goal is to launch the Adventure Club nationwide, beginning with southeastern cities like Jacksonville, Savannah and Nashville. Pearson also hopes to take advantage of her love of California, where she spent summers growing up, and bring Prissy Tomboy to the west coast. She even hopes to expand the Adventure Club to include opportunities for adult women, with such options as skydiving and motorcycle riding. No matter where the road leads, the mission will remain the same.

“We want to maintain our focus on empowering girls. We never want to take away from that. We want to figure out how we can break teen girls out of their shells and make it awesome,” Pearson concludes. “I want girls to have faith in how strong they are. And as a community as a whole, we need to have faith in them too. We need to teach our youth how to live a happy and full life. And when our girls have that confidence and that peace of mind, they will be able to live a truly healthy lifestyle.”