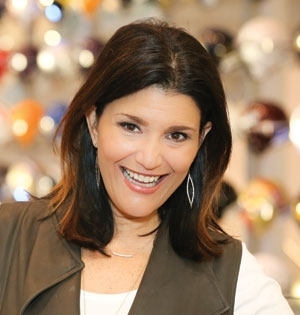 “There isn’t a day that goes by that I don’t miss being on the radio every day,” says the esteemed media personality who began her enduring and notable broadcasting career in Atlanta nearly 20 years ago doing the night show from 7 to 11 p.m. on classic rock station Z-93. She became well known for her great humor and charisma, as well as her outstanding musical taste, which translated perfectly when Davis moved to the coveted midday slot. In 2004, Z-93 changed to Dave-FM, and Davis remained as the host of the lunch hour, which encompassed her popular radio request show, “Radio Free Lunch.” However, everything changed in October of 2012. Dave-FM switched formats completely and became 92.9 The Game, a 24-hour sports talk station. And Davis no longer had a full-time job in radio.

“Everyone thought my phone would be ringing off the hook, but it didn’t happen. And it wasn’t because I wasn’t hard working or talented. The jobs just weren’t there,” Davis explains. “Media has changed. Just like print, the radio industry has gone through a big change with digital media coming onto the scene. I realized that I had to diversify to find work and remain relevant.”

When her phone finally did ring, a rather unexpected opportunity was calling — one that brought together her professional and personal passions in a surprising new way. In early 2013, Davis was offered the chance to join the weekly television show “Atlanta Eats” with Steak Shapiro. A longtime foodie who often discussed food-related topics on her radio show, she has had her finger on the pulse of Atlanta’s (and the nation’s) culinary scene since long before chefs joined the ranks of today’s celebrity figures. (She actually interviewed Anthony Bourdain on the radio before he became a household name.) It made her the perfect person to contribute stories to “Atlanta Eats” about local restaurants, rising chefs and a host of other topics. “It was something that was already in my universe,” she notes. “I was so flattered to be a part of it, and it made sense for me.” 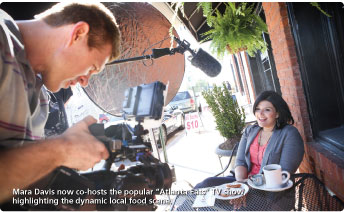 Of course, Davis was used to sitting behind a microphone — not standing in front of a camera. “I had to learn how to be a good TV host,” she confesses. “I had never been on a real television shoot before. I had to learn how to do a standup, how to work with a crew and how to be on set. And I’m still learning. But with every shoot that I go on, I pick up something different. It has been the greatest gift to learn to be on TV. It’s been a phenomenal opportunity, and it’s been so rewarding.”

While she is enjoying her entrance into the television realm, she maintains her deep affection for the career that put her on the map. “I love radio. I grew up being a fan of it. And when I first got into it, I knew right away that it was just so me,” she says. “I love the intimacy of it. Most people listen to the radio in the car by themselves. So when you’re listening to someone on the radio, it’s like spending time with a great storyteller. That really attracted me to the industry. And I love music. So I followed my heart. It was part luck and part talent — and I had a really tremendous career.”

Fortunately, “Atlanta Eats” has allowed her to employ her radio roots as well with a complementary radio show that initially aired on 640/WGST-AM; starting on December 14, it will run from 4 to 5 p.m. on Saturdays on 106.7 FM. The talk format of the show has always interested Davis although she’s never pursued the avenue, mainly because most talk radio shows not only are hosted by men, but also focus on politics. “There are no women in talk radio. And there are no real radio talk shows about food,” she reveals. “To me, food is like music. It’s so universal, and it brings people together regardless of age, race, class or nationality. We are all connected by food. So on the show, we talk about everything, from why pumpkin spice has gotten so out of control to whether or not bacon gives you cancer… talk radio doesn’t have to just be about people yelling at each other about politics!”

But her reemergence (so to speak) in radio doesn’t end there. Davis also landed a gig as a music contributor for 90.1 WABE, Atlanta’s NPR Station. Her show airs every Friday during the morning edition and allows her to keep her hand in the music industry. So does the fact that she has carved out a very prolific niche as an emcee for a wide variety of citywide and regional events, charity functions and music festivals, including one of her all-time favorites, the annual 30A Songwriters Festival. “That is a total dream gig,” she declares. “Not only do I get to go to 30A, but I’m on the main stage for the entire weekend. It really keeps me in the business.” She also has emceed everything from the Free Entrepreneurship Bootcamp with Coca-Cola and the Women’s Foodservice Forum to Giada De Laurentiis’ Happy Cooking Tour stop at the Fox Theatre.

Mara Davis credits her ongoing use of social media with keeping her name out there while she forged her new path, as well as for helping her stay connected to her loyal fans, many of whom have followed her from her days at Z-93. Active on Twitter and Instagram, she believes that her work in that area has opened the door for new opportunities and she’s learned to embrace the power of the medium. “Social media has been incredible for me. People tend to resist change, but you have to step outside of your comfort zone,” she advises.

She’s also using her voice and platforms to bring awareness to the charities that are near and dear to her heart – such as the Atlanta Community Food Bank, which distributes over 50 million pounds of donated grocery products a year to more than 600 nonprofit partner agencies that feed the hungry, The Giving Kitchen, an organization that provides emergency assistance grants for employees of the local restaurant community, and a variety of animal rescue and adoption organizations. In addition to helping those groups with social media campaigns when appropriate, Davis volunteers her time and offers her emceeing talents for events related to the causes.

Adding a philanthropic spin to her freelance work in television and radio continues to be a focus for Davis— something she was often able to do at Dave-FM. “It felt so great to show up at work and raise money for charity,” she recalls of her days in commercial radio. While it’s more of a challenge in public radio, she strives to find new outlets for her charitable activities. For instance, she recently introduced an innovative idea for securing donations for WABE during her Friday morning show; those who made a donation were qualified to win a multi-course dinner for four at Restaurant Eugene with herself, Chef Linton Hopkins and her co-host Steve Goss. “I am trying and pushing so hard in every area I can. It’s the only way to get things done,” she says.

It’s that kind of persistence that has allowed Mara to turn what could have been a terrible unemployment situation into something completely amazing. “Positivity is key. Opening your mind is key,” she asserts. And looking at a set of circumstances in a different light helps too. Davis now sees that her new freelance schedule brought her a truly gratifying opportunity in her personal life, allowing her to spend more time with her husband of 13 years, Michael Kane, and their 10-year-old son, Charlie. “In so many ways, I am fortunate that this career exploration happened at this time in my life,” she recognizes. “To be in the carpool line and go to soccer games means so much … I have that freedom now, and I’m thankful for that.”

Additionally, Mara Davis is grateful for some advice that she received when she was “down in the dumps” after her tenure at Dave-FM ended and she was looking for work. “Someone once told me that you have to go out of your way to figure out how you can use your resources to help other people. In turn, you’re helping yourself because everything leads to something else,” she observes. “You can reinvent yourself. Everyone has a second act. I’m working on my second act now.”