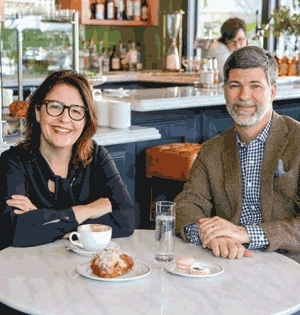 John and Vivian Bencich have left their mark on Atlanta. All over Atlanta. From incredible commercial spaces to sleek retail locales to gasp-inducing restaurant designs, the Bencichs and their Square Feet Studio team elevate the cityscape with a vision that’s backed by talent, ingenuity, experience and deft skill. They believe in the power of telling a story through architecture and design, of bringing to life a setting through its structural and aesthetic elements.

The husband and wife duo met while in graduate school at Georgia Tech. They each worked in different architecture and design firms for over a decade before coming together in 2001 to establish Square Feet Studio. Now their Krog Street studio backs up to the BeltLine and hums with a staff of about ten—architects, interior designers, urban planners and some, like Vivian, who are schooled in both architecture and interior design. You love their work … yes you do. From The General Muir to Kimball House, from Room & Board to R Hughes Atelier, from Sid Mashburn’s to Staplehouse, from Pink Barre to Preserving Place to parts of Ponce City Market … the list goes on and on, including some of the chicest locales ever to rise up in this metropolitan phoenix nest.

To hear the Bencichs discuss their design process and focus reveals their commitment to the city of Atlanta. A commitment recognized by awards and accolades merited through a fervent mission to “make every square foot of our designs smart, simple and sustainable by using resources that minimize the impact of our work on the environment and maximize its benefit for future generations.” They respect the inherent character of a project setting and feel a sense of responsibility for what they are contributing to the area. For their own home, they chose a home ripe for renovation and surrounded by the businesses, parks and museums that add to the character of their living experience.

Whether for home or for business, “There’s a reason you pick the location,” John says. “We try to find what’s special about that location. I got into this great discussion with [some restaurant] clients of ours. They talked about how dining, well, how going out, is a way to find out more about your neighborhood and community. So the places that you can sit down—restaurants, bars, coffee shops—are the easiest places to hang out for a while. When someone picks a location, there’s the immediate building as well as the ethos of the surrounding area. If you want to find out about Atlanta, what do you tell people that come to visit Atlanta to do? Tell them to check out the BeltLine and stop at Ponce City Market. Tell them to get out and discover these neighborhoods. If you’re not from Atlanta, you don’t know it’s all there.” The couple says they are drawn to parts of the city that are walk-able, enjoying long strolls through the neighborhood with their daughter
and dog.

Vivian remembers, “With Atlanta, for me, having been a child of the 70s, coming down here to visit from North Carolina, you went to Underground and Crofts, and my parents had mugs from Pitty Pat’s Porch. We went up to Lenox. … The buzz was about sports teams, Buckhead, the Omni Hotel … very disparate. The highways split it all up. Yet, there are pockets of neighborhoods.”

The seemingly hidden history of Atlanta intrigues both of them. Uncovering the original use for a building or the origin of a certain purlieu fuels their creativity and pulls them in closer to the people and places that built the city. “Did you know that all the neighborhoods used to be called ‘wards’ and the Old Fourth Ward is the only one that’s still called that?” John explains, “Old Fourth Ward was a heavy textile area, there was a cotton mill across the tracks. Many of the buildings were for storage and workers’ housing. That’s part of the story of that area. The Civil Rights Movement is part of it. The gentrification now, the kind of in-town living done now, all becomes part of the story.”

Chapters of the Atlanta story re-open throughout the city. The area around the Civic Center emerged in the 1880s as Pittsburgh, called such for its industrial feel, reminiscent of the Northern steel town. Nearby Castleberry Hill may have been a red-light district in the 1850s before becoming a thriving warehouse area. East of there, across the highway, sits Peoplestown, building up in 1885 as the Atlanta Electric Railway moved along Capitol Avenue. Behind Historic Oakland Cemetery, a landmark itself, lies Cabbagetown, which popped up near the Fulton Mill and supposedly derived its name from the pungent aroma of cabbage floating from the small cottages of the poor Scots-Irish millworkers. The list of similar histories goes on and on—Reynoldstown, Mechanicsville, King Plow, Druid Hills, Hapeville. From Jonesboro to Newnan up to Marietta Square and Roswell Mills, the “old” districts long to shine for future generations and current revitalization efforts can help them do it.

While their firm does not focus on residential work, their expertise applies to a variety of projects, as does their process for developing a stand-out project. John credits setting an “intention” for the overall project as one of the first and most crucial steps to success: “It can be tough, but it’s important to find that filter to help you make good decisions. That’s part of the process. It’s collaborative. There are things [clients] bring to the table that we don’t have and we have experiences to bring too. We talk to them about what we know, about the materials that are out there and the resources available. We can help them see things in a new way—that they have never considered. We don’t tell people how to make decisions. We are steering them toward something that makes sense and is what they need.”

Vivian agrees, further adding her belief that establishing that strong collaborative partnership with the client enhances the creative experience. “It really is about getting a good match. What do you want to sink your teeth into? We get the initial phone call or email and then we come to the office and ask the team if they are excited about it. Ask what they think. And they give wonderful feedback. We tend to tag-team, along with the rest of the office—’look at this, read this, tell me what you think.’ It comes down to looking at the projects that we connect to. We build what we want to see, what we want to visit, and try to say what our clients want to say. Sometimes clients come in firm with the directive and we get on board to make it work. Sometimes they come in and they have no idea, but we figure it out. We need to come up with a story to reflect what is here. A story that makes sense.”

“Yes, the story of the place,” John confirms. “There’s a term in the architecture world called the genius loci and it means the ‘spirit of the place’—the essence. A great architect actually said that about one of our projects when we got the ADAC award. He said, ‘There’s a genius loci to their work, when you go in, it feels like it should be there.’ That was an incredible compliment to us.”

The Bencichs and their Square Feet Studio team voice enthusiastic support of those efforts.

And they’re incredible talent rallies the attention and support that encourages all of us to build new stories while honoring history.