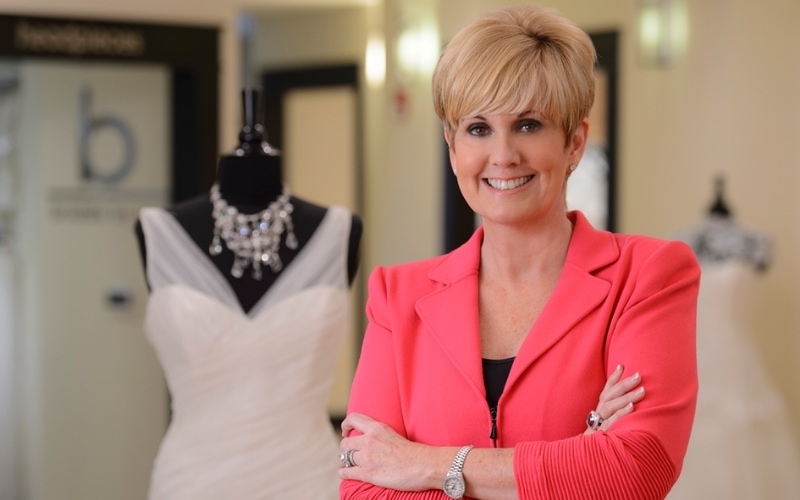 In her own words, Lori Allen is “always the strong girl.” In her wedding gown retail store Bridals by Lori, featured on the TLC show, “Say Yes to the Dress: Atlanta,” Allen is the problem solver who clients and bridal consultants alike run to for help. She’s not afraid to look an ornery bridesmaid square in the eyes and remind her, “This is the bride’s day,” nor does she shy away from the hard work necessary to make her 33-year business a success. She’s the self-described captain of the ship — but what happens when the captain is out of commission? On April 13, 2012, Allen found out that a routine mammogram had shown some atypical cells in her breasts: cancer. Remembering that day, she recalls, “I have never been more shocked, because I consider myself super healthy.” She ate well, exercised regularly, stayed current with her check-ups, and cancer did not run in her family, so she was “absolutely flabbergasted” when she received the news from her doctor. Struggling to make sense of the diagnosis, she describes the emotional rollercoaster that ensued. “You’re crying, and you’re feeling so sorry for yourself, and then you get mad, and then you’re angry with God, and you’re like, ‘Why me?'” As we speak with her, Allen gets a little choked up at these memories, saying, “It’s hard for me to say, still. It’s still fresh — it’s just been a year!” But true to form, she’s quickly back to her upbeat self, a moment later laughing as she says, “Well, why not me?”

Why not her, indeed. Thanks to her show on TLC, Allen knew she had a huge platform of female fans who could benefit from seeing her journey through treatment. After considering it only very briefly — two days after her diagnosis, in fact — she decided, “I’ve got to do something good with this. I’m not going to hide it, I’m not going to be ashamed about it and I’m going to tell the world I’ve got breast cancer.” Since she was already filming “Say Yes to the Dress: Atlanta” and “Say Yes to the Dress: Bridesmaids” at the time, to Allen it was only logical for TLC to film her cancer journey as well. In her trademark Southern accent, she said to her friend and Say Yes Executive Producer Jennifer Holbach, “I think I want y’all to film this.” TLC gave it the green light in a day, and the October 2012 special “Say Yes to the Cure” was born.

Unlike the “Say Yes to the Dress” shows, this special was not filmed with “a whole big crew following me to my doctor’s appointments,” Allen laughs. The entire special was filmed by “just Jen [Holbach]. That’s it.” The camera shows her decision-making process and aftermath of two lumpectomies and, eventually, her double mastectomy on July 3, 2012. Allen held nothing back, revealing all the emotions and vulnerability that come along with treatment, which she admits was “very, very difficult for me to do.” Thankfully, she was surrounded by support. Not only did she have her friend Jennifer behind the camera, but also her loving husband, two children and 80-year-old mother were with her every step of the way. Allen’s coworker Monte Durham, who is also featured on “Say Yes to the Dress: Atlanta,” helped keep her spirits up too. “He sent me a card every single day. One day it would be like ‘I miss you, I love you with all my heart,’ and the next day it would be like ‘Get your ass back in the store!'” Allen remembers with a laugh. Allen also found strength and support from local Atlanta resources like TurningPoint, a non-profit breast cancer rehabilitation center. Both her surgeon and her plastic surgeon recommended TurningPoint, which offers breast cancer patients everything from physical therapy after surgery to counseling and nutritional guidance. Allen worked with Jill Binkley, the executive director who is a breast cancer survivor herself. Allen says, “I could ask her anything I wanted to,” and her therapy “helped me mentally, emotionally, and physically.” Convinced of TurningPoint’s benefits, Allen emphasizes, “If I had just gotten a double mastectomy and then just not gone to therapy, I think it would have taken me a lot longer to recover from this. I do.”

Though her battle with breast cancer and the simultaneous filming were exhausting for Allen, she says, “I felt like I was doing something good out of something bad, so I just kept plugging away.” And she certainly was doing something good—since the special aired last year, she has received thousands of letters from women who now know that breast cancer is nothing to be ashamed of. Many are now getting their routine breast exams, seeking treatment and drawing strength from Allen’s example. Because of this profound impact on women’s lives, “Say Yes to the Cure” received the 2013 Reelscreen Award in the category of Best Health & Well-Being Programming. The celebration of Allen’s story continues this year on October 4, when TLC will air an updated version of the special that will show just how far Allen has come.

Today, Allen feels better than ever, getting stronger physically and emotionally every day. She still eats healthily and exercises, though she admits with a laugh, “I don’t really like sweating,” so she prefers swimming in her backyard pool and going on long walks with her Bichon Frise. She’s also been seized by the desire to completely redo her house. “We’ve been through a really traumatic year and we want things fresh and new. It’s a new beginning.”

Allen is also back to work in her store, her love for bridal consulting not dampened in the slightest. She tells us that buying a wedding dress is “not like going and buying a pocketbook,” because it is really about “everybody giving you the nod of approval that the next step in your life is okay. And the nod of approval is everybody agreeing on this dress.” After speaking with Allen and hearing her enthusiastic spirit and zest for life even after the frightening, uncertain journey of breast cancer, we think Allen deserves the biggest nod of approval of all.

We couldn’t let Lori go without asking her about her own wedding dress. She wore a long-sleeve organza House of Bianchi gown with a natural waist and a scooped neckline, paired with a cathedral veil. She admits that “It was very seventies when you look back at the pictures,” but she says she loves her dress to this day.