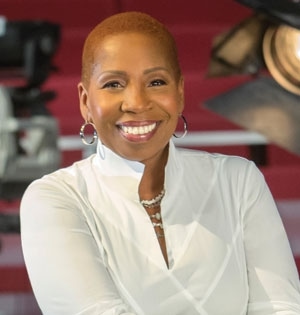 In these days of smart phones and ubiquitous Wi-Fi, it’s never been easier to hop online and find everything from healthy recipes to at-home workouts to relationship advice. But somehow, even the best Pinterest boards and most inspiring Instagram accounts don’t always lead you to the life you want. So where do you turn? Iyanla Vanzant, star of OWN’s “Iyanla: Fix My Life” and member of Oprah’s upcoming “The Life You Want Weekend” tour, may have answers.

Though it’s tempting to want happiness to be as simple and straightforward as a “top 10” article, Vanzant admits that it’s not that easy. In her 25 years of ministry, her time on “The Oprah Winfrey Show” and now her own series, she has realized that when it comes to helping people live a good life, “There is no formula. I can’t say do this, do that, do this.” This is partly because the guests on her show have widely varied backgrounds. She gives therapeutic support to people dealing with everything from absent parents to substance abuse to pain from past relationships. Because of those differences, Vanzant says all she can do is show the way through her own personal story. “What I speak about is what I’ve learned from experience or what I am learning from experience,” she explains.

And experience is something Vanzant has in abundant supply. Poverty, abuse and teen motherhood characterized her early life, but in her twenties, she knew something had to give. In the no-nonsense fashion that makes her show so compelling, she simply made a choice to change her life. She remembers thinking, “I am going to continue to do what I am doing, feel like I’m feeling, or I am going to choose something different.” Ultimately, she chose something different, recognizing, “There is something bigger and greater than just my human frailty that I want to rely on.”

She started her new life and new spiritual journey by taking a new name, changing from her given name “Rhonda” to “Iyanla,” which means “great mother” in Yoruba. This transition helped her redefine herself in a healthier light, and it paved the way for more positive changes, eventually leading to a regular appearance on “The Oprah Winfrey Show” as a relationship expert. In 1998, she began providing her tough-love expertise on the show and helped guide guests and viewers to fuller, happier relationships. During that time on the show, Vanzant says she realized, “No matter who you are talking to, no matter what you are doing, it is either a reflection of you or a reflection of God.” So during her service as a relationship expert, Vanzant herself was continuing down her own path of self-acceptance, healing and greater understanding.

Vanzant was also enjoying a successful publishing career, penning best-selling books such as “One Day My Soul Just Opened Up” and “In the Meantime.” She was headed for the top of the world, but soon her vision got further out of reach. A divorce from her husband, a cancer diagnosis for her daughter, a declaration of bankruptcy and an abrupt split from her partnership with Oprah led to dark times in her life. She remembers wondering, “Why am I asking for this, praying for this, wanting this, and it is not showing up?” But as Vanzant now believes, life isn’t just about wishing for what you want. “It’s not just ‘ask for this’ or ‘hope for that,'” she says. Instead, creating the life you want “is a function of your consciousness, which requires faith and trust and belief. If you’re asking for something but not believing you’re going to have it, then you are not going to manifest it.” These difficult times brought with them spiritual lessons for Vanzant, which she used to better craft the life she wanted.

One of her first steps to achieving that life was forgiveness, and forgiveness on a grand scale. “Forgive everybody for everything,” Vanzant says. “One of the reasons we don’t have the life we want, don’t have the joy, the love and the things we want, is because we are holding onto hurts, wounds and anger.” Another step to achieving the life you want is thinking higher. “Think higher of ourselves, think higher of everyone else,” Vanzant says. “You are not your bad behavior. You are not your current circumstances. We just have to learn to think higher.” These spiritual truths have served Vanzant throughout her life, bringing her out of her challenging past all the way to her renewed relationship with Oprah and her recent 25th anniversary in ministry.

Along with Oprah and other influential thought leaders, Vanzant will go in depth with these lessons and more at the first stop of Oprah’s “The Life You Want Weekend” tour, right here in Atlanta on September 5 and 6. Whether you need to heal from past hurt, forgive a loved one or simply want to live a better life overall, Vanzant’s message can help. But as she says, “It’s an inside job.” Nothing can help you quite as much as your own determination to change – not even her lessons. When all is said and done, creating the life you want starts with you.