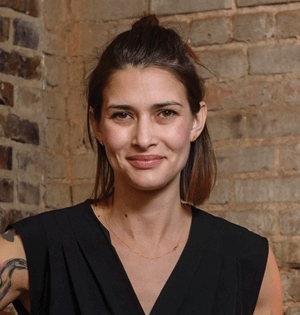 When you are young and in love and have your entire lives ahead of you, you don’t expect your marriage vows—for better, for worse, in sickness and in health—to be tested for a very long time.

Fate was not so kind to Jen Hidinger and her husband, Ryan. On December 21, 2012—the day ancient Mayans predicted the world would end—he was delivered a diagnosis that was the end of their world as they knew it. The diagnosis? Gallbladder cancer. Stage 4. Ryan was 35. Jen? Only 30. The couple had been married seven years and together since Jen was 17.

At the time, Ryan served as chef at Muss & Turner’s after stints at local restaurants like Bacchanalia and Floataway Café. He and Jen ran a popular supper club (with an almost cult-like following) called Staplehouse out of their Grant Park home and dreamt of opening their own restaurant one day. Ryan had recently returned from a trip to New York City and had come down with the stomach flu. He recovered, but stomach pain and cramping lingered in his abdomen for ten days. He scheduled an ultrasound with his family physician.

“I just vividly remember the placement of the chairs, the pale yellow walls of this small doctor’s office, these old vinyl countertops and a black Dell computer screen sitting to our right. Ryan and I were holding hands waiting for the doctor to give us some information. We were not even remotely prepared for the information that we got,” Jen recalls.

The diagnosis of stage 4 cancer was devastating, and the prognosis was even more chilling. The cancer had spread to 90 percent of Ryan’s liver and a portion of his lungs. He was given  less than a five percent chance of survival and only six months to live.

“I didn’t really even take it in, at least not in its full reality, until after he passed away [in January 2014]. I was only 30, and I had my entire life ready and planned out with him. We were going to open up this restaurant, and it was going to be our first child, and then we were going to have babies and raise them around the restaurant. These were things we talked about for so long, since I was a senior in high school, and they were just right out of arm’s reach at that point.”

Those dreams were immediately put on hold as the couple turned their attention to Ryan’s treatment and care. He went through several rounds of chemo, and the couple radically changed their eating habits, following a mostly Paleo diet—unusual for a chef, especially one known for his fondness for chicken wings and gummy bears.

“Cancer Treatment Centers of America, where Ryan was treated, is huge on self-healing and the reduction of the risk of cancer-treatment drugs on the body,” explained Jen. “We used a lot of natural remedies like Melatonin and Vitamin C. Ryan rarely wanted pain medications.”

Meanwhile, the community rallied around the Hidingers, organizing a fundraiser called Team Hidi shortly after Ryan’s diagnosis and raising over $250,000 for the couple’s financial needs in a single night. Jen still feels humbled about that night, saying, “I remember standing on that stage [at King Plow] during the event and being surrounding by almost 1,000 people who were there just for us, cheering for us, donating money to us, just out of selfless love and devotion to a couple. It was really a profound moment of responsibility, to take that support for what it’s worth, accept it and let it flood over you. Because it’s healing, and it can push you forward. More than just the financial support … the people that were cheering us on were completely inspiring and motivating to us. And because of that selfless desire to flood our lives with good, we wanted it to flood someone else’s life.”

An Outpouring of Love

That flood of generosity has washed over 365 lives and counting. That’s the number of lives The Giving Kitchen (TGK) has impacted in the two years since Ryan’s passing.

Overwhelmed and grateful for the peace of mind given to them by the community in their time of need, Ryan and Jen co-founded TGK, a nonprofit organization that supports Atlanta restaurant workers in times of unanticipated crisis. With an average grant of $1,500 to qualified applicants who need assistance with everything from basic living expenses after an accident or house fire to care-related expenses for their own illness or that of a loved one, TGK has donated more than $600,000 to Atlanta restaurant workers. The initial transformative Team Hidi event has become an annual celebration of life, now in its fourth year and raising nearly $1 million so far in support of one couple helped in their time in need.

While not involved in the day-to-day operations of TGK, Jen serves as its spokesperson, sharing her story across the country. “Sharing my story has really helped me heal,” she professes. “For a friend or a  stranger to be able to relate to my story, to be able to be more open about death or cancer or whatever struggles, it has really kept me evolving and progressing and growing and learning and has done leaps and bounds for my own mental well-being.”

Jen has found new understanding of her life and purpose by evaluating the lessons of this journey upon which she was so suddenly placed. “I’ve learned more about myself after Ryan died than I ever had before—ever. We were together for such a long time and at such a young age and such developmental years, throughout our 20s. That was a majority of what I knew. And I was in love with it. And to learn who I am, and am becoming still, after [his death] was and is dark and really difficult.”

How did she get through it and begin to think about the unthinkable? “I once read something while Ryan was going through treatment about just getting out of bed and making the bed. If you can do that one simple thing, that one step, you can keep adding other steps. It really resonated. I deemed it my year of ‘yes.’ I basically said ‘yes’ to anything. And my only disclaimer to very close friends was that my answer to going out will be ‘yes’, but if I cancel because I can’t physically get out of bed, just be okay with that.”

Those baby steps toward healing slowly gained momentum. She found her stride. She picked up the pace and quite literally started running.

“I remember getting out of bed in early 2013 and going for a walk. I sobbed the entire way, just releasing the emotions, and I got a pull to move my feet faster,” she says. “I walked some, jogged some, walked again, and then it eventually turned into less walk and more run. I didn’t force it. I didn’t
put myself on a schedule. I didn’t do it for any reason other than I am going to get up. And then it became, ‘I want to get up, I want to go for a run.’”

Jen ran her first 5K in August of 2014, crossing the finish line at a neighborhood race in just under 33 minutes—running the whole time. “One of my biggest victories of 2014 was being able to run that first 5K and to finish it strong. I can’t even describe what that challenge and victory felt like for me, this individual who has been through hell and back.”

And that dream of a restaurant? It became a reality in September 2015, when Staplehouse opened its doors on Edgewood Avenue in the Old Fourth Ward. The restaurant is a true family affair, with Jen as business manager; Ryan’s sister, Kara Hidinger, as general manager; and Kara’s husband, Ryan Smith, formerly of Empire State South, cooking in the kitchen—and to rave reviews. With a stunning design from renowned local firm Square Feet Studio, the dining room features 40 seats at mostly communal tables, a cozy bar and a covered patio overlooking a small pond and secondary backyard kitchen. With seasonal a la carte and five-course chef’s tasting menus, Staplehouse is the casual neighborhood restaurant Ryan wanted, and it also provides a unique funding model for his other legacy, The Giving Kitchen.

Staplehouse is actually a for-profit subsidiary of TGK—all after-tax profits from the restaurant benefit the nonprofit, keeping the cycle going—serving sustenance far beyond the tables of the restaurant and supporting the culinary community-at-large for years to come. In addition to Team Hidi, TGK partners with Sweetwater Brewing Company for the annual release of “Second Helping,” a beer Ryan helped to develop before his passing, and is the beneficiary of dozens of local events ranging from Atlanta Eats Live to the Atlanta Cheese Festival.

As for Jen, she’s still running—and running the restaurant, while also being a doting aunt to Kara and Ryan Smith’s daughter and mom to three dogs and counting. “I would have 237 dogs if I could. I’m rather a large sap when it comes to dogs—and Publix commercials.”

She finds joy in her community and in meaningful relationships with those in it.

“When you really just allow yourself to be open to people, places, hobbies, running … to life—sickness, health and even devastation—you appreciate the beauty of love so much better. I truly believe that the more you understand what the pain and heartache feel like, the more you appreciate the other side of it.” And, perhaps, serve up a little more of the peace for which we all seem to hunger.