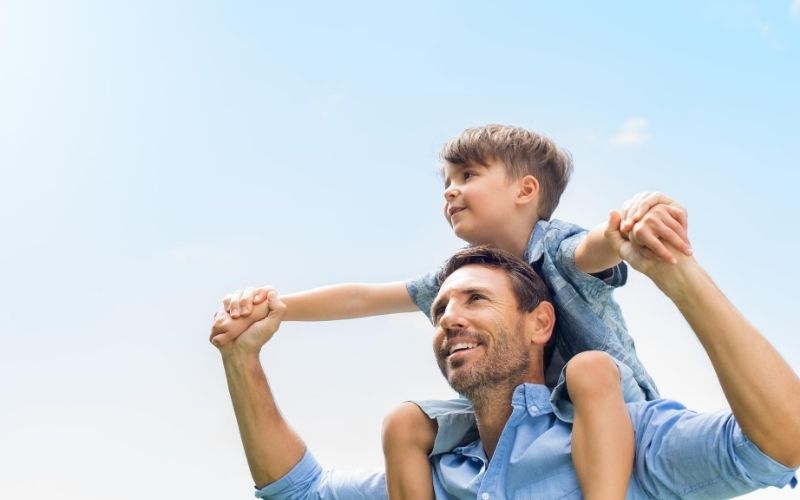 When that 1974 folk song, “Cat’s in the Cradle,” by Harry Chapin starts playing on the radio, it triggers a lump in the throat or misty eyes. Those precious childhood years are fleeting, and all too often, even the most well-intentioned fathers may struggle as life’s busyness (think work, school, errands, activities) derails efforts to spend quality time with the kids.

Strengthening those parental bonds to develop a father-son relationship into mentorship is important. Having a dad who shines as a positive example can give boys a solid foundation and reinforce the values that form their core identity. Establishing special father-son traditions provides a consistent outlet for nurturing those values and building confidence in that identity. These little habits and rituals clear some common ground for generations to cultivate camaraderie and connection. And, these local men can attest to the incredible impact that these Atlanta father and son activities have had on their families.

Patrick Flynn says his father, Frank, started running for exercise long before it was a trend. He remembers his father’s runs around their Roswell neighborhood vividly. “Neighbors used to call my mom and ask what Frank was doing or where he was going,” Flynn chuckles. “One day I just started running after him, chasing him,” Flynn continues, recalling how his own love of running took hold. “It’s my favorite form of exercise. I’d rather be outside running, and I think Dad feels the same way. I don’t even think about the physical fitness benefits, it’s more of a mental boost.”

In 1980, the two ran their first AJC Peachtree Road Race together and have continued to do so ever since. “Dad is 81 now and hasn’t missed one; I’ve only missed three. Over the years, other family members and friends have occasionally joined us, but he and I are the ones that established this as our tradition,” says Flynn. “He’s always trying to beat his age for his time, so this year he’ll try to run it in under 81 minutes. He’s an inspiration.”

The elder Flynn runs, jogs or bikes every day, often riding with a high-mileage group. But, it’s the running that bonds father and son. “When I was younger, we trained together. As I grew up [and left home] it became about meeting up for the race,” Flynn notes. The two follow each other on the MapMyRun app and often discuss their times, techniques, training or diets. “It’s reinforcing positive peer pressure. And, it’s my quality time with my dad,” he confirms. “No matter what is going on in our lives, we know we are going to meet up at Peachtree and Lenox on the Fourth of July. It’s the ‘due north’ of our relationship.”

For professional DJ La Verio (LV) Barnes, learning the definition of a “good dad” has become a part of a larger goal. As founder of the nonprofit Cool Dads Rock (CDR), LV seeks to both motivate and support men in Atlanta as they build a strong foundation with their families and their communities. “I didn’t have a father present [in childhood]. I never wanted my child to feel how I felt. Although I had good role models to look up to [uncles, cousins], I wanted my child to have a consistent influence,” says Barnes. “I had a friend going through a difficult custody battle some years ago and I posted something on social media with the hashtag #cooldadsrock. Then I realized that I know so many great dads doing stuff with their kids and not always showing it.”

Others picked up on that hashtag and soon the group had a dedicated Facebook page celebrating fatherhood, which gave a forum for support and empowering fathers. By 2013, that grew into the Cool Dads Rock organization, which encourages fathers to build lasting relationships with their children by facilitating projects and events as well as offering resources for support. “Men tend to sit on stuff for a long time and it takes a certain comfort level to roll out conversations,” Barnes concedes.

For Barnes and his son, Anderson, the annual CDR Soapbox Derby gives them a mutual creative endeavor. “We have ownership of the whole project—planning, building, figuring it all out, learning together. The derby is the platform, but it’s the whole process leading up to the derby that is what’s remembered and a shared experience,” Barnes says. The organization’s fifth annual Derby will take place on August 5 at Historic Fourth Ward Park. “That’s probably our favorite event with the group. But we do other things too, like ‘Milkshake Fridays’—every Friday, I pick him up from school, we go get milkshakes and sit down to rehash the week. He knows he has that time with me and he looks forward to it every week. I never had that,” Barnes remarks. “It’s special for both of us.”

David Abes, chief operating officer of Buckhead Life Restaurant Group, found a way to turn a health issue into a motivating project. When his son, Mitchell, was diagnosed at age 2 with Type 1 diabetes, the Sandy Springs-based Abes family sought out avenues to get involved with JDRF (Juvenile Diabetes Research Foundation). “We immediately became active in the One Walk program that October,” Abes says, “and it became a tradition. Over the years, family and friends have joined us. We raise funds, make T-shirts, and last year we chaired the walk … but it’s really something that Mitchell and I get behind together.”

Abes has observed the way this level of consistent involvement has nurtured the charitable spirit of his son, who is now in high school. “It’s shown him the power of giving back in such a direct way,” he notes, “and I’m sure he’ll carry that with him throughout his life.” In fact, his son also focuses volunteer efforts on other health-related issues, particularly working with the Atlanta Community Food Bank to advance local hunger relief.

Abes received similar influence from his own father, Dr. Marshall Abes, a dentist who taught at Emory University and regularly offered up dental care for nonprofit clinics. “He is still very committed to community assistance and volunteers his services at the Ben Massell Dental Clinic,” Abes says of his dad. “His example to all of us has always been about sharing your talents and giving back. He’s very close with his children and grandchildren, so he has a great bond with Mitchell, too.”

Buckhead/Sandy Springs-based radio host Bert Weiss has also found common ground with his sons through their mutual commitment to community action. Both of his sons share his passion for serving others and are fully devoted to the Bert’s Big Adventure (BBA) program, turning this mission into a special family tradition.

Since 2002, this nonprofit organization, which was founded by Bert and Stacey Weiss, has arranged spectacular trips to Walt Disney World for children with chronic and terminal illnesses. Each year, a new group of deserving kids—and their families—are treated to surprises galore on this adventure of a lifetime; the volunteers that assist on the trip give complete focus to the patients and their families in order to provide a magical journey to the “Happiest Place on Earth.” The Weiss boys, Hayden,14, and Hollis,10, have truly grown up along with BBA. “They never miss the opportunity to be involved and over the years have made some great friends within this community,” Weiss says. “They aren’t quite ready to go on a trip yet. That’s something they need to work their way up to but it’s exciting to see them both set that goal for themselves. They’ll get there.”

For Weiss, making conscious efforts to establish family traditions takes powerful resonance. “Growing up, my family didn’t really have any traditions. We weren’t a tight group and my parents didn’t seem to place big value on being together,” he admits. When he met his former wife, Stacey, he saw a completely different approach through her close-knit family who treasured spending time together.

That motivated him to develop a new vision for his own children. “I see how important it is, and now there are certain things sacred to all of us—whether it’s our holidays or new routines we’re starting now. You know with boys, it can be tough to get them talking, tough to get anything out of them. But, when we are doing stuff together, that’s when we have conversations. We’re going to try cooking together once a week when they are at my house and I’m hoping that will be our next new tradition.”

The men of the Singer family look forward to spending more time together each year on their annual post-Thanksgiving fishing trip. “This trip started almost 40 years ago,” Ben Singer recalls. “My dad, Bill, and his brother, my uncle Richard, me, and Richard’s son, Heath, went fishing down in Apalachicola, Florida and fell in love with the area. The next year a cousin went; then a brother-in-law, then other kids and cousins started going. What started out with three or four people can now be as many as 15. It’s grown into a tradition.”

A big tradition. Singer resides in Marietta today, but grew up in Thomaston, Georgia and the annual family Thanksgiving feast still takes place down there with over 50 relatives coming in from all over the country. The next day, the men of the family hit the road for two days at Apalachicola’s Bay City Lodge fishing camp. “There are some guidelines now. Generally speaking, boys must be at least 9 to go, and they cannot wait to be old enough,” Singer says. “Kids realize the importance of the trip and look forward to being included.” On each trip, the guys welcome those joining the crew for the first time by presenting them with a gold hook to attach to their fishing hats. It’s a mark of honor for newbies, but the best treasure is time spent in the boat and what’s pulled up on the lines.

They fish all morning and return back to the docks in the afternoon, cleaning up quickly so they can start watching football. “My dad went to Georgia Tech and uncle Richard went to UGA, so that’s always a fun rivalry on Saturday after fishing. Little things make the trip special. Dad and uncle Richard have created an environment where the only expectation for the trip is to have fun, and everybody does,” Singer assures. “That time out on the boat becomes a safe, comfortable place to start talking. We always draw names out of a hat to see who goes in which boat, and that mixes up the group. Sitting out in the boat together for hours, chatting to pass the time, telling stories and sharing the hope of catching a fish. We fish for speckled trout, sheepshead, flounder and redfish, which have to be a certain regulated size to keep. The kids all want to catch their first ‘keeper’ red on the trip. And of course, we all live for the fish stories.”