The Importance of Making Time for Mom

By David A. Martin 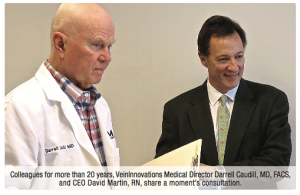 A few questions for Darrell Caudill, MD, FACS, Medical Director of VeinInnovations (VI) from David A. Martin, the Founder and CEO of VI.

I recently caught up with Dr. Caudill at his office in Sandy Springs to ask him some questions about the future of vein treatments. Here’s what he told me:

DM: Dr. Caudill, you’ve been a full-time vein specialist since 2006. In the twelve years since you devoted yourself to this specialty, what changes have you seen?

DC: Surprisingly, most of the changes I’ve seen have not been positive ones. The basic procedures we do have remained more or less the same, with the thermal ablation techniques still the go-to therapies. There have been improvements in laser fibers for instance, with the advent of the radial fiber, which allows for more precise distribution of energy, but the mainstay of therapy remains the radio-frequency catheter that started it all nearly 20 years ago, and hasn’t changed much in the past 15 years or so. The negative changes I have seen involve the many physicians who have decided to treat veins as a sideline, rather than a primary form of practice. These doctors may do an adequate job at the partial treatments they provide, but they cannot provide the same level of care as a primary vein practice such as VI or others.

DM: So, the actual treatment techniques have remained about the same for 15 years? Isn’t that sort of unusual?

DC: Yes, it is a bit unusual for a widely practiced set of procedures to remain relatively unchanged for such a long period of time. This is the case with thermal ablation partly because the procedures were so good to start with that improving them happens only incrementally, in small ways. But that’s not to say we don’t look for improvement constantly. At VI, for example, we have utilized other techniques that don’t require the administration of tumescent anesthesia, which of course the thermal catheters do because of the tremendous heat they generate. Some of these new procedures have involved embolization coils to block the veins, and precisely controlled, ultra-sound guided injections of a new drug called Varithena. These things have shown some promise; the Varithena for example can be safely used in the lower leg without concern for tissue and nerve damage which remains a danger with the thermal devices.

“We have been asked to be the principal investigator for a brand-new procedure that involves a newly invented catheter.” — Darrell Caudill, MD, FACS

DM: So is there anything new on the horizon at VeinInnovations?

DC: Actually there is. We have been asked to be the principal investigator for a brand new procedure that involves a newly invented catheter. Our initial testing of this device was done last year, and we believe it has the promise to be a major advancement in vein treatment as it doesn’t involve heat or any sort of foreign body. It is also painless, and requires no anesthesia of any kind, nor does it require the use of compression stockings after the procedure. Because it uses no heat, it can treat the entire leg safely, and because it requires no anesthesia, more than one leg can be treated at a single session. The hope is that this will ready for general use sometime in the coming year.

Tips To Prevent Back Pain from Gardening

Sleep Apnea: Not Only a Problem for Patients