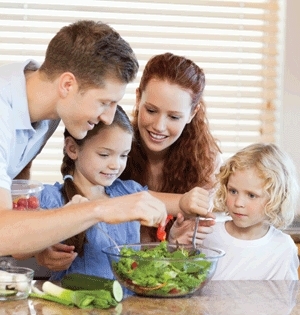 My Best Self: Carden Wyckoff

Though Mom may be the only one in the family to be at risk for an ovarian cancer diagnosis, it has the potential to affect husbands and kids too. Doug Barron and Chase Powell know that firsthand. After women in their lives experienced the disease, they each became dedicated to ovarian cancer awareness.

Barron’s mother-in-law, Wendy Sheron, passed away in 2007 from ovarian cancer. Barron says, “I knew I had to do something.” He joined Georgia Ovarian Cancer Alliance’s board of directors in 2008, becoming executive director in 2010. “Looking back at the time leading up to her being diagnosed brings anger and frustration, which fuels my drive and passion for the GOCA mission. The risks and symptoms were right there in front of us – silent, yet shouting. We just didn’t know what to look for. She is the reason I am so dedicated to educating women of all ages about the risks and symptoms of ovarian cancer.” Barron says his mission, and that of GOCA itself, can be summed up in this phrase: “Until there’s a test, awareness is best.”

Powell’s own mother, Lorraine Powell, sat on the board of directors for Georgia Ovarian Cancer Alliance. She had the disease herself and threw her support behind GOCA because, as she said, “Until people know what ovarian cancer is, no one is going to really put forth the effort in finding a cure.” She focused on education because she herself didn’t know the symptoms until she had the disease. After she passed away, her son Chase became involved with GOCA and is now the program manager of the Georgia Ovarian Cancer Alliance. “I needed to do my part in getting the risks and symptoms of ovarian cancer out to the public,” he says.

A crucial but often ignored aspect of family health is Mom’s mental health. According to the Centers for Disease Control, as many as 20 percent of women who give birth each year in America show symptoms of postpartum depression, which can include everything from insomnia and irritability to feelings of shame and severe mood swings. To help dispel some myths about postpartum mental health, we asked Dr. Toby Goldsmith, the director of Emory’s Women’s Mental Health Program, to weigh in.

MYTH: Most women get the “baby blues.” New moms should just deal with it themselves, and it will go away.
Sometimes mood swings, anxiety and irritability persist and worsen after the first two weeks post delivery. Dr. Goldsmith says, “After that 14-day mark, a woman should for the most part return to her previous functioning. If she does not return to ‘normal,’ then reaching out for help is appropriate.If a woman has thoughts about harming herself or someone else, we have moved well beyond the realm of the baby blues, and she needs immediate help.”

MYTH: New moms can just “snap out of it” if they try hard enough.
Dr. Goldsmith says, “I believe that’s the number one misconception.” In reality, she explains, it’s “a strong support network” that helps get women past postpartum depression, not the mom white-knuckling through it alone. “Having people to help you, to answer questions and to remind you to take a nap can be vital to feeling well.” Beyond that support, Dr. Goldsmith adds, “Medication and therapy have been shown to be very beneficial.”

MYTH: New moms shouldn’t share their experiences.
On the contrary, Dr. Goldsmith says, talking about the experience of postpartum depression can be a huge help. “Say it out loud,” she encourages. “Reach out to your obstetrician or midwife. Often they can get the ball rolling with treatment.” She also recommends taking to social media to connect. “There is an amazing blog called Postpartum Progress, and Postpartum Support International has a very active Facebook page. Women can get support any time of the day or night with these tools.”

If you’ve got a creaky knee or a shoulder giving you trouble, you’re not alone. Dr. Nathan Jove, an orthopedic surgeon at DeKalb Medical, answered your most pressing joint replacement questions so you can get back to moving and living how you really want to.

My knee/hip/shoulder has been painful for a while now, but I’m not ready for surgery yet. What non-surgical treatments are there for joint pain?
Currently, treatments that are strongly supported by the American Academy of Orthopaedic Surgeons (AAOS) include physical therapy, weight loss, cortisone (steroid) injections and non-steroidal anti-inflammatory drugs (NSAIDs).

I’m in pain and open to the idea of surgery. Should I dive right in?
In order to have a joint replacement, you usually must first try physical therapy, anti-inflammatories and some forms of injections to have insurance approve it. In the end, a joint replacement is for when you can’t do the things you want to do on a daily basis. If you want to walk two miles per day but walk 200 feet then stop because of pain, and if your knee hurts constantly to the point where you’re willing to undergo surgery to fix it, you are probably the best candidate.

Am I too old to have a joint replacement surgery?
If a person can’t do the things he or she wants to because of joint problems, age should not be a deterring factor. I have done a joint replacement in someone under 25 years old and another in someone over the age of 95. We are performing surgery in older patients more frequently, with better anesthetics, and with better pre-surgical and postsurgical management by medical doctors. Thus we are having safer and better outcomes for those older than 80.

How long will a replacement joint last?
Many people think the surgical components don’t last a long time after surgery. The good news, however, is that components are lasting longer. We have 15 to 17 years of data with over 90 percent satisfaction, and with the higher-end materials, we are expecting components to last longer than ever. These new advances in materials, including vitamin E plastics and ceramics, are the most promising surfaces for long-term implant survival, and DeKalb Medical is at the forefront of letting their surgeons use these.

What are the pros and cons of joint replacement?
The cons or main concerns related to the surgery are blood clots and blood clots that travel to the lung called pulmonary emboli. For this, we have all patients on blood thinners in the post-operative period. We are concerned with infection as well, which is why we place all patients on antibiotics prior to surgery and continue it for 24 hours after surgery. The pros are restored mobility, decreased pain, less stiffness, better motion, ability to walk longer distances and patients feeling like they no longer have to limp because of pain.

Believe It
Though it might seem hard to believe, prostate cancer is the second leading cause of cancer deaths in males. Dr. Miller says prostate cancer numbers are “similar to those for breast cancer.”

Test It
In early stages, prostate cancer doesn’t usually cause symptoms. Sometimes, though, men will experience difficulty emptying their bladder and other urinary symptoms. “Once prostate cancer symptoms develop, it becomes very difficult to cure,” Dr. Miller says, so it’s crucial to get tested regularly, especially for older men, African American men and men with a family history of the disease. He recommends a baseline PSA (prostate specific antigen) test every year, but the age at which men first start the test is between him and his doctor.

Treat It
“Prostate cancer treatment has radically improved in the last decade,” Dr. Miller says. “Highly precise robotic surgical removal techniques continue to evolve to lower the chance of side effects. For cancer that has spread outside of the prostate, we now have advanced drugs that can specifically target the prostate cancer cells using newer hormone-manipulating techniques or one’s own immune system.”

The Importance of Vaccinations

From infancy into their later school years, children can achieve good overall health with vaccines as part of their checkups. According to Dr. Sam Gold, the chair of WellStar Medical Group’s pediatric committee on safety and quality, “The goal of vaccination is to prevent serious illnesses that are known to put children at dire risk of major illness, such as meningitis, developmental delay, deafness and even death.”

In recent decades some people have had a persistent, yet scientifically inaccurate, fear of a link between vaccines and autism and other issues, but Dr. Gold assures his patients, “Vaccination has been shown time and again by many different scientific and medical groups to be very safe.” Without vaccinations, Dr. Gold points out, “Outbreaks can and do happen, as has been seen within the last year with measles in more than half the states in the country, as well as whooping cough.”
For these reasons, it’s key to stay up to date on all appropriate vaccinations to keep your children, your family and your community-at-large as healthy as possible.