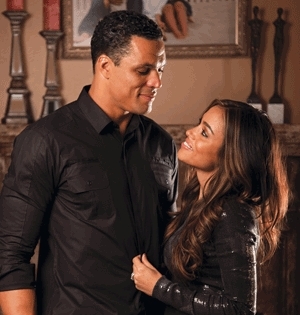 The Importance of Spiritual Health

For Atlanta Falcons tight end Tony Gonzalez and his wife, October, the NFL is just the beginning of their very big life. This couple has used their celebrity status to bring attention to a number of causes and organizations that are close to their hearts, and through it all, they’ve managed to put family first. Now that Tony’s football career is coming to a close, they have big plans for their next chapter.

According to Livestrong.com, the average career of an NFL player is 3.3 years, yet Tony Gonzalez is still thriving in his sixteenth season. So what does he credit his longevity to in this sport? “A lot of it is luck,” he says. “I’m making sure that I’m always working out, preparing my body to go out there and do this for a living. I make sure I’m stretching out, recovering the right way, hydrating the right way, getting enough rest and putting good food in my body. This is why I’ve played at such a high level for the last five years.”

Tony began his career in 1997 with the Kansas City Chiefs, and by the 2008 season, he became the NFL’s all-time leader in reception yards for a tight end. In 2010 he was traded to the Atlanta Falcons and quickly became the 21st player and the first tight end in NFL history with 11,000 receiving yards. With his contract set to expire at the end of the 2011 season, Tony decided to sign a one year extension with the Falcons to return for one final season.

Today, at 36 years old, he is mindful of the physical changes in his body and is careful to maintain it to the best of his ability. “You have to know that you can’t do it the same way you did the year before,” he says. “Now I’m getting older, so I make sure I get my rest. I’m constantly trying to figure out my body, make good decisions and avoid hard injuries on the football field.”

Married since 2007, Tony and October are the proud parents of 4-year-old Malia and 2-year-old River, as well as Tony’s 11-year-old son Nikko from a previous relationship. “My family is my greatest accomplishment,” Tony says. “When you’re a kid growing up, you think you’ll get married and have kids, but when you get older you realize how hard it is to do that successfully.”

For the last few years, the Gonzalez family has split their time between California and Atlanta, where they live during the football season. Being bi-coastal certainly has its challenges, but this couple has learned to make it work. “It just becomes a way of life for us,” October says. “I’ve adapted to this lifestyle, and the kids adapt as well as we do. We were both born and raised in southern California, so we definitely have more friends and family out there, but we love Atlanta because it’s an opportunity for us to grow closer as a family.”

And no matter where they’re living, Tony and October make their relationship with each other their number one priority. “We have a date night every week,” Tony says. “With three kids, we made a vow to keep each other first. If you don’t have a strong relationship with each other, the kids can see that. If we take care of each other emotionally, we can take better care of our kids emotionally.”
They’re also careful not to take anything too seriously. “We get over things easily,” October says. “We don’t keep score of who does what, and we keep it light and laugh a lot.”

“We have Sunday dinner every week during off season,” Tony says. “I grew up doing this, getting together with all of the extended family. Everyone brings their kids and their dogs and we cook all day Sunday. It’s my favorite thing to do in the whole world.”

Growing up in a single parent household, Tony remains especially close to his mother and older brother. “They are the ones who are going to tell me the truth, and they keep me in check,” he says. “You need people in your life like that. When you get thrown into the limelight at such a young age, you need people around you who aren’t just saying yes. They always have my best interest at heart.”

October, on the other hand, had a childhood that she calls “anything but normal.” After years of moving from place to place and living with various relatives, giving her children a solid foundation is her top priority. “My children and my family are my greatest accomplishments,” she says. “I had a very chaotic childhood, so having a healthy, normal family is a big deal for me.”

After suffering a bout of Bell’s Palsy (a form of facial paralysis) in 2007, Tony shifted his attitude toward health and wellness. “It was a big health scare – we thought it could be meningitis or a stroke,” he says. “But it was a blessing in disguise, and a life lesson that taught me to stay in the moment and enjoy what I’ve got now.”

It also made him re-examine his eating habits and experiment with a vegan diet. “If you change your diet, you can reduce the risk of so many diseases,” he says. “The benefit that [the vegan diet] has given me is one of the reasons I’ve been able to stick around in the NFL for as long as I have.”

Tony became such a proponent of this new way of eating that he was inspired to co-author the book “The All-Pro Diet” in 2009. “It’s not just about eating right, it’s about why,” he says. “You don’t have to be an athlete to eat this way. I tell people to just try the diet out. You’ll see how much better you feel, how much more energy you have and how much faster you recover.”

While he still follows many principles of the vegan diet, Tony incorporated meat back into his diet when he realized that it was better for his performance on the field. But he is careful to only eat free-range chicken and grass-fed beef, and sticks to organic fruits and vegetables. “You don’t have to sacrifice taste to eat right,” he says. “I’m not saying don’t eat meat – just limit it and make sure it comes from a good source.”

Tony and October try to encourage good eating habits at home as well. “I put broccoli on pizza and make smoothies for the kids,” Tony says. “It’s stuff they would never eat alone like kale, but mix it with strawberries and apples and they love it. They’re getting all their fruits and vegetables, and they see me drinking it too.”

For Tony, the benefits of giving kids a healthy start is two-fold. “I’m passionate about childhood obesity because so many of these problems can be solved if we develop healthy eating habits at a young age,” he says. “I also saw the benefits from [this diet], and I just know I feel really good when I do it. I’ll never go back to fast food and soda because of the way it made me feel.”

Philanthropy is another big part of the Gonzalez’s lives, and they make time for a number of organizations close to their hearts. “I’m involved with the Boys and Girls Club because I grew up attending it,” Tony says. “I give kids tickets to games, and I’m big into the health and wellness part of things and getting kids active.”

Since his rookie year, Tony has been involved with the Shadow Buddies Foundation, which works with sick children in a number of hospitals including Children’s Healthcare of Atlanta. “I wanted to be a part of a charity, and I wanted to work with kids, so this encompassed everything,” he says. “My mother’s background is in nursing home care and I grew up watching her. It was my first and only job besides football.” October donates her time to Shadow Buddies as well; this fall, she hosted a “Pink Party” at Children’s Healthcare of Atlanta that honored teen girls battling cancer.

The couple is also active with PETA, and in 2009 they posed for the “we’d rather go naked than wear fur” campaign. “It was based on (preventing) animal cruelty,” October says. “It’s a message that we apply to many areas of our lives. If you must eat meat, get it grass-fed and eat cage-free eggs. It’s a much more humane way to eat on a daily basis.”

With Tony’s football career coming to an end, the Gonzalez family is looking forward to their next chapter. “We’re planning to split our time between California and Europe,” October says. “We want to expose our children to different cultures, and learning a different language is important to us. It’s important for our children to speak Spanish, so we’re going to Spain for two months this summer to immerse ourselves in culture.”

As for Tony, he may be hanging up his cleats, but he has no plans to slow down. “I hope I’ll be sitting at a desk talking about the games on the weekends,” he says. “I’ll probably travel a bit more, taking the health and wellness message on the road. I’m also on the government council in California so I’ll be going around to schools giving lectures on how to get kids healthy.”

But no matter what, this couple will always do what’s in the best interest of their family. “So far, we have built a really successful family,” Tony says. “Our close family and friends are such a blessing, and we’re so thankful to be surrounded by them.”

October, how did you and Tony meet?
I was 21 and working at a bar owned by Dennis Rodman in Newport Beach. Tony came in and invited my then-boyfriend and me to a party but I said no. A year later, he found out I was single and drove down to Orange County to see me, and the rest is history.

What is something that our readers would be surprised to learn about you?
I grew up singing my whole life. I’m a good impersonator – I’m a total a goofball.

What is one of your wildest dreams?
My dream job would be a sketch comedy artist on Saturday Night Live.

What is your favorite way to spend “me” time?
With two young kids, it’s hard to find a lot of time for myself, but I’ve recently taken up tennis.

Who are the people in your life you help you to be your best self?
My mother-in-law bears a lot of the qualities that I hope I can adopt. She’s a wonderful lady, very open and honest, almost to a fault. And my best friend’s mom has been like my mom since I was 16. They are polar opposites of each other, but whatever I lack from one I get from the other