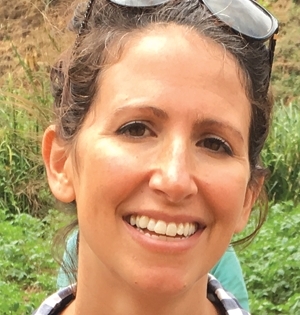 2019 OVER 40 & FABULOUS! ADVISORY BOARD: Hair and Makeup—Nyssa Green

As a bright-eyed College of Charleston graduate, Sarah Koch didn’t know what she was getting herself into when she applied for the Peace Corps. It was 2004, and she wanted a change of pace and scenery that a more traditional graduate school route couldn’t provide. Koch had two choices in front of her: continue on to a Ph.D. program to pursue her art history endeavors or choose a different path. She opted for the latter. Little did she know, her choice would change her life forever. 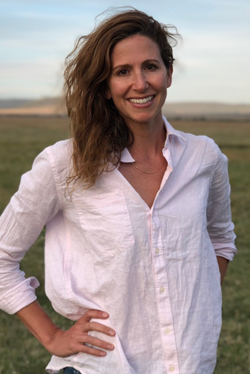 In 2005, Koch was sent to Senegal in West Africa to work in rural health education in a village 13 hours from the capital of Dakar. She recalls, “I lived in a village that had no cellphone service, no phone, no electricity, and no running water. I really had to confront a lot of my notions of comfort, and who I was. I had gone into the Peace Corps thinking, ‘This is just going to be a fun experience.’ And I pretty quickly realized that’s not what this is about.”

As she trudged through an unfamiliar landscape and culture, Koch felt herself changing. “As I stayed there, it slowly wore on me—in both good and bad ways—and shifted what I wanted to do. It became an opportunity. It shaped how I was going to move forward with my life and my career.”

Eventually, Koch connected with Steve Bolinger, another Peace Corps volunteer. Bolinger was stationed in Dakar working on urban agriculture. On her rare visits to the city, Koch would find herself lending a hand. “Steve was building this garden for the Infectious Disease ward, which had been experiencing a significant challenge where they couldn’t get their HIV patients to maintain their antiretroviral drugs,” she explains. “Because the drugs are so physically hard on their bodies, nutrition is a critical component to their well-being.” The garden became an integral part of the hospital’s success. Bolinger’s garden flooded the kitchen with fresh, healthy produce, and patients were able to improve their diets and therefore, their ability to absorb their medications.

Something clicked in Bolinger and Koch. The pair realized replicating the garden elsewhere could potentially have long-lasting, far-reaching impacts. Development in Gardening, aptly known as DIG, was born in 2006.

The Atlanta-headquartered nonprofit works with African communities to teach local residents how to produce working, sustainable, income-generating gardens. Koch explains, “We talk about cultivating the land, growing produce for their unique nutritional vulnerability, how they can incorporate that produce into their diet, how that food is affecting their health, the impact it’s having on their bodies, how that food can be used to generate additional income, and how to manage that income for the betterment of their families.”

The idea is that through farming, a practice that is already generationally familiar and ingrained in day-to-day life, the participants will improve their health, their knowledge, and their income. “We’re just trying to help them shift to more sustainable long-term practices,” says Koch. Today, DIG’s mission has expanded beyond a strictly HIV focus to bring other people with nutritional vulnerabilities into its fold. The 37-year-old says, “Nutritional vulnerabilities are defined by people who have a heightened need to maintain a nutrient-dense diet. We work a lot with children who have been diagnosed as malnourished, and we still work a lot with people who are HIV positive.”
DIG has also held projects in nine nations. This year, the group is continuing their mission in Kenya and Uganda, where in 2018 they worked with 760 beneficiaries through 12 demonstration gardens in Kenya and 170 farmers from 16 groups in Uganda.

Koch Continues Her Work with DIG

While Bolinger has since stepped into an advisory role, Koch continues her work with DIG today as the executive director. Her staff, small but mighty, includes two
full-time and two part-time team members in the United States, seven full-time Kenyans in Kenya and six full-time Ugandans in Uganda, and the results of their hard work and dedication are incredible. The organization found that a year after “graduating” from the program, on average, a family who was spending roughly $4 a week on food before DIG programming, cut their spending to 40 cents after it. Further, many more than tripled their income by shifting their farming to grow a variety of unique, nutritious produce instead of simply relying on common, familiar crops like sugarcane. Koch says that impact is all about broadening horizons. “They now know how to grow for the market, access the market, and save and utilize that income to help continue their farm and their farming activities.” 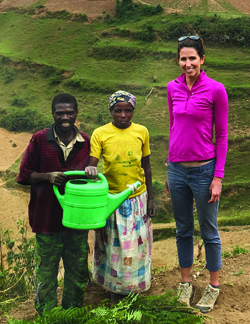 Perhaps the biggest impact, however, is DIG’s community cultivation, particularly for people coping with an often stigmatized disease. “We worked with several HIV groups in Senegal who were not at all open about their HIV status,” Koch explains. “And that farm or that garden was the only place in their daily life that they could go and actually talk about what it’s like to live with HIV.”

As DIG grows, Koch, who resides in Grant Park, says she desires to replicate the program in many communities—even right here in Atlanta. “My hope is that we can create a scalable model that can be taken anywhere in the world, and anybody could ask us [about it], and it would make sense. My immediate dream is to have centers of excellence in Kenya, Uganda and Senegal where if you want to see our program in its full, robust quality, you could go there and see that. You could understand what’s possible with our program.” And with DIG, the possibilities of hope and impact are endless.