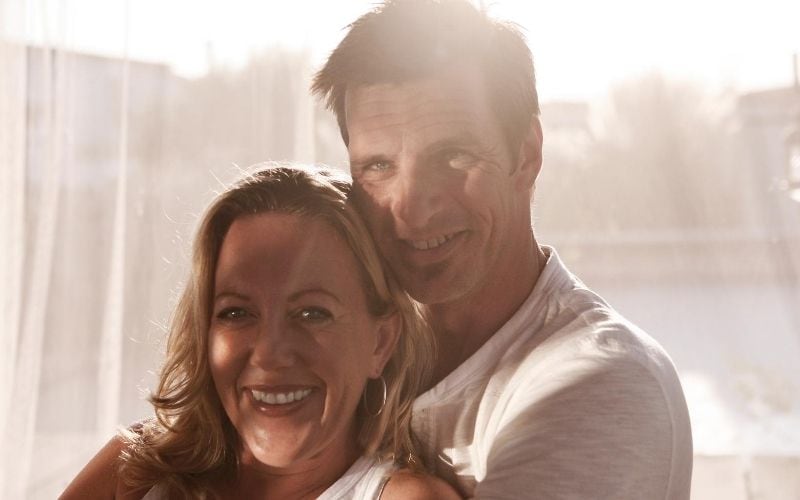 Between children, exes, careers and the various other intricacies of life for many after 40, dating might seem to be a much more complicated undertaking than it is for the 20-something set. While in many ways it is, in other ways it can be vastly simpler.

“At this stage in life, we would rather be alone for the right reasons than be together for the wrong,” says radio personality Bert Weiss, 50, of The Bert Show on Q100. “I enjoy being alone now and enjoy it more than I did when I was younger. And it’s much easier when you get older to identify when you have a connection with someone and when you don’t.”

Elke Koscher, in her 40s, agrees that the assuredness about what she wants at this phase of her life brings the benefit of a certain clarity to the dating process.

“I am not completing anybody, and I don’t need anybody to complete me,” she says. “I am complete in myself. I work on myself to be the best person I can be. I’m attracted to a man who is a whole person, who has his life together, and who I can have a conversation with on many levels.”

Phillip Horge, 58, adds that knowing exactly what is most important to him in a relationship helps him avoid wasting time dating those who are not a match. “I can figure out quickly if we are going any further. I am looking for someone with things in common with me; someone like-minded. I’m looking for more substance than I might have in the past,” he says. 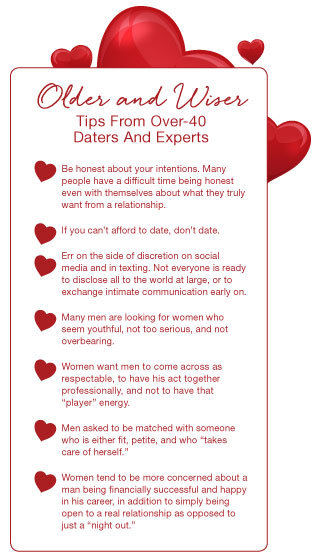 While the online dating option can seem appealing and convenient, it can quickly lose its luster if those on the other end of the messages have a different end result in mind or are representing themselves in a not-so-accurate manner. Horge says he encountered some off-putting misrepresentation when he tried using Tinder, and he prefers a more straightforward and honest personal approach. “Texting and online stuff doesn’t really appeal to me. I meet people mostly through friends now,” he says. He adds that dining at the bar in a restaurant also opens up opportunities to connect with and get to know people he might not otherwise meet.

Harp says online dating was not a fit for her, and she says she has been enjoying reconnecting with people she knew from college. Exploring the familiarity of the connections while learning about who they have become over the years has been rewarding, she says.

Weiss says he doesn’t feel the discomfort with dating—online or otherwise—that many seem to. “I’ve always enjoyed going out and getting to know someone,” he says. “Online dating is becoming the new restaurant, the new bar … but there is a generational difference and just ‘hooking up’ doesn’t really fit anymore in your 40s. As you get older, you realize it’s time for connection and not just something physical.”

For many, Weiss points out, juggling the responsibilities of being a parent can add challenges to dating. Flexibility on everyone’s part helps tremendously, he says. “It can be hard to balance between work, trying to stay connected with friends, dating, and being a parent. Most times I just feel mediocre at all of it. You can feel so stretched.”

His advice to anyone taking on the dating scene after 40 is to stay open and avoid setting concrete expectations. “Don’t make judgments on how you’re going to feel about relationships for a while and live by your own truth. Everybody is so different and is coming from different backgrounds, and what’s going to work for me isn’t going to work for the next person,” he says.

Meredith Davis, head of communications for The League dating app, says the average number of messages that users over 40 send before going on a  date is around 24 versus 14 sent by millennials. “They tend to want to get to know each other a bit longer before taking it off the app,” she says.

According to Davis, those who widen the range of ages they will date and distance they will travel to meet up, tend to have greater success finding matches. She also recommends using more than one dating app to broaden your scope and expand your circles. “People get into routines: you go to work, you have your curated communities, and the apps add a new community to your life,” she says.

As a general rule, Davis says, people over 40 take a more “traditional” approach to dating and are looking for a partner with a similar culture and upbringing.

She adds that the fact that many people who are in the second half of their lives have already been married and have kids, which can free them up to now look for a partnership that fulfills them personally. “The person you are looking for in your 40s is probably not the person you were looking for in your 20s. You can most likely forget about the things you thought about when you were starting a family and be a little more greedy about doing what excites you and what you love,” she says.

Jennifer Miotke, president of One on One Matchmaking, however, points out that some people over 40 are in fact looking to start a family. “The ones that already have a family look for different things,” she says. “I think financial stability and being a reliable person is more important to people over 40. The 20s and 30s are oftentimes more focused on looks and if the person is fun.”

“If a man has not had kids and is in his 40s, he typically wants to date a woman 37 and under so he can hopefully have children … on his timeline. If you are a woman in her 40s with kids, just make sure the man you are dating does not want more kids if you are done,” Miotke adds.

Beth Shapiro Friedman, who with Jenna Leopold Shulman runs juLuv matchmaking service, says being financially independent later in life is important when dating. “Usually, if the person has children, they are looking for someone who has kids in the same age range and someone who is not looking for financial dependence,” she says. “At this stage of life especially, no one wants to take on more financial responsibility.”

While Friedman says many of those who have been through painful divorces are looking for someone who is nothing like their ex, those who have never been married can often be even less flexible and forgiving. “Typically, these individuals have a mental checklist (sometimes an actual checklist!) of certain criteria and they are not willing to make any exceptions,” she says. “For example, any potential date must be a certain height, have a fit physique, an admirable profession, and similar religious beliefs.”

“Those who have been married before are usually willing to overlook certain things and are more flexible when it comes to finding a partner. They have already experienced the ‘perfect’ mate changing, whether it be their physical appearance or attitude/beliefs, so they understand that there are no guarantees or certainties when it comes to the future—if it looks too good to be true, it probably is!”

Friedman says she and Shulman have helped people who have unique challenges, such as alopecia or Asperger’s syndrome, enter the dating arena. “We just try to encourage people to be open and candid about themselves and the issues they are dealing with. Nothing is worse than trying to hide these things from potential dates. My counseling background comes in handy because I really try to understand and help our clients with self-acceptance and being honest about who they are.”

Lisa Lyngos, along with Leisha Murphy, owners of Single Atlanta Matchmakers, says she uses her intuition and understanding of the whole individual when she is matchmaking, helping people understand that the dating process is an exercise in authenticity within oneself. Through full acceptance of self—even the parts we tend to hide—“you find a loving place to be a better soul,” she says, which is a beautiful thing in any relationship.

To anyone feeling like over 40 is “too old” to enjoy dating, Miotke says the truth is quite the opposite. “It’s not old, it’s fabulous! I love this age. I’m 41 and am in better shape than I was in my 20s, feel more confident sexually (40s is a woman’s sexual peak) and have settled into my career,” she says. “It’s a great age, so if you think it is old, or a totally different era, I beg to differ!”