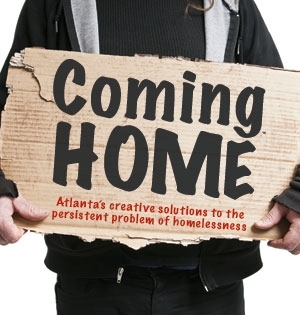 Find Your Fitness Focus for 2015

The word “homeless” may conjure images of people panhandling on the street, but in reality, the problem of homelessness can look very different. Those who are technically homeless may actually be living in a shelter or a transitional program. They may only be homeless for a short period of time. Surprisingly often, people experiencing homelessness are also employed but simply not earning enough to cover their basic expenses.

According to the National Alliance to End Homelessness, there are approximately 600,000 people experiencing homelessness on any given night in the United States. In Atlanta alone, that number is more than 10,000, with more than 40 percent being women and children. But several Atlanta organizations and charities are coming up with creative solutions, helping these individuals and families get back on their feet, and challenging people’s perceptions along the way.

As with any difficult situation, people have a tendency to assume, “That could never happen to me.” But take a closer look at the common causes of homelessness: domestic violence, illness, substance abuse, traumatic backgrounds and even jobs that simply don’t pay a living wage. These make it clear that sometimes the circumstances just overwhelm an individual or family and make rent or mortgage payments impossible, whether temporarily or for longer periods.

Deborah Walker-Little, the executive director of Interfaith Outreach Home (IOH), says, “Domestic violence is the greatest cause of homelessness for women and children,” often because violent situations require slipping out in the night without many belongings. Mandy Putnam, director of communications and corporate relations at Back on My Feet Atlanta, adds, “We see a lot of people with military backgrounds and PTSD, and a lot of substance abuse. Many have relationship issues or illnesses like cancer. We had one man who left his job to take care of his sick wife, but the medical expenses got to be too much.”

Many people who can’t afford housing are, in fact, working. As of 2014, Georgia remains one of only four states with minimum wage rates under the federal rate of $7.25 an hour. Georgia’s minimum wage is $5.15 an hour, and according to the U.S. Census Bureau, 9.2 percent of Georgians are living in poverty. “You’d be surprised by who is homeless,” Walker-Little says. “It could be the woman sitting in the cubicle next to you at work. It’s people who work at jobs that you would not think would be spending their nights in cars. It impacts a whole lot of folks – people who look normal in every other aspect.”

Hard as it may be to believe, a recent report from the Committee for Better Banks stated that one-third of all bank tellers are on public assistance. An average teller at Wells Fargo makes less than $11 an hour, or about $22,600 a year. While that’s above the federally mandated minimum wage, it’s also low enough to qualify a family of four for food stamps. 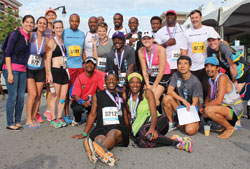 A problem like homelessness, which has such varied causes and affects so many people, requires creative solutions. Atlanta groups are taking notice and tackling homelessness through unconventional tactics. Back on My Feet connects with and supports the homeless community through running. “Our mission is to use running to create self-sufficiency in the lives of those experiencing homelessness,” Putnam explains. The organization partners with local shelters and refuges such as City of Refuge, Gateway Center, Salvation Army and Trinity House in order to connect with homeless Atlantans. Once they have found interested participants, Putnam says, the running begins. For each participant, running helps foster independence, accountability, health and pride in their success. “It’s a first step to getting them housed, employed or in some educational training.” Plus, it’s an elegant metaphor for life: you have to keep moving forward, one step at a time, to meet your goals and cross the finish line.

The Task Force for the Homeless at Peachtree-Pine takes a different approach; they offer their residents new opportunities through an organic rooftop garden. In partnership with Truly Living Well, an urban farming center and training facility, the Task Force’s resident volunteers grow a variety of crops in 90 raised beds. This garden gives their residents a chance to enjoy green space, to take ownership of choosing and preparing their food, and to reap the health benefits of fresh,

organic produce. In addition to those benefits, a specially funded program prepares these resident volunteers for entrepreneurial farming and marketing. After six months, that same program certifies them to train other urban farmers at Our Community at Peachtree-Pine, passing on their newfound knowledge and skills and empowering others just as they themselves were empowered.

Mercy Care has gotten creative with their approach as well. “Recently we created a flash mob of Mercy Care employees in Downtown Atlanta to bring attention to the need for Medicaid expansion,” says Kenya Arnold, a case manager for Mercy Care. “Mercy Care also has mobile medical coaches that go into the hardest hit areas, providing free care and other valuable services. [We] also reach those in need through night street medicine outreach events and early morning outreach at Hartsfield-Jackson Airport with collaborative partners.”

Nothing proves the value of these organizations’ work more than getting to know Atlantans who have benefited from their support. Meet these three who received the support they needed and are building the lives they want. 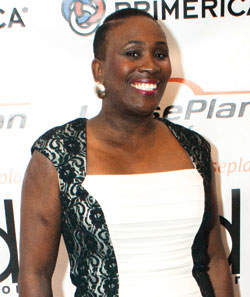 As a single mother working part-time at an Atlanta hotel, Thomasine Mungo was not getting enough hours to generate the income needed to pay her rent. Eventually, eviction led to homelessness for Mungo and her three children in the winter of 2011. When a local homeless provider referred her to the Atlanta Children’s Shelter (ACS), she received free early childcare for her two-year-old son and joined the ACS Hire Up program, which ultimately led to a position as a community health worker at an Atlanta health provider. By March 2013 she moved her family into permanent housing, and by October 2013, she became one of only 100 peer specialists certified in the state of Georgia. Today Mungo has plans to earn a degree in social work. “I have put into practice much of what has been suggested to me by the staff at ACS,” she says. “The encouragement and advice has proven to be invaluable to me in my recovery. Knowing that someone truly is there for me has made a tangible difference in my life.”

James Geary spent years jumping from one job to another until the economic decline hit Atlanta. “By the time I did find employment, I’d lost my room, possessions and happy-go-lucky attitude,” he says. “It was a serious wake-up call.” The second time he became homeless was due to drinking and bereavement. “I just couldn’t pull myself together,” he says. “It was during that time I was hit by a car.” Following the accident, Geary was taken to Grady Hospital with a number of fractures and broken bones that would require surgery. While recuperating at Grady, a nurse from Mercy Care encouraged him to take advantage of their Recuperative Care Program at the Gateway Center, which exists for sick or injured patients who are medically well enough to be discharged from the hospital but who don’t have a home in which to recover. After a few months in recuperative care, Geary was transferred to the Veteran’s Transitional Housing Program (VTHP), where he is still recuperating and building up his physical endurance. “I’m not going to hold my breath waiting on a disability check,” he says. “If I can work, then I will work.” 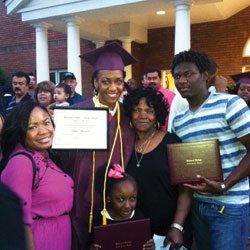 After her divorce, Corliz Sidwell chose to avoid more fighting by giving her ex everything and starting over, which led her into homelessness. Thankfully a friend at her church told her about IOH. “The life skills program they offered taught me how to save and manage money,” she says. “IOH is a place that fills you with hope. It inspired me to continue on and give back.” After graduating the program, Sidwell graduated magna cum laude with degrees in both medical office administration and medical assisting from Gwinnett College. Today she lives in Sandy Springs and works as a clinical research assistant at Infectious Disease Specialists of Atlanta.

As these stories show, the most important fact to recognize is that people experiencing homelessness are just that – people. They deserve support and encouragement through difficult times, which you can help provide. And anyone who gets involved in support efforts quickly recognizes, Arnold says, “There is no great dividing line between themselves and those experiencing homelessness.”