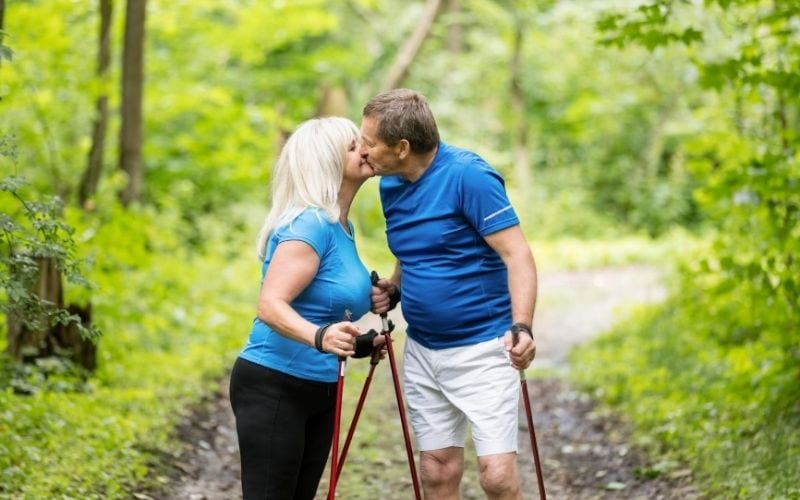 Sex—and certainly the fun, freeing, and fulfilling kind—is typically thought of as the domain of the young. But once the fog of conditioned limiting perceptions is cleared out of the way, the exciting truth is revealed: Sex actually gets better with age.

Because youth can also come with preoccupations about appearance and the imagined perceptions of others, as well as the complicated layers of still budding emotional and spiritual identities, sex can be less enjoyable before age 40 than after. The saying, “youth is wasted on the young” certainly does not apply in this case, since many of the things that make sex most enjoyable are more easily tapped into with maturity.

Elaine Wilco, MA, LPC, founder of IntimacyAtlanta, is a therapist who helps couples reconnect with each other and their own sexuality. She says couples who are actively enjoying sex in their 70s actually report having greater satisfaction than earlier in life. This is because they learn to enjoy sex beyond the previous mental constraints and beyond the traditional physical perceptions of sex itself.

“They know how to enjoy each other in different ways, and that arousal is not just physical. They have learned to create more sexual pleasure by working together,” she says. According to Wilco, there is an entire paradigm shift that can happen later anytime in life around sex. This shift expands the possibilities of how expansively sex can be enjoyed. The perceptions of physicality, self, family, priorities and more change dramatically with the metamorphosis that can happen later in life. 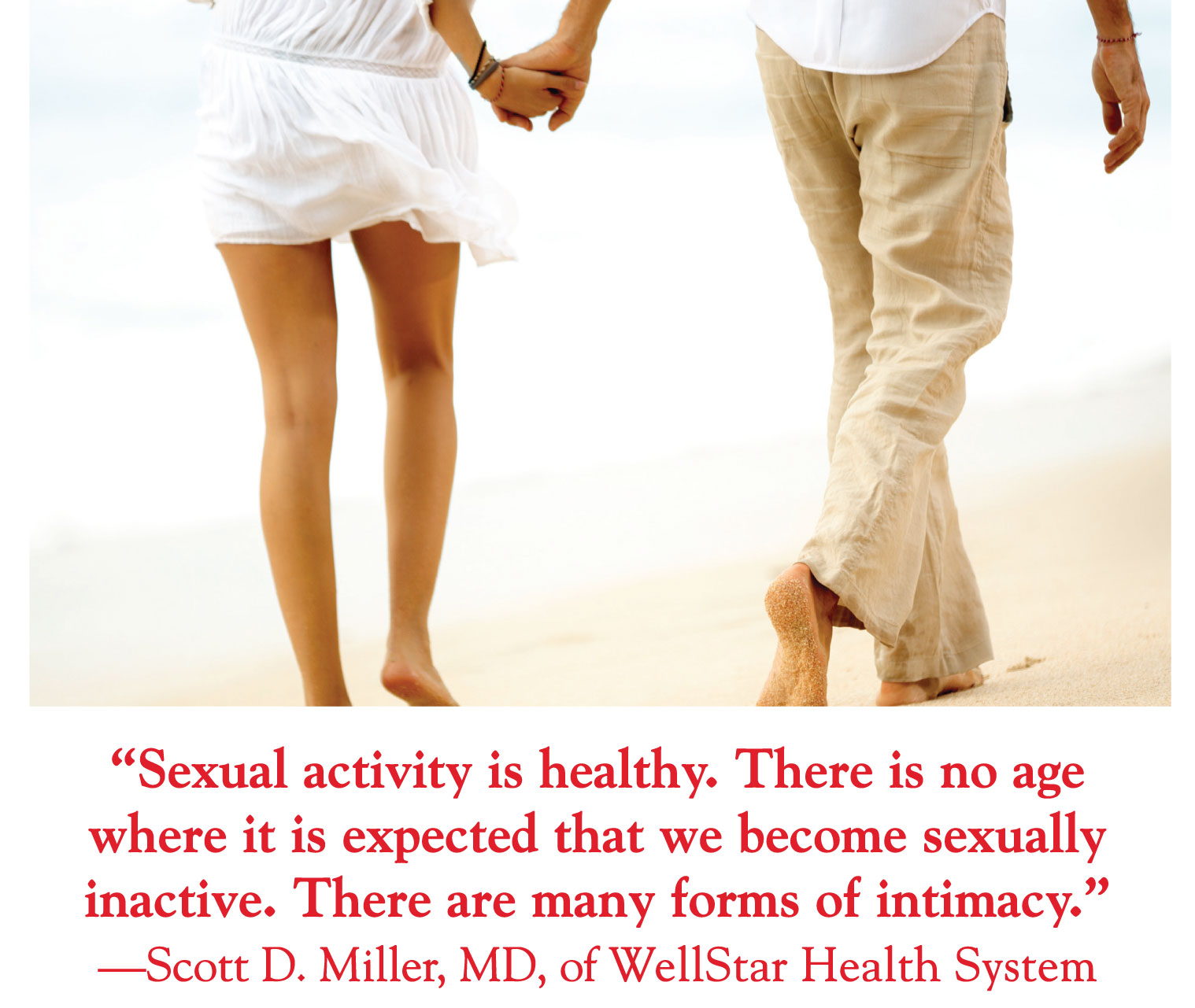 Urology and urologic laparoscopy specialist Scott D. Miller, MD, of WellStar Health System, explains that allowing declining hormone levels and other factors to detract from your sex life can become a vicious cycle. “While stress and depression can take away the desire to have sex, one of the benefits of an active sex life is that it can reduce stress and depression,” Miller says.

Adding, “Sexual activity is healthy. There is no age where it is expected that we become sexually inactive. There are many forms of intimacy, and it is part of who we are as humans and couples.”

For men, Miller says, the drop in testosterone levels that occurs naturally and steadily with time can present challenges. Erectile functionality can become less dependable, which can create anxiety around the idea of having sex. This is especially true if the emphasis is primarily around penis-vagina intercourse.

“The ‘performance’ concept is a lot of pressure on men,” Wilco says. Adding that the pressure to perform can cause men to withdraw from sex into themselves and feel like they have failed their partners, although most don’t actually verbalize these feelings. This can lead to the partner feeling hurt or thinking the man no longer finds her attractive.

Another reason it can be important to expand the idea of what constitutes having sex is that women’s bodies change physiologically after menopause. The thinning of the vaginal walls and reduced lubrication can lead to tearing and irritation. And because the vagina becomes spongier and extends during arousal, Wilco explains, artificial lubrication is not always enough. “There can be too much emphasis on intercourse and not enough on everything else,” Wilco says. “Manual and oral sex are not just ‘foreplay;’ I call them ‘outercourse,’ which includes all forms of sex not restricted to intercourse.” 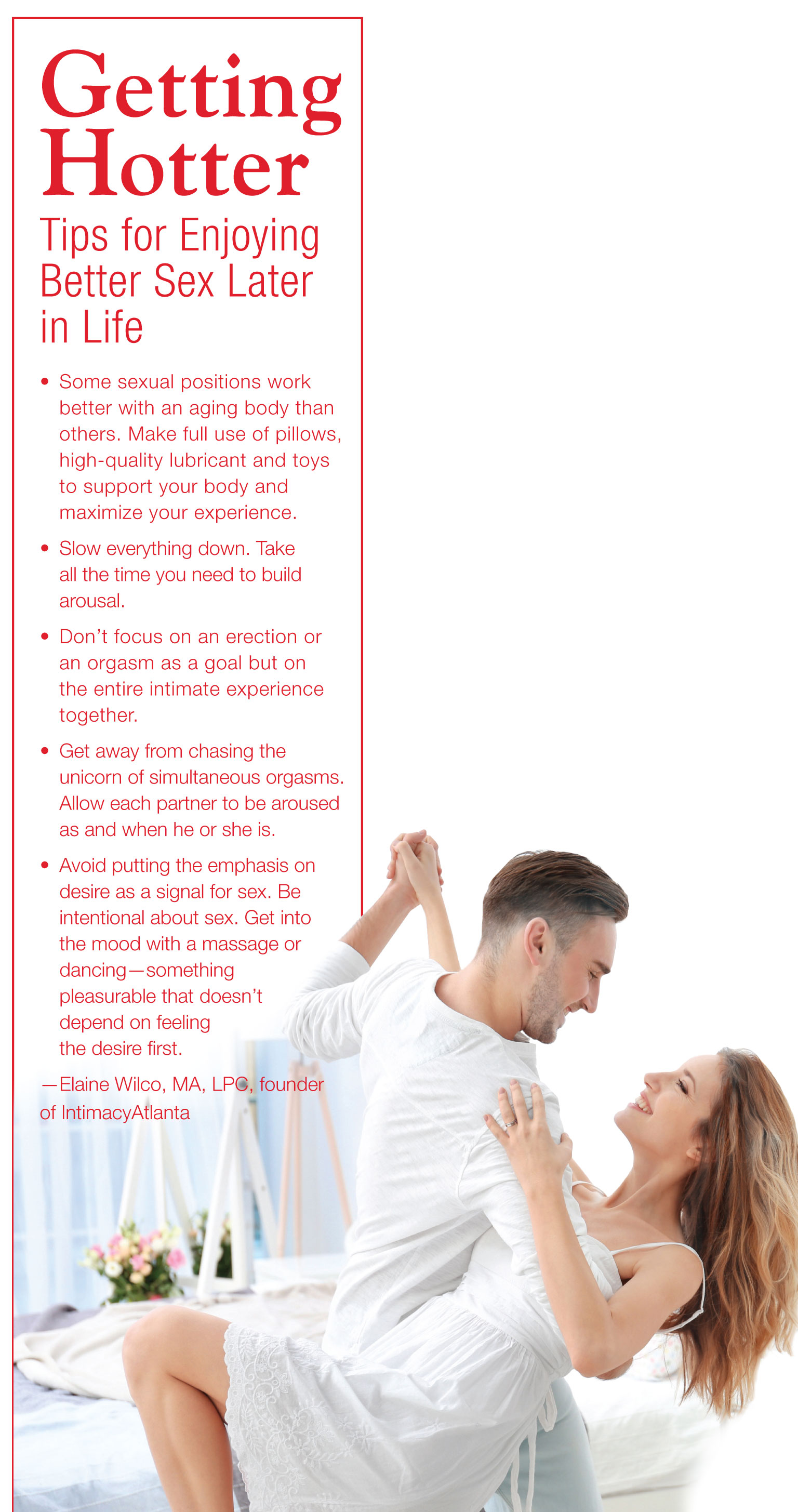 Even if there are health conditions that affect one’s ability to have intercourse, such as cardiovascular problems, diabetes or hormonal issues, Miller says, adjustments through hormone replacement, oral medications or diet and exercise can help get things back on track. For those struggling with erectile dysfunction, Tariq Hakky, MD, of Advanced Urology suggests adopting healthy lifestyle changes, vacuum erection methods, penile prosthesis and more. When dealing with the aftereffects of a major health event, such as a heart attack, it’s important to keep the expectation that sex will return in time, and to explore forms of intimacy beyond intercourse.

Miller points out that age can bring one very distinct physical advantage when it comes to sex. “Certain things, physically, we get better at with age. When we’re younger, we may be faster and stronger, but when we are older we have lots of endurance,” he says. He adds that later in life, certain stressors such as young children and demanding work are less of a concern and it’s easier to relax and focus on enjoying the relationship and physical intimacy.

Atlanta-based sex coach Haley Helveston, founder of Holistic Health with Haley, specializes in helping women reconnect with their sexuality. She says that clear communication and a deeper understanding of our own bodies are the keys to sex getting better as we get older.

“Sex and pleasure are limitless,” Helveston says. “There is a life force energy in sexuality that many don’t tap into. It can be a spiritual awakening and life-changing experience to discover the various types of orgasms that are possible.”

It is also crucial at any age, Helveston says, that a woman knows her own body very well. “Many women assume the guy is going to know what to do,” she says, “but all bodies are different. A woman needs to know how to please herself.”

Clearing the Negativity for Better Sex

Wilco says the deeper sense of inner connection within oneself that can happen with age also enhances the potential for a more enjoyable sex life. “So many women deny themselves being comfortable sexually earlier in life because of what they believe they ‘should’ look like. If a sexual response is based on appearance, then it’s going to decline with age,” she points out.

As both women and men clear away the subconscious blocks, negativity and “shoulds/shouldn’ts” around sex, it opens up endless possibilities for continued enjoyment and expansion together. “Sex should get better as you get older,” Helveston says. “Don’t believe the negative perception that it’s going to be bad and boring. You get to constantly evolve and grow yourself sexually.”