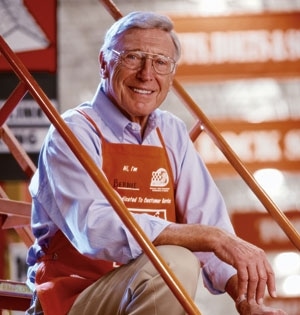 Bernie Marcus is a man with many titles – pharmacist, visionary, entrepreneur – but these days, it is the role of philanthropist that describes him best. His generous monetary donations have funded a number of projects and organizations including the Georgia Aquarium, Autism Speaks, The Marcus Stroke and Neuroscience Center at Grady and The Marcus Autism Center. Marcus is also on the board of directors and an active volunteer at the Shepherd Center, so it came as no surprise when he was awarded the William E. Simon Prize for Philanthropic Leadership in 2012.

As the son of Jewish-Russian immigrants growing up in Newark, New Jersey, Marcus learned about charitable giving from an early age. “Those who are Jewish understand the word ‘tzedakah,’ the obligation of generous charitable giving,” he says. “My mother believed – and she was right – that with tzedakah, the more you give, the more you get.”

Marcus says he always had a passion for medicine, and even considered becoming a doctor before earning a pharmacy degree at Rutgers University. Initially he worked as a pharmacist at a drugstore, but soon became more interested in the retail side of the business. “Early in my business career, I learned about the City of Hope,” Marcus says, which is a leading cancer research and treatment center in California. Though he couldn’t yet contribute a lot of money to the cause, he devoted his time and energy by holding industry fundraisers. “In those days, I didn’t have much money, but I put my body into it, my soul into it.” 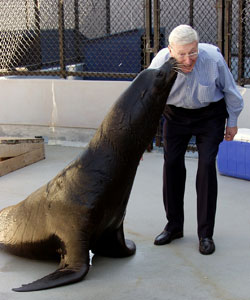 Ultimately, Marcus says it was his role as co-founder of The Home Depot that helped him become a true philanthropist. “First I was an entrepreneur; that enabled me to become a philanthropist,” he explains. “I believe in free enterprise. It’s what made our success at The Home Depot possible.” Through meaningful donations, Marcus wants to ensure the strength of the free enterprise system so it can provide the opportunity for success to millions of others.

With the inception of The Marcus Foundation in 2002, Marcus wanted to narrow his focus and support the causes closest to his heart. “I knew that bits of money here and there – what I call the buckshot approach to giving – wouldn’t maximize the impact of our giving,” he explains. “We decided to narrow the field to those things that I was really, truly interested in: children, medical research, the free enterprise system, the community, Israel and Jewish causes. I like to say we find a need and we fill it.”

And that is exactly what he did. In 2012, The Marcus Foundation donated $20 million to establish Piedmont’s Marcus Heart Valve Center. “Piedmont wanted the expertise in Atlanta and wanted to be the first to provide it, and actually recruited me,” Marcus says. “Piedmont came to me when it was ready to make provisions to train doctors and nurses, recruit specialists, and secure the equipment to make it the premier heart valve repair hospital in the United States – a one-stop shop both for patients with heart valve problems and for physicians who want to learn the latest advancements in treatment.”

But like every investment by The Marcus Foundation, they don’t just write a check. “We set targets on funds we donate, and review plans,” Marcus says. “And we are very satisfied that Piedmont is proceeding, even ahead of plan, because they have done so many procedures successfully. With Dr. David Adams and Dr. Frederico Milla, we have a valve surgery leadership team that can match any of the great ones in the country, even the world!”

The center, which opened its doors in January of this year, also aims to draw more top surgeons and other specialists to Piedmont Atlanta Hospital. As a regional reference center, it will be the nation’s first comprehensive valve center for care, training and research, regardless of the valve in which the damage occurs or whether it is congenital or acquired. “The key is to have the expertise here so that people don’t have to leave the state to have this surgery,” Marcus says. “It’s going to be very good for the people of Georgia. I see it becoming a center of excellence for Georgia and the Southeast.”

Through The Marcus Center’s annual donations of about $40 million, Bernie Marcus will no doubt continue making a positive impact on the people of Georgia as well as people across the country. And after nearly 30 years of charitable giving, the ‘tzedakah’ clearly remains his life’s greatest motivation.

Who do you most admire and why?
My mother provided the ultimate guideline for my life. Although she was crippled with arthritis from an early age, and bedridden, she instilled in me optimism, determination, tzedakah, patriotism and belief in America.

What is the best piece of advice you’ve ever received?
[My mother] told me never to look back, that the way you handle and deal with life’s setbacks becomes the basis for what you accomplish in the future.

What is the best book you’ve read?
I particularly like to read biographies of historical figures like Churchill, Reagan and Lincoln. These are people who had ability to change the world in their lifetimes. I also enjoy mysteries.

What is your favorite way to relax?
Playing golf. On the golf course, everything else goes out the window and you concentrate on your missed putts and bad shots.

Who are the people who help you be your best self?
I have been fortunate to have a lot of special people in my life. My mother, my wife Billi, who supports everything I do, my partners in creating The Home Depot – Ken Langone, Arthur Blank – and a slew of people I have learned from and many others I continue to learn from every day.